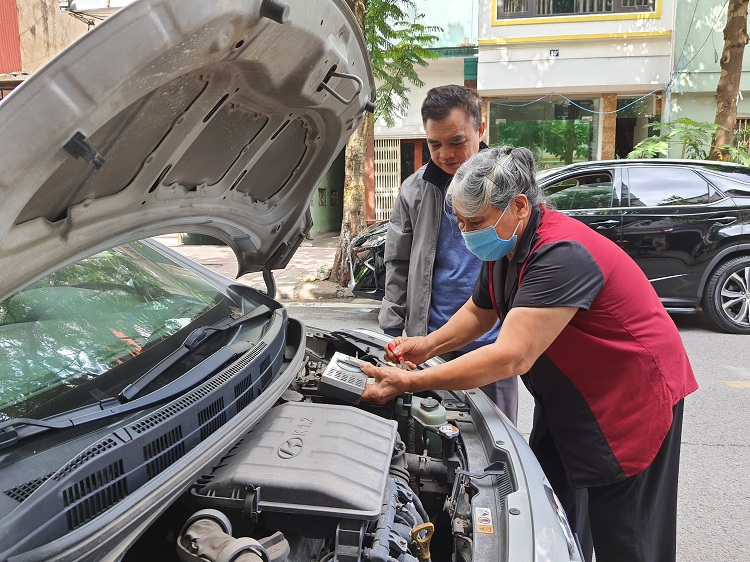 HanoiSquinting to observe the battery that the customer has just brought, Ms. Sam, 72 years old, caught sick: “This one has three sticky poles, two musty poles. Must replace it”. The guest nodded slowly.

“I have been a client of her for the past 5 years, so know, she said it is a failure. There is no cure,” said Mr. Tran Xuan Huong, 36 years old. He is a customer opening a shop for Ms. Sam’s shop at 46 Ngoc Lam, Long Bien, in the morning of late November. “Her specialty is that she does not need to check by machine, only with her eyes, she can read disease of the vehicle or the walled battery “.

Going to the row of batteries stacked in the shop, Ms. Sam chose one and then instructed the customer how to install. The driver listened attentively.

More than 50 years ago, Hanoi female student Nguyen Thi Hong Sam was sent to study electric car for four years. Graduated, Hong Sam was assigned to work at the auto maintenance and repair workshop of Thai Binh transport – bus enterprise. Back then, colleagues often wondered why a Hanoi girl would go to the province to work all the time, she just said: “Where the government put, I do it”.

Five years later, Sam was transferred to Hanoi, as the captain of a fleet of 10-man vehicles, with only two women – specializing in repairing and maintaining all kinds of cars. “Many days under the car, my legs must be propped up to support the trailer (engine starter), as heavy as a pig, and with her hands fixing the machine, “she recalls. At the age of 45, doing the right job, the woman was transferred to the office. She was familiar with oil and engines. tolerating the “leisurely” scene should apply for early retirement.

At home, the woman buys a spare part, continues with the work she studied and worked with during her youth. The sign “Repairing electrical appliances” was erected on the front door of the house when she had three children, her husband was doing research and writing books.

The neighbors around seeing her open a shop and everyone laughed. “Why don’t you get a job that suits the woman. Fixing these three things is just messy and hard,” some people advised. “I lost my education, wasted a lot. Everyone wants to sit in their desks to be beautiful, then we can’t find someone sweeping the garbage”, she replied.

Every day, she is in a bun high in her hair, dressed in a dark coat, repairing motorbikes, cars, and household electrical appliances for people around the area. Trucks, buses, cranes … any car you can jump on and drive.

Being a person with a lot of experience, but customers most appreciate her devotion to her guests. Mr. Dang Minh Dao, in Ninh Binh City, recounts the first time he met Sam more than 20 years ago. That time, while driving through Gia Lam, the generator was on fire. The car stopped in the middle of a crossroad, and the man around the area pointed to Mrs. Sam’s shop. There are no spare parts, the shop owner sits and wraps the wire for customers from morning until 10:00 pm.

“The work is meticulous, has to wrap the rope so that it is enough, and it takes a lot of time. I wait too long to go to the restaurant to sit, and she eats a bowl of rice and fixes it because she knows I need to hurry. , Mr. Dao said. After that time, the two were no longer in contact. But last year, hearing an acquaintance in Ngoc Lam say her husband passed away, Mr. Dao sent a telegram. He said: “Lifelong working as a driver, but I cannot forget her devotion”.

Expertise, Ms. Sam rarely disappoints customers. Once, a customer drove a car in front of her shop, and blamed: “See, a new battery bought from your place but now the car doesn’t explode. You warrant me to go”. While fixing the fan, brushing her hands on her pants, Ms. Sam came to check. After checking, she confirmed that the battery was not faulty.

“You can hear that, I’m not sorry, why can’t I,” the man scowled. “It’s not impossible, it’s a good time, sometimes no. Right?”, She asked calmly again. This person nodded.

“It is because the electric wire connecting the generator to the battery sometimes gets sticky and drains the electricity. You just imagine the generator is the place where food is loaded into the battery – something is like the stomach, and the wire is the bridge. How can I consume food? “, Explained the lady. After that, Ms. Sam fixed the wire for the customer, cleaned the relay because it was dirty. The engine is good, the guest at that time “admires, dress” said thank you.

Over the years, except when she was sick, she rarely closed her shop, did not even dare to travel, because she was afraid that “customers who come looking and do not see them will miss their jobs”.

Five years ago, more than 10 p.m. on the 30th of Tet, Mr. Nguyen Van Dong, 52 years old, had just finished working. From his office in Nguyen Trai, Thanh Xuan, he drove home to Long Bien. Near Ngoc Lam Street, the car suddenly broke down. Seeing the sign in front of Mrs. Hong Sam’s house, he took the phone and called for good luck. After a few rings, the woman picked up the phone. In the process of preparing a tray for New Year’s Eve, Ms. Sam still sent her grandson to open the door to repair the car to help customers.

“The streets are deserted, the shops are closed. I risked to see if anyone could help. In the middle of that time, she not only helped repair but also instructed how to use the car in a durable way”, Mr. Dong said. Recently, the battery used by Mrs. Sam was broken, Mr. Dong went back to the old shop and talked about the old days. The mechanic’s hair was now turning gray.

Old age, declining strength, for decades, she repaired little cars but specialized in selling and repairing batteries for customers. If someone accidentally breaks down the car along the way or late at night, she will repair it.

Since she was young until now, Ms. Sam rarely wears makeup and hair, even during holidays or Tet, because she is afraid that someone will suddenly call. “I don’t have to sit in the office to wear make-up,” she laughed, splitting her big, rough, oil-stained hand, likening it to a man.

“In my childhood memories, she was always smudged, hiding under the car. Now she does not fix it, but sometimes she still has to carry the batteries weighing tens or even tens of kg. I want to help her but She said she had to have a trick to carry it, “recalled Ms. Hoang Kim Ngan, 42 years old, Sam’s second daughter.

Three successful children were also when Sam was old and weak. The children hold a family meeting that wants their mother to quit her job, but every year she promises “she will leave next year”. The old woman was unhappy when the car repair shop had closed the door all her life. “I want someone to teach car repair, but none of my three children will follow,” said the mechanic.

Once, Sam’s three children hired someone to pretend to buy a shop and apply for an apprenticeship so that her mother volunteered to “retire”. Seeing someone coming to say what she meant, the old woman was glad to face. “The more she expressed her joy, the more upset we became. Afraid that she would be sad and angry if she was deceived, the brothers did not dare anymore,” Ngan said. When the father passed away, her children had more and more reason not to force her to rest.

A few days ago, Ms. Ngan went on social media to tell a story about her mother. “She is old and weak, and she is careful so she will work longer than others. I hope anyone who lives around Long Bien has more time to visit her shop. It is crucial that her mother can do what she likes, someone Chatting to help relieve sadness “, Ms. Ngan shared.

After noon, Ms. Sam was still engrossed in chatting with the first time visitor. “So when will you retire for the second time?”, The guest asked the old woman. “I work until I lose my teeth. I will stop next year”, Mrs. Sam smiled.

“Every year I always hear her say that sentence and never feel any rest!”, The daughter sitting next to her teasing her and the mother and daughter laughed.