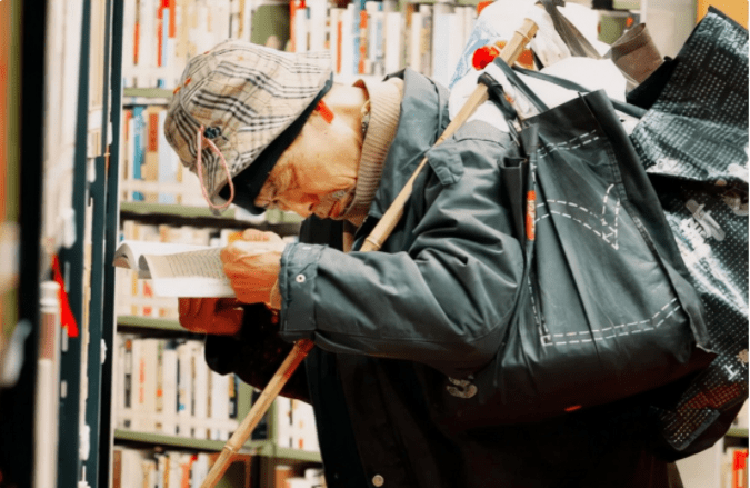 ChinaRetired with a high enough salary to live comfortably, but all were surprised because Vi Tu Hao was still frugal and went to pick up trash around the city every day.

Wei Si Hao was born in 1938 in Indochina city, Zhejiang province. At the age of 19, he entered the Chinese language department of Hangzhou University and became a secondary school teacher upon graduation.

During his decades of teaching, Vi Tu Hao has met many talented students who were forced to drop out of school due to difficult circumstances. Seeing many children say goodbye to teachers and friends in tears because they could not continue their studies, his heart sank.

Vi Tu Hao decided to use his meager salary to help some poor students in the school. Because of the small amount of money, they have to support their wife and children, so they can only help a few people.

In 1999, before retiring, teacher Vi met with the principal of the school he was working for and expressed his wish to establish a scholarship fund to help students with good achievements but could not go to school. However, his simple appearance and somewhat austerity made the principal not believe that he had the money to help the children. After being rejected, Vi Tu Hao had to leave, bringing regret.

When he retired, even though his monthly salary was 5,600 yuan (20 million dong), Vi Tu Hao still decided to pick up trash. This act of his surprised his three daughters as well as acquaintances. They murmured and criticized their unfilial children, so the father had to work hard at the age he should have rested. Immediately a family meeting was called. The children wanted to take their father back to live with them for convenience, but Vi Tu Hao firmly refused.

Every day, this man still picks up trash around the city and surrounding areas. He lives alone in the old house. Many times, the children suggested to repair the house, but Vi Tu Hao did not agree, asking them not to waste it because the current house is still good enough.

Everything went on until 2014, a reporter caught Vi Tu Hao reading a book at the Hangzhou library. In the article, this reporter described, meeting an old man in his 60s, carrying a bag of plastic bottles and scraps of paper on his back, entering the library. Before borrowing books, Mr. Vi neatly stored his belongings, went to the sink to wash his hands, and then took the book.

“Unexpectedly, a man picking up trash would cherish and cherish books so much,” the reporter took pictures of Vi Tu Hao and wrote what he witnessed. Librarians say he never reads magazines, but is only interested in news, literature and history books. He quickly became famous on Chinese social networks.

However, at that time, everyone thought that Vi Tu Hao was just a garbage collector who loved books. Many parents even took a picture of him reading a book in the Hangzhou library to inspire their children. Very few people know, Mr. Vi is a retired teacher with a high enough salary to live comfortably.

In an interview with the media, talking about his reading habit, Mr. Vi said: “When I get old, my brain will shrink. I have to regularly recharge and train my brain by reading. my spiritual support”.

On December 13, 2015, on the way to pick up trash, he was hit by a car. After nearly a month in the hospital, the man died from his injuries.

After taking care of the funeral, his children went home to collect their belongings. In my father’s house, there is only one chair and a few chairs, the rest is empty. Vi’s eldest daughter once questioned her father why the pension was so high, but he lived so frugally. He replied: “Alone, you don’t need a lot of things. Just feel comfortable.”

The daughter shared, once she saw a long bloody wound at the foot of her father. When asked, he replied that he fell while going up the stairs in the library. “There was a loving woman who took him to the hospital. But when he got there, he just bought bandages and medicine and left,” the son said.

Knowing the story, the daughter argued with her father. She blamed her father for not knowing how to love himself, living in poverty, and in order to bring fame to his children and grandchildren. Even when he passed away, she did not stop blaming: “If my father had not gone to pick up trash but returned to the children to take care of him, he might not have died so painfully.”

However, when cleaning the house, the three daughters found an iron box, which contained a lot of receipts and letters. Only then did they understand that for the past 21 years, Mr. Vi has sponsored many students with difficult circumstances.

According to the receipt, Vi Tu Hao has been sending money since 1994 under the name of Wei Dinh Trieu. Over the years, he often kept in touch with the children he sponsored. When the children sent letters, he patiently responded.

In the iron box, there is also a record of this man’s body donation. Vi Tu Hao wishes that, after his death, he will donate what is left of him to those in need.

When knowing the truth, Vi’s three daughters decided to call on friends and acquaintances to raise money to continue the work that their father was unfinished. Many people proposed to have a statue of him.

Today, when going to the Hangzhou library, people will see Vi Tu Hao’s statue from the moment they step foot in the door. Under this statue is engraved the words: “He is gone, but his spirit remains” by a famous professor at Zhejiang University.