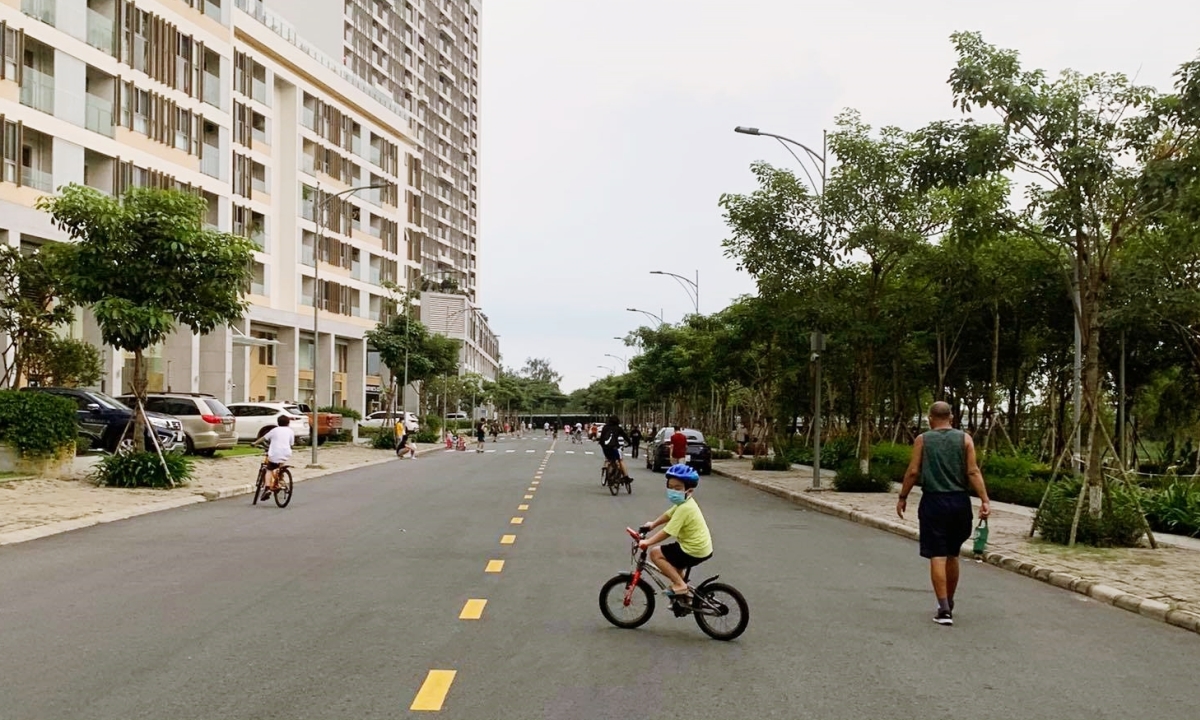 At 5 pm on September 27, Marvin Contapay, 27 years old, put on sports shoes, walked “like a bird in a cage” around the apartment, after nearly 4 months of only hanging around 4 walls.

“Today is my first day out to exercise,” said Marvin, a Filipino English teacher, a resident of Sky Garden 1 apartment complex. “It’s nice to see signs of normal life returning.”

From September 16, District 7, Cu Chi and Can Gio districts became the first three localities of Ho Chi Minh City to start piloting “opening” according to the roadmap, allowing people to go to supermarkets and traditional markets. , essential services. Particularly in District 7, people who have received 2 vaccinations in Tan Phu and Tan Phong wards are allowed to walk, exercise, and do outdoor sports at 2 parks and 5 tennis courts.

For Marvin Contapay, these changes are a “gift of gold”.

“Living during a pandemic is not easy, especially for foreigners living in foreign lands,” said Marvin, who has been in Vietnam since 2018. During the distance between Ho Chi Minh City and the Philippines, the Filipino man faced many difficulties. The English Center is temporarily closed. Using food vouchers or ordering online also faces many obstacles. His psychological instability, energy and mental health “slope” when staying at home for too long. Over the past several months, Marvin has only gone out a few times to go to the supermarket and get vaccinated.

“Most of the shops are not open yet, and the streets are not very crowded yet. But we are grateful that the pace of life is slowly returning to normal. The tennis courts at Sky Garden have also reopened. At least we are. was able to breathe air to relieve the feeling of boredom,” Marvin shared.

To go for a walk, breathe in the air or look at the sky, used to be very normal. During the pandemic, these activities have become a luxury again. There is also a feeling of relief like Marvin, but for Truong Thien Ngoc, 33 years old, in My Gia 2 neighborhood, Tan Phu ward, the past few days have been “like a dream”.

“Since September 19, my family’s first job is to order food through the app. Although there are quite a few shops open, but after many months of self-cooking, the food outside the restaurant is delicious anyway,” said the owner of the gold shop. in District 1 said.

Since Tan Phu ward allows people to go out to exercise, every day Mr. Ngoc takes the children to the park 100 meters away from home to ride bicycles and play rollerblades. “Since yesterday, the children have been to the park twice a day,” said the father.

According to Mr. Ngoc, District 7 has piloted opening since September 16, but residents of My Gia 2 neighborhood only go out for a walk more from September 25 with timidity. The pace of life has not returned to the way it used to be, but “at least it’s not quiet anymore”. During the times when I took my children to the park, sometimes there was the sound of laughter or the conversation of couples walking, also made him “feel emotional”.

“On the days of separation, it’s very quiet here. Not a single person on the street. Even the squirrels in the surrounding parks calmly climb into their garden,” Mr. Ngoc said.

“What’s happened in the last four months has made me appreciate life so much more,” he added.

Happiness, for bank employee Tran Phuc, is to go back to work. On September 23, a 28-year-old young man, living in Tan Thuan Dong ward, still felt a little surprised when he got in the car to go to the company, after three months of working from home. “The first day at work, I felt excited and a little nervous as if I had just been hired,” Phuc said.

District 7 also allows people in green areas to buy essential goods through distribution channels at 9 supermarkets and 154 convenience stores from September 16, but Le Thi Lien, 29 years old, lives in Binh Thuan ward. not yet confident to go out, still afraid to come into contact with the crowd.

“When entering the supermarket, pushing a heavy cart, and smelling fresh food, it feels very different,” Lien said of the “special feeling” after the first supermarket visit on 23/03. 9.

According to Standing Deputy Secretary of the People’s Committee of District 7 Tran Chi Dung, after 10 days of easing some activities, the number of new infections in the locality did not increase, the social situation was basically stable. District 7 People’s Committee also said that in the first week, the locality distributed more than 41,500 shopping vouchers to people in the “green area”, of which more than 12,300 people went to the market (a ratio of nearly 30%). It is expected that sports activities will be expanded to 10 wards from October 1 with stadiums, indoor sports clubs and parks with simple exercise equipment.

In addition to easing the distance for people’s activities, Cu Chi and Can Gio were also assigned the task of piloting the opening of tourism, a basis for the city to apply to other localities after Covid-19 was controlled. .

At 9 am on September 19, Ms. Tuyet Loan in Ly Nhon commune, Can Gio district, welcomed the first group of guests back to Vam Sat eco-tourism area, belonging to the Can Gio bio-rights reserve. It’s been a long time since she’s been wearing makeup, wearing a receptionist uniform after spending days at home with “messy hair”.

“Very nervous and emotional. The scene here is like being revived”, Ms. Loan said. She happily greeted the guests on the pilot tour, then guided everyone to the services at Vam Sat, and coordinated the group bus. At 11 am, she was busy serving customers at the restaurant. “The first day of work, there were still few employees, quite tired, but I was very happy,” said the female receptionist of the resort.

Due to the outbreak of Covid-19, Vam Sat eco-tourism area has been closed since May 28, right in the peak season every year. Tours were stopped, the income of employees like Ms. Loan was severely affected.

In the roadmap of pilot opening in 3 districts, the district has controlled the epidemic, Cu Chi and Can Gio are assigned more tasks of tourism development. From September 19, the tour to Can Gio has been resumed, initially for the medical team, the force participating in the frontline of epidemic prevention. A few days before Vam Sat opened, Ms. Loan and her colleagues cleaned tables and chairs, weeded, swept leaves, ready to welcome guests back.

“Finally, I was able to go back to work. On the first tour, a doctor even said that it took a few months before I could hold a bowl of rice because I had eaten boxed lunch for a long time,” Ms. Loan said. From September 19 to September 28, Vam Sat eco-zone has welcomed 3 pilot groups and is expected to continue to welcome many closed groups after September 30.

Tuyet Loan’s joy of going back to work is somewhat similar to the wish of English teacher Marvin Contapay. “Right now, what I’m most concerned about is when will the English center reopen to welcome students,” said Marvin.