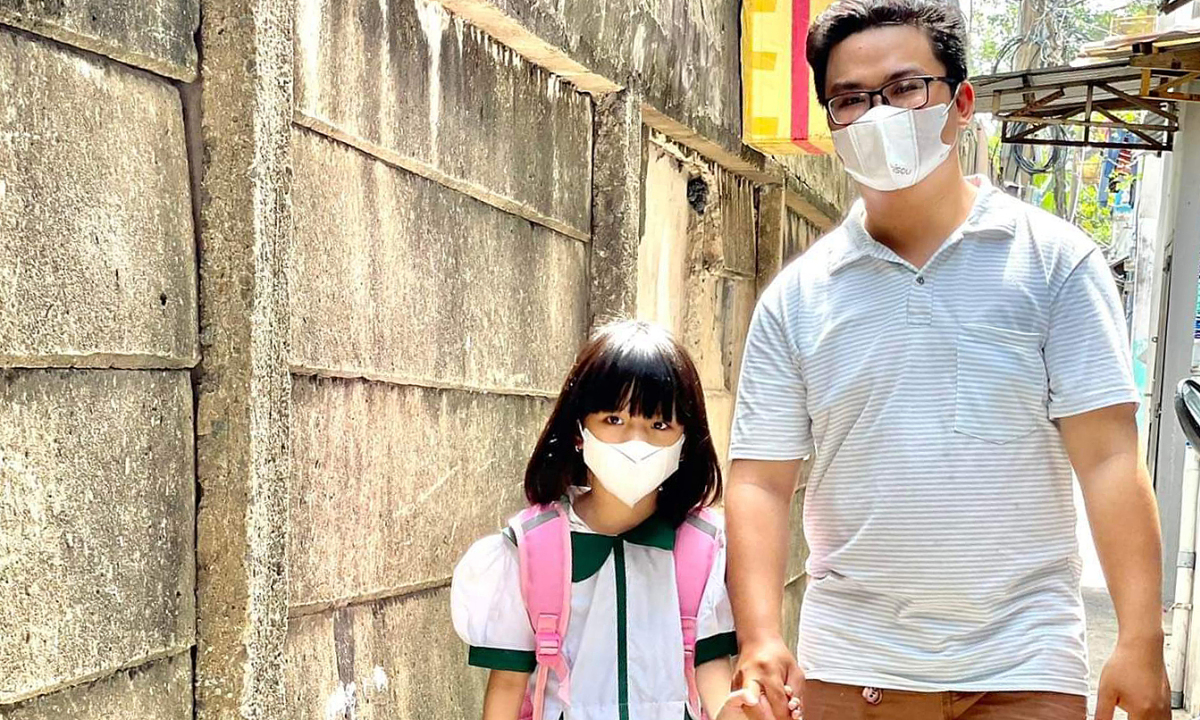 Ho Chi Minh CityHolding the certificate of responsibility to raise her 8-year-old granddaughter Le Nguyen Hoang Anh until adulthood, Dat knows that his life has turned to a new page from now on.

“Grandmother, great-grandmother has passed away, can Hoang Anh live with you now?”, 22-year-old Nguyen Phuong Quoc Dat looked at the two pictures on the altar and then hugged her granddaughter, her eyes red.

Baby Hoang Anh is Dat’s biological grandson. Eight years ago, her mother brought her one-month-old daughter back to her grandmother, Nguyen Thi Tuong, while she went to Malaysia to work as a hired worker.

In the first four months, Hoang Anh’s mother still sent money and called to ask about her son, but from the fifth month, the woman was silent. In a dirty house with many peeling walls, 28 m2 wide on Ton That Thuyet Street, Ward 18, District 4, Ms. Tuong became the mother of an orphaned great-grandchild when she was only a few months old.

In addition to her savings, she went to help a shop selling noodle soup at the alley, receiving 50,000 dong a day. “My grandmother said it was hard to raise Hoang Anh well, send him to school, because he loved his great-grandchildren abandoned by his parents”, Dat said and said that he also worked part-time, hoping to support his family.

Growing up in the love of her great-grandmother and uncle, little Hoang Anh is very active, talkative, gets along with friends, loves going to school. “She’s only eight years old, but she’s very understanding, never asks to buy new clothes or food, even knows how to help with housework when adults go to work,” the uncle said.

In August 2021, her great-grandmother contracted Covid-19 so Hoang Anh was sent to a relative’s house to stay for a few days. But that was also the last time the 8-year-old girl saw her great-grandmother. At the time of death, knowing that she could not see her grandson for the last time, Mrs. Tuong told Dat to try to raise Hoang Anh, not to leave school in the middle.

The day he got home, Hoang Anh ran everywhere looking for him, but only found a picture of him trying to put it on the altar. A few days later, two jars of ashes were returned to her family, and the little girl learned that her grandmother and grandfather were no longer there. Since then, I have become quiet and cry every night. “In the past, I could sleep with my great-grandmother and uncle. Now it’s only you, or is the great-grandmother seeing that the bed is tight so she leaves, making room for her nephew?”, the little girl said to him.

“Not yet a year old, I lost my mother, now I am an orphan again, how can I withstand this shock,” Dat sighed.

When her great-grandmother died, the family’s economy was increasingly depleted. Dat goes to clean the house every day or hires anyone to do it, but he has suffered from heart and lung disease for more than a decade, now turning into pulmonary fibrosis due to having been infected with Covid-19 making his health increasingly weak. In a very healthy month, Dat only earns about 1.5 million VND. He said, many times when he was at work, his face was bruised, he couldn’t walk, he had to sit on the ground gasping for breath because of exhaustion. However, the 22-year-old boy did not dare to stay at home for a day because all the money to buy medicine and raise his grandchildren depended on him.

“Hoang Anh’s tuition fee was waived last year, this year I am expressing my aspirations, hoping for support from the school. Particularly, 2 million dong of my grandchild’s Covid-19 orphanage allowance each month is kept separately, waiting for my grandchild to grow up. there will be business capital,” the uncle confided.

Every morning Dat gets up early to prepare food, takes him to school about 100 meters away from home, then comes back to clean up and prepare to go to work. In the afternoon, he did the laundry, cooked rice, and then studied with his grandson. Before going to bed, the two boys reminisced about stories with great-grandmothers, making Hoang Anh’s face radiant. She quickly talked about the days when she tried to go to the market, cook rice or the moment the whole family cleaned up and prepared for Tet.

At the end of the month, he wrote an application and was confirmed by the People’s Committee of Ward 18 as the direct nurturer of his granddaughter Le Nguyen Hoang Anh on behalf of his deceased grandmother. Many people say that Dat is crazy when his illness is still carrying his nephew. “Relatives are still there, but everyone’s family is difficult. I consider Hoang Anh like a child, not willing to leave. Not to mention I also made a promise to my grandmother to take care of my granddaughter until the age of 18,” Dat explained. .

Ms. Chau Thi Quick, the leader of the 24th street, ward 18, said that Quoc Dat’s family was in difficult circumstances, and the neighborhood group and local authorities were very concerned. Whenever there is support for the family of someone who has died because of Covid-19, Hoang Anh’s grandson receives gifts.

Currently, the two boys and girls live in a severely degraded level 4 house, with cracked walls, peeling, sagging roof that needs to be repaired. “We have proposed to the ward to repair the house, because we don’t know when it will collapse, but we still don’t have enough funds and resources to do it. We hope that you can often join hands to help.” Ms. Chau said.

Taking on the responsibility of being the father and mother of his granddaughter, Dat admits that there are times when he has difficulties when he is still awkward and clumsy in caring and comforting, but is trying to change day by day. He began to learn how to tie his hair, choose clothes according to his taste, learn to cook delicious food, try to understand psychology and let his granddaughter participate in community events so as not to feel inferiority.

Like on August 28, Hoang Anh and him will participate in an exchange program in the Vietnam Wishing Program at Giac Ngo Pagoda (HCMC), in order to share stories and overcome events. “I hope my granddaughter can express her feelings and convey the most positive life message to those in the same situation,” he said.

As for Hoang Anh, the girl still whispered to him: “You Dat try to raise and send him to school. When he grows up, Hoang Anh will earn a lot of money for him to treat and raise him”.

Loving you, the 22-year-old boy told him to give the best for him. “I don’t know if my illness can last until my niece is 18, but I’m still alive and in good health, I don’t let Hoang Anh be deprived as promised to my grandmother,” Dat confided.

Underprivileged children will have a better life when they receive the help of the whole community. To accompany and support disadvantaged children, readers can support here.