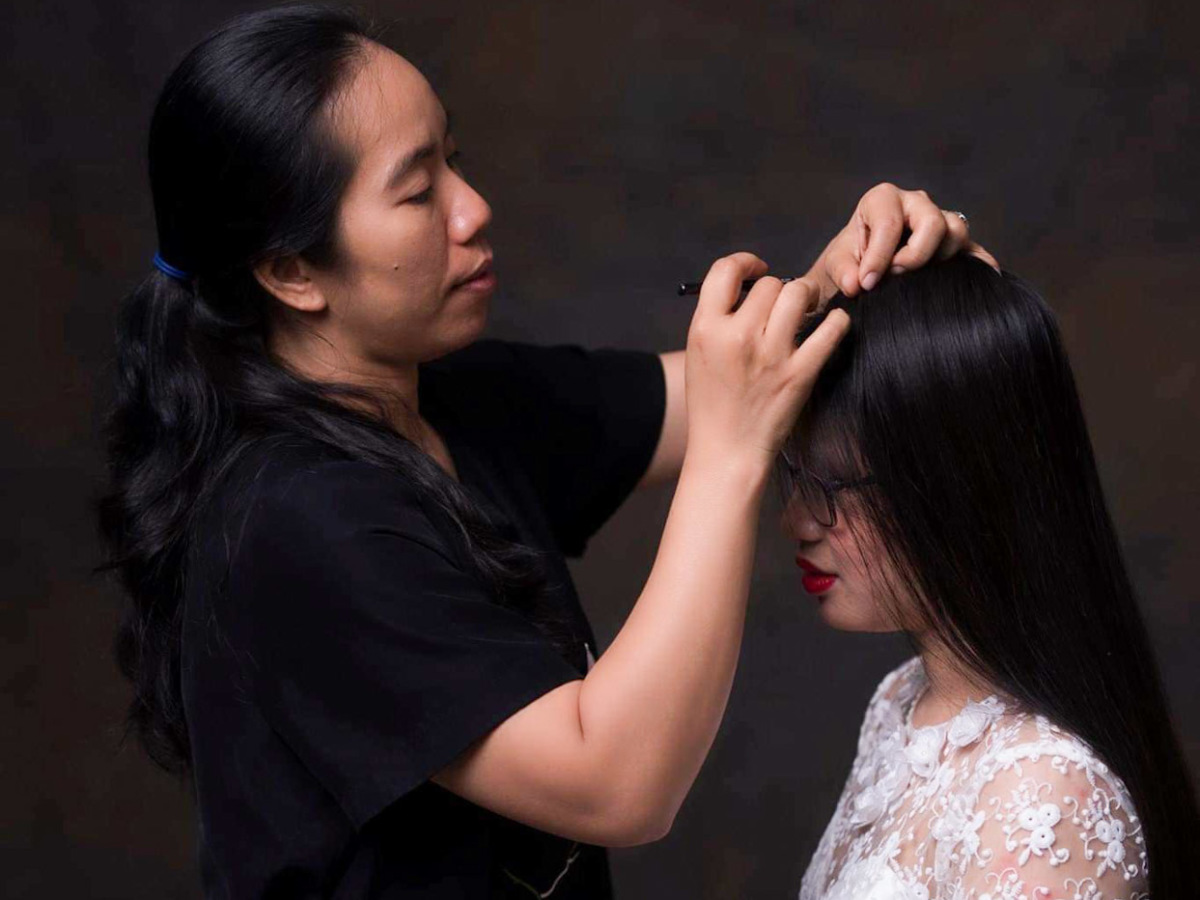 HCMCSince her birth, Anh Thu has not seen the light, but thanks to 18 years of her mother’s companion, she became the first blind student of the Ho Chi Minh City Conservatory of Music.

In a small room on the 4th floor of an old apartment building on My Canh Street (District 7), Do Nguyen Anh Thu glides his hands on the keys, the Beautiful bamboo resounded. Being born blind, when he finished pressing a key, Thu’s hands had to immediately move to the next key, instead of leisurely playing the piano and looking at the music in front of him like a normal person. To play this song, Anh Thu had to memorize the music theory dozens of pages.

Anh Thu’s mother, Nguyen Thi Hoa Hong confided: “In the past, I let my children learn the piano and learn many other subjects such as swimming, drawing, chess … to make their life more colorful. I dare to think one day I can go to the conservatory, perform with ordinary human musicians in a choir in front of hundreds of spectators “.

Eighteen years ago, the little girl Anh Thu, from Rach Gia, Kien Giang, was born “28 weeks in the womb”. After more than a month in a glass cage, coming home, even though she saw her baby healthy and plump, the young mother felt insecure when she looked into her childless eyes. Examination, the doctor diagnosed Anh Thu with permanent blindness, possibly due to retinal detachment caused by preterm birth.

From that day on, Ms. Hong often tried to close her eyes while walking indoors to understand the blind person’s feelings and activities, to prepare for the days accompanying her children.

Her eyes were lost but in return, Thu’s ears felt very good. From the age of one, she can distinguish many sounds and voices of people in the house. When listening to the voices of visiting visitors, Anh Thu listened and always guessed the correct number of people.

At that time, Rach Gia did not have a school for visually impaired children. My son was three years old, but no kindergarten accepted. The mother taught her to stay at home. To simulate the blind’s braille, Hong took the beads attached to the cardboard to teach words and spelling. Initially, she made letters with large seeds, gradually shrinking them to make her hands more skillful.

Seeing that her son likes dancing and singing, is gifted in art, the mother hired a teacher to come home to teach him the organ. Without a textbook specifically for the blind, she had to change herself from a normal textbook to a beaded braille form to teach her children. Your child’s lessons are also mother’s lessons.

“I told her, if he does not have eyes to see, take a deep breath, listen carefully and touch everything around a lot to make up for his or her shortcomings”, Ms. Hong shared.

I was about to go to first grade, Mrs. Hong hid from her family, said she brought her to Sài Gòn for an eye exam, but actually went to Nguyen Dinh Chieu School to apply for admission. The child received was also the time when the mother resigned from her job in the countryside and went to Saigon to rent a boarding house.

With many years of experience working in a large telecommunications company in her hometown, Hong easily found a new job with quite a high salary in the city. But her work also forced her to leave the house early in the morning, pick up her children when the students in school were gone, leaving only Thu waiting for her mother in the security room.

Year Anh Thu was in 2nd grade, once studying at school, because of stress, she had to go to the emergency room. On the way to the hospital, she thought: “The purpose of my trip to Saigon is to take care of my children to school, not make money. Seeing my child lying motionless with all the pipes on my body, I decided to do something else, to have time to take care of the child “.

After resigning from her job, Hong rented a large house. Below, she opened a shop selling local specialties such as fish sauce, dried fish, and above it divided a small room for students to rent. Life only revolves around transporting children and doing business, and there are less times when going to the countryside to visit her husband.

From the year Anh Thu was 9 years old, Ms. Hong started to teach her children to piano methodically. Before finding a place to accept her children, Hong was rejected by many places for the simple reason that teachers did not know how to teach the blind. “Many people advised me to let my children learn ethnic musical instruments such as the gourd and zither, and the piano has no precedent, so they dare not accept it,” Hong said.

In class, she studied with her child, replacing her son to talk with other classmates. At home, mother and daughter sat down and translated hundreds of pages of Czech copies. Mom read the note name, I rewrite it in braille to practice by myself.

In 2017, Anh Thu won second prize in a piano competition in Ho Chi Minh City with the participation of 188 Vietnamese, Korean, and Malaysian contestants and became the first visually impaired student to be specially recruited directly into the City Conservatory of Music.

Master Nguyen Thuy Yen, a piano teacher directly to Anh Thu, shared: “The results that Anh Thu has achieved until today are indispensable for Hong’s mother. I still remember the seminars, masterclass. In the Piano department organized, Hong’s mother always accompanies me, Anh Thu has never missed a session, Thu’s attentive listening face, Hong’s happy expression make me and everyone around me. feelings of happiness spread and more optimism.

Studying the final year of the 4-year intermediate degree in Piano faculty, Thu was able to perform in many places. Along with her passion to bring the beautiful sounds of the piano on stage, Thu also participates in volunteer piano classes at Nguyen Dinh Chieu old school.

“My dream is to become a piano teacher. So being a continuation person, sharing and passing on what I have learned to others, I feel very happy,” Anh Thu said.

Before going on stage, she is always put on makeup, braided by her mother, and chooses luxurious outfits. On stage, the audience did not recognize Thu visually impaired until she was carried by others to greet the audience. “It’s not like I’m blind, so whatever I want to wear,” Ms. Hong explained.

“In the middle of last year, I took piano tutoring for a little girl. The first month of salary, I went to buy gifts for everyone in the house. Every dish I chose to give it to everyone”, Hong boasted.

Although she has allowed herself to fulfill the responsibility of a mother to her daughter, Hong always feels sorry for her husband and her paternal family for not fulfilling the responsibilities of a wife and child.

“Last year the Covid-19 epidemic, I and my children had only had the opportunity to return to their hometown for more than a month. Looking at my husband’s plain house and wrinkled office clothes, I feel sorry for him. I hope my family. soon escaped the “husband in one place, wife and children one way” scene as in the past 12 years, but it is not known when “, Hong said, her red eyes suppressed her sigh.