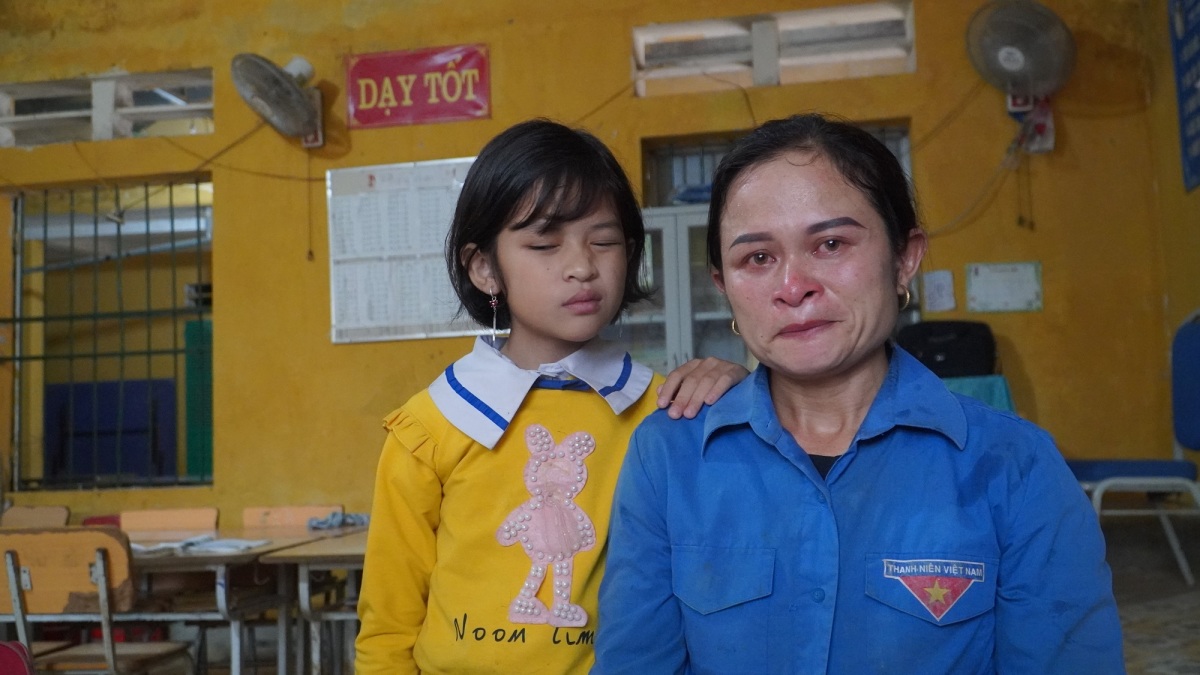 Dien BienTen years ago, when little Bao Oanh was born, she did not see the light, but the darkness did not frighten her because she was always accompanied by her mother.

With her wooden handrails, Ca Thi Bao Oanh slowly walked down the steps of the stilt house, underneath her mother had a motorbike waiting. Ms. Khoang Thi Chinh quickly pushed her legs aside and ran to help her daughter sit in the car. After the question “Are you sure to sit down?” and a nod from Oanh, Ms. Chinh started the engine and ran straight to school.

“One day, when I went to work far away, my son fell down on his own when he went to school. I panicked and ran home. Now, no matter how busy I am, I try to take my children to school,” said the 30-year-old mother.

The wooden stilt house about 40 m2 of the Oanh family is located on the slope of Muong Toong 1 village, Muong Toong commune, Muong Nhe district. Baby Bao Oanh is the oldest child in a family of two sisters. The situation was difficult, adding a drug-addicted father, all the burdens fell on Chinh’s thin shoulders.

Ms. Khoang Thi Chinh is from Thai ethnic group, from a poor family, she only studied until 8th grade. In 2010, Chinh got married. The thought that life would be less difficult, did not expect the husband’s family to suffer even more. Her mother-in-law died early, her father-in-law was severely addicted and was undergoing re-education in the district, leaving behind two blind brothers. Chinh and his wife take care of their children’s education on behalf of their parents.

In 2012, Chinh and her husband built a temporary bamboo house and moved out. At this time, Oanh was born with nearly 3 kg. Despite seeing her healthy and plump child, the young mother was still uneasy when looking into her child’s lifeless eyes. “For about a month, her eyes are still open and painful, I talk but she has no reaction at all, really worried,” Ms. Chinh said.

Struggling until the child was one year old, she noticed that his eyes were unusually large, afraid of light and kept squinting. Feeling unwell, the mother borrowed money from her grandmother’s house to take her child to a doctor in Dien Bien. Doctors diagnosed her with congenital blindness, but the cause was unknown. “Actually, I can’t believe my baby will be blind because he’s been healthy since he was born,” said Oanh’s mother with red eyes.

Returning home, Chinh still hopes to find the light for his son. She worked as a hired laborer, accumulated a little, borrowed 10 million more from a neighbor, and brought her children to Hanoi for examination. The results are still the same as before.

“Standing in front of the hospital, I hugged my baby and cried, then thought I was a useless mother, why would I give birth to a child to make my child suffer with me?”, Mrs. Chinh, holding her faded shirt, wiped her tears, recalling.

From that day, Chinh accepted the truth. She practiced walking around the house with her eyes closed to understand the feelings and activities of the blind, preparing for the months of accompanying her children.

When the girl was two years old, Chinh sent her to kindergarten. For a few times, I feel guilty when I just sit in a corner and can’t play with friends. She decided to leave the child at home. During the day, Oanh plays with her aunt and uncle who was also born blind in the house, and her mother goes to the upland. Returning in the evening, she spent time practicing for her children to bathe, feed themselves and help them feel the objects in the house.

Losing his eyes, but in return, Bao Oanh has a very good voice. When she was three years old, she loved to dance and sing, and wanted to go to school. I had to send my children to school. “In kindergarten, I went to a singing competition and won the first prize. I was very happy. Since then, I think that no matter how poor I am, I will send my child to school,” the mother confided.

Since then, every day at 4:30 am, Ms. Chinh gets up and cooks rice for her two children and her husband. Then she drove her children to school. Taking Oanh to the classroom, she left with peace of mind. In the afternoon, the mother again with a workwear coat covered with lime mortar at the construction work hurriedly returned to pick up her child. Just like that, for nearly 8 years of taking her children to school, Bao Oanh’s every step always had her mother’s shadow. Although I can’t see everything around me clearly, I am always reassured because my mother is my eyes.

Oanh said that one day when her mother went to work far away, she did not have time to pick her up, so she followed her classmates home by herself. “Once, I fell and scratched my limbs, since then my mother did not dare to let me go alone,” said the fifth grader of Muong Toong primary school.

Working so hard, in the evening, Chinh still spends 30 minutes reviewing math and reading to her children. “I’m afraid that in class, my children won’t be able to see the lesson,” she said.

It is said that two children are a great consolation in her life. Although she can’t see it, Oanh loves her mother very much, knows how to wash dishes and help her sweep the house. “Every time I’m tired, I keep singing. How many extremes I feel are relieved”, she expressed.

Four years of elementary school, Oanh always won the first prize in the singing competition at school. Ms. Ha Thi Duyen (32 years old), homeroom teacher said, every time Oanh took an exam, Ms. Chinh was always there to cheer for her son. “In this highland, most ethnic minority parents just worry about going to work, few people accompany and love their children like Chinh,” she said.

On November 20, Bao Oanh participated in a school performance on the occasion of Vietnamese Teachers’ Day, and Ms. Chinh saved some money to buy her children new shoes. “I want her to be pretty when she’s on stage. Every year the homeroom teacher helps her with makeup. I’m a mother, but I’m very ignorant about it. I can only encourage her,” Chinh explained.

It’s been over a month now, Oanh’s father left Hanoi. Chinh also courageously filed for divorce waiting for the court date. She said this is the best way for her to focus on taking care of her children.

From time to time, Oanh whispered to her mother: “I want to learn to sing. Later, when I grow up, I will sing to earn money for my mother.” Loving her children, she quietly shed tears thinking about the future.

In order for teachers and students in remote areas to have better conditions for teaching and learning, the Hope Fund – VnExpress newspaper continues to receive donations in the School Light program. Each reader’s cooperation will contribute to improving educational opportunities for disadvantaged children. Any support please send to the program here.