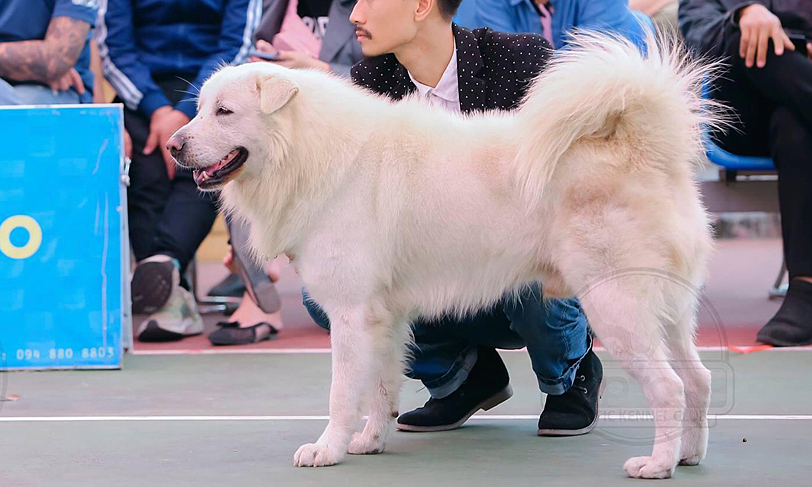 “That day, he ran 5 rounds from slow to fast to test his nerves and dexterity, to coordinate with his master. Despite cheering around, Soi still cooperated with me from start to finish”, Mr. Hoang Quoc Viet, 35 years old, said Wolf’s owner.

The contest took place at the end of October. As soon as he knew that the Bac Ha dog would be participating in this year’s Vietnam indigenous dog breed competition, Viet had determined “to let Soi play his best”. More than 20 days before the competition, he started putting Wolf in the “smelter”. Every night, when it was cool, he led him to the grass yard near his house to run for his toned and flexible body. Wolf’s diet these days not only has meat as usual, but also added beef, cheese, eggs and functional foods such as calcium tablets, minerals … to help it be physically strong. Beautifully coated and ruffled fur.

“To let Soi get used to the atmosphere of the competition and practice his nerves, I often lead him to a crowded place. The siren is loud, he is not distracted, he still runs in the footsteps of the owner”, Viet shared.

The two main factors that determine Wolf’s victory are his body appearance and personality. Wolf’s appearance is almost close to the absolute standards of the organizers and is highly appreciated by players such as 58 cm in height, 28 kg in weight, standard frame, almond shaped eyes, short ears, responsive Breeding standards … During the competition, Wolf always focused and coordinated well with the owner, with outstanding advantages in height, beautiful white ruffled feathers, rhythmic movements, strong standing.

The most characteristic feature of the Bac Ha breed is the thick double coat to adapt to the highland living conditions of Bac Ha and Simacai (Lao Cai). Wolves have white fur, longer at the head, look like a lion’s mane. This is a precious trait, not all Bac Ha dogs have.

“A dog that wants to win a prize at the Dog Show must converge traits that are close to the standard dog breed, and at the same time show good looks with good movement and good coordination with the operator. “, Ms. Le Ha, Deputy Head of the Vietnam Indigenous Dog Development Department (VKA) shared.

Bac Ha dog is considered one of the “four great national dogs” of Vietnam. Since ancient times, the land known as “white plateau” has handed down the story of a herd of fire wolves living on high mountains, or catching cattle of the people. One cold winter, the fire wolves bite and kill the male dogs in the village to gain the right to mate with female dogs, giving birth to a flock of puppies with the appearance of a fire wolf. Villagers spread the ears of Bac Ha dogs originating from there.

Local people also told the story of the French colonial period, the French brought the famous shepherd dogs to challenge the Bac Ha dogs of “Meo King” Hoang A Tuong. As a result, the large western dogs succumbed to the mighty flocks of fire-colored dogs.

“H’Mong dog is short, Phu Quoc is quite active. The more mature Bac Ha, the more beautiful, calm, and friendly, but at night, he is very alert, is a good watchdog”, Mr. Viet said.

Mr. Do Cong, 60 years old, Hoan Kiem said, has raised a lot of western dogs and me, from becgie, rottweiler, Phu Quoc, Mong … but still like the Bac Ha dog best. “This breed is very calm, nervous and very attached to the owner. One day I was busy with the whole day forgetting to go to the toilet, it hissed and did not go indoors”, he shared.

Two years ago, Mr. Cong went to many highland villages to hunt but raised 6 poodles – Bac Ha crossbred dogs, or highland puffed lines – but still could not buy a standard Bac Ha. “I spent 15 to 20 million to buy a puppy, and I know it is not purebred,” the man said. Although he is well aware of the difference between hybrid and native dogs, he does not have the opportunity to approach and buy it.

Being a friend of the Mong people for hundreds of years, but unlike Phu Quoc and Mong dogs with the breed standards from ten years ago, Bac Ha has the official standard version on October 24, 2020. Dogs recognized by experts will be fitted with a chip under the skin, with complete information about genealogy and body characteristics. “This action enhances the breed of Bac Ha dog, thereby contributing to the protection of the standard genetic source”, said Nguyen Minh Khang, Head of VKA’s Indigenous Dog Development Department. Currently, VKA has recognized 3 purebred Vietnamese dog breeds to enroll them in the World Dog Breeds Organization.

However, do not wait until the breed is recognized, enthusiasts of this breed have a sense of protection very early. Mr. Hoang Quoc Viet, owner of Soi, is one of the pioneers in building the movement of raising Bac Ha dogs in Hanoi.

His love for the “white highland” dog breed was cultivated from his childhood. When he was a child, his family lived in Yen Bai city, his grandparents were in Lao Cai. There is never a dog Bac Ha in the house, sometimes it is fire yellow, sometimes quadruple color, black and white. After college, in 2013, he returned to his hometown to select the best individuals to play. Over the years, he made several pairs.

His predestination with Wolf was very accidental. In 2018, after returning from a long business trip, he saw on the Wolf sale association. “At that time I wondered, why such a beautiful dog posted a few days and no one bought?”, He said. Perhaps at that time, the player was fond of the color of fire, so Wolves were ignored. Mr. Viet immediately contacted the seller to pick it up to his home. Since then, Wolf was attached to him like a shadow.

As an artist, every time he stops painting, he spends a lot of time caring and playing with Wolf. He and he are like two friends, go everywhere together. He also brought Wolf to many places during his long trips and business trips. Unlike some other dogs, Wolf was obedient, friendly in a crowded place. Thanks to its good nerves, it doesn’t get car sick. “A dog is too shy or too fierce. Finding a dog that is both beautiful and mentally good as Wolf is very difficult”, Mr. Viet shared.

Every week, Mr. Viet has to travel between his home in Hanoi and his family resort on the top of Da Trang Pass (Hoa Binh). When he saw the owner, Wolf also jumped into the car with him. During a distance of nearly 200 km, it sat still. On the pass, Wolf’s white fur blends with the white of the mountains and clouds, like standing in the middle of cold distant Nordic land.

“Everyone who looked at Wolf thought he was a Western dog. When he said that it was a native of the Mong people, many people said, ‘I didn’t expect our country to have such a beautiful dog breed’,” said Viet proudly.