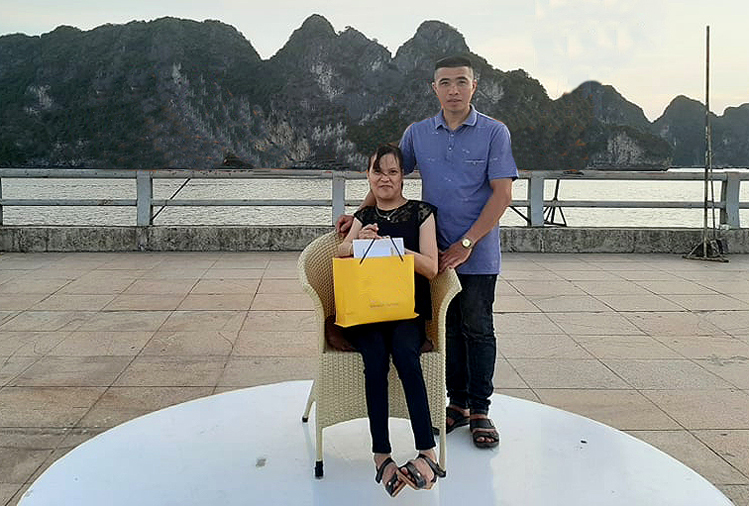 hung YenWhen he learned that Chuyen loved and planned to marry the girl with cerebral palsy as his wife, his parents and the girl’s family strongly objected. But that was 5 years ago.

Trieu Nguyen Chuyen, 33 years old, from Bac Kan, works as a miner in Quang Ninh. He knew Bui Thi Diem, living in Tien Lu district, Hung Yen, through social networks in 2014. The girl suffered from cerebral palsy after a high fever at the age of one, since then her limbs have been constricted, she has to walk on her knees. There must be someone to help out.

Initially, they were two friends, only able to chat with each other after work. Knowing the handicap, Chuyen takes advantage of every day to inquire about his health. That touched her. And he understands this is a good girl by the way she always tries to do everything in the house, from cleaning to cooking…

After two years of conversation, on April 30, 2016, Chuyen expressed his wish to visit you. She hesitated, afraid to see herself, he wouldn’t want to be friends anymore. “No matter what, I will come visit you”, Chuyen answered emphatically and then the next morning took the car back to Hung Yen.

The first time they met, in order to say a sentence, Diem had to put all his effort into pronouncing clearly: “Are you different than I imagined?”. The boy said from the outside looked thinner and smaller than in the photo and noticed that, despite trying to appear strong, Diem did not dare to look directly at him, his gesture clearly showing his low self-esteem.

In Hung Yen for a few days, Chuyen observed how the point moved and did everything in the house. She walks on her knees, every time she cooks, she has to put a few chairs underneath to reach the kitchen.

Seeing her dragging step by step up the stairs, Chuyen wanted to try that feeling, so he tried to kneel down to practice walking and then climb the stairs but fell down. “I understand Diem tried very hard not to be a burden to everyone,” he said. From that moment on, the miner respected his friend more.

Returning to Quang Ninh, the two still talked every day, and the feelings in Chuyen also grew. After a few months, he confessed but Diem refused because he didn’t believe his feelings for him were real. She says he should find an ordinary person who can bring happiness.

A few more times, the guy was still rejected because the other party thought the relationship was not going anywhere. Mr. Chuyen said that in those days, his heart was confused, many times he couldn’t hold back his phone calls and burst into tears. “I’ve never experienced such a feeling of nostalgia. I want to be with Diem, spend my life loving and making up for her,” he said.

To prove his love, when he was free, Chuyen would take the car back to Hung Yen, helping Diem with household chores. The two people come into contact with more and more, the girl begins to believe that this feeling is real.

When Diem asked why he chose to stick with people with disabilities like himself, Chuyen said that his job as a miner faced many dangers and unforeseen accidents. “Life is limited, This life finds someone who really understands and sympathizes with me, that’s enough,” he replied.

Chuyen’s attention made Diem experience many love emotions. After a few months, they considered getting married, moving into the same house. Immediately, they faced opposition from both sides’ families.

The first time Chuyen visited her home, Mrs. Tran Thi Thai, 50 years old, Diem’s ​​mother loved the kind and honest boy, but she never expected that the two would fall in love, even considering marriage. For this mother, the fact that a healthy guy like Chuyen pursues his daughter is illusory and difficult to accept.

Disabled point, can not work, Mrs. Thai only hopes that her children get married in the countryside, parents can easily go back and forth to help. “I used to think that Chuyen’s feelings were joking and pitying,” she said.

His parents strongly objected. In order for the “rebellious” son to forget about getting married, the grandparents hid their household registration, and at the same time declared their children’s face if they did not give up their intentions. “I will marry her. I will be happy and miserable in the future”, Chuyen decided before leaving home.

Unable to convince Mr. Chuyen, the mother called the girl, begging to let her son go. The point that the mother’s actions are right should take the initiative to say goodbye. But the young man refused to give up. Every weekend, he would take a bus from Quang Ninh to Hung Yen, quietly doing everything. Before Chuyen’s persistence, not only Diem but also her parents relented. Not long after, they got back together.

At the end of 2016, a small wedding took place, with only the bride’s family. No betrothal, betel nut, no flowers, the bride and groom’s clothes only rent a single set to wear throughout the ceremony. No one in the groom’s family attended. In order to treat concerns with neighbors, Diem’s ​​mother explained that the wedding would be held for the second time at the groom’s house because of the long distance.

The healthy boy Trieu Bui Trung Duc was born in mid-2017, making the small family happier. After a month, mother and daughter stayed in Hung Yen, father returned to Quang Ninh to work.

In early 2019, Ms. Diem sent her children to her parents to visit her husband. This is the most private time the couple spends together. From the day his wife arrived, the room for rent was full of joy, no longer the loneliness and silence as before.

Every day, before going to work, he goes to the market so that his wife can prepare meals for two people. Before, she only knew simple dishes, now Diem is looking for recipes for more complex dishes, waiting for her husband to return.

At the end of the week, Chuyen took his wife on a motorbike to take him to the sea to enjoy the wind or go for a walk, to meet friends. At first, Dot didn’t like it because he was afraid to look at it. “For me, you are always the most beautiful”, Specializing in encouragement. Every time she put her in the back of the motorbike, the husband always put one arm behind the back to hold her tight, as if holding a baby. Over time, Diem no longer paid attention to the whispers of the people around him.

Mr. Nguyen Duy Thai, Chairman of Trade Union, Khe Cham Coal Company said, when he first heard the story of Chuyen and his wife, he did not believe it. But once he visited his home, he realized that these were his workers. “I was startled, did not expect such a couple in the world. At night, I thought forever why there is such a great love,” said Mr. Thai.

The couple’s love moved Chuyen’s parents. At the end of 2020, the grandparents called their son home, gave them the household registration book, and urged them to register their marriage. “Doesn’t it make sense to let my nephew have his mother’s last name,” they said.

Covid-19 broke out when Diem went home to visit his children on April 30 of this year, causing the couple and their children to ask each other through the phone screen for the past half year. Every day, even if he worked the night shift, Chuyen would text and call his wife to advise his wife to eat, drink, and rest, when he would return home.

In the latest foreword posted on her personal page when receiving her husband’s wishes on October 20, she wrote: “God is very fair, when one door closes, another door opens”.

For this woman, the “new door” of her life is Chuyen, who brings happiness and unconditional love.