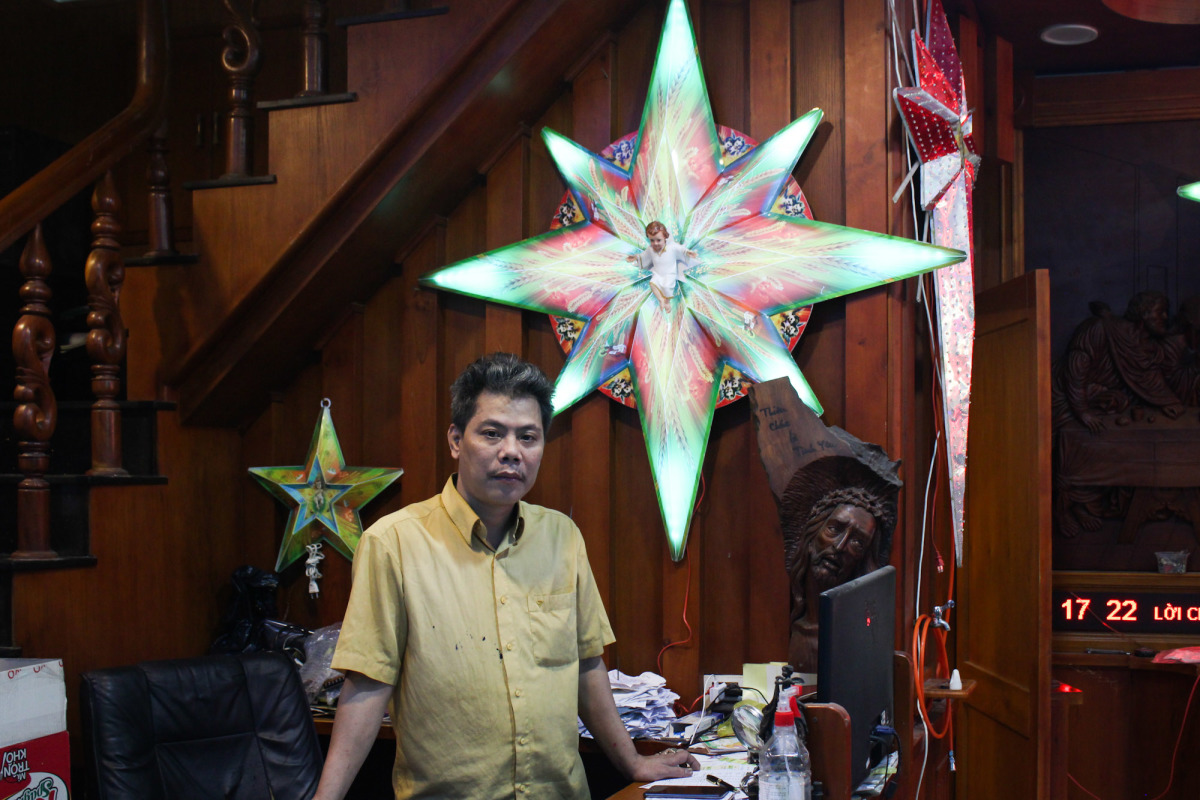 Ho Chi Minh CityLuong Vinh Cuu, 43 years old, is considered the father of the Christmas star product that lights up with LED technology, producing tens of thousands of units each year.

On the afternoon of December 21, when the last Christmas stars left the factory, Mr. Cuu began to clean the house, and with the neighbors erected trusses and hung lights. Christmas atmosphere is bustling throughout alley 41, Nghia Hoa street, Tan Binh district.

In 1997, when he was still a student, Mr. Cuu launched the first Christmas star light with LED technology. After more than 20 years, he has owned two large workshops with 40 employees and has become almost the only address specializing in supplying Christmas decorations to all over Saigon.

As a Catholic, native of Kien Lao parish, Bui Chu diocese, Nam Dinh, since childhood, Cuu often together with his brothers and sisters made star lights for Christmas from bamboo frames, wrapped in glass paper and lit with electric lights.

In 1996, Mr. Cuu had access to many electronic documents and knew about super bright LED technology. Thinking this kind of light could replace incandescent lights, he learned how to program and make flashing lights to put on the Christmas star. “I went to Nhat Tao second-hand market to buy chips and circuits, then design 6-pointed and 8-pointed star lights according to my imagination and use flexible plastic to make lights.” he recalls.

Successfully making a few, he brought them to bookstores to consign. At that time, the money from selling lights each Christmas season was enough for him to cover living expenses for the last few months of the year, and to buy train tickets to his hometown to celebrate Tet.

For the first two years, he couldn’t convince customers to call his product a Christmas star. People assume that the star must be five-pointed, while his products have many different shapes.

“I found out in the Bible that the Christmas star has no shape. It is a symbol of a beam of light so that the three astrologers know the sign of the birthplace of the baby Jesus. So all the shapes. Lighting enemies are all called Christmas stars, not necessarily a pentagram,” said Mr. Cuu.

In 2002, after graduating from school, Mr. Cuu founded a company, hired workers, and established a professional production process. Currently, his workshop produces many types of lamps with many sizes, the smallest is 50 cm priced at 250,000 VND and the largest is a 10 meter high lamp that costs more than 40 million VND. Every product he makes comes with a 2-3 year warranty. During use, if damaged, it can be repaired free of charge.

“Christmas stars are not only a business product, but also a religious product, so I don’t want to use them for a year and then throw them away. Walking in the street, looking at a faded lamp, where the lights are on, I don’t, I very sad,” he explained.

The shape of the Christmas star now and his first products more than 20 years ago are not much different, only the sophistication, quality, electrical show are better. For four years now, he has replaced flashing LED lights, monochromatic light with full color LEDs for softer, more harmonious lighting effects. “Flashing LED causes many people to be blinded. Customers who buy big lights, and live in apartments with full glass windows, so neighbors complain. Some buyers bring them back to exchange. However, this type is still popular with customers. shops in the provinces, or the big churches like it,” he shared.

In 2009, because he did not check the quality of the front lights, but instead installed them in bulk, he found out that thousands of units were faulty at the end. “A led system has 500-700 bulbs, just one bulb doesn’t work, the product is considered faulty and cannot be sold,” said Mr. Cuu.

That year, Mr. Cuu had to sell the land where he bought 70 gold trees to make up for his loss. “I think I’m young, I can start again. That money is the tuition I have to pay for carelessness,” he shared.

In the early evening of December 21, Mr and Mrs. Nguyen Van Ha, 65 years old, in Le Van Sy Street, Tan Binh District, carried Christmas lights one meter high, bought four years ago, to ask Mr. Cuu to repair them. The string of led lights has a few bulbs that don’t light up, Mr. Ha tinkers with it and buys a new lamp to replace it, but it doesn’t work.

“This is the first Christmas star I bought, so it’s very precious. Before, it was difficult, so I usually just hung a few strings of lights, made a cave to welcome Christmas. Seeing the church next to the house hanging lights, I was asked by the priest to come here. At first, I thought this lamp was a foreign product, but I didn’t expect it to be manufactured just a few kilometers from my house,” said Mr. Ha.

Mr. Cuu said, fortunately, the guest had a broken light before Christmas Eve so he could fix it in time. Almost every year, he receives calls from customers on the night of December 24 asking to fix broken lights. At that time, even though the whole family was gathering around the celebration party, he still rushed to serve customers.

“If I don’t come, the guests’ Christmas Eve will change from joy to sadness and their faith in me will turn to disappointment. Sometimes it’s overwhelming but I believe in the mystery that God sent to me, if I really try to do my job and never lose out,” said Mr. Cuu.