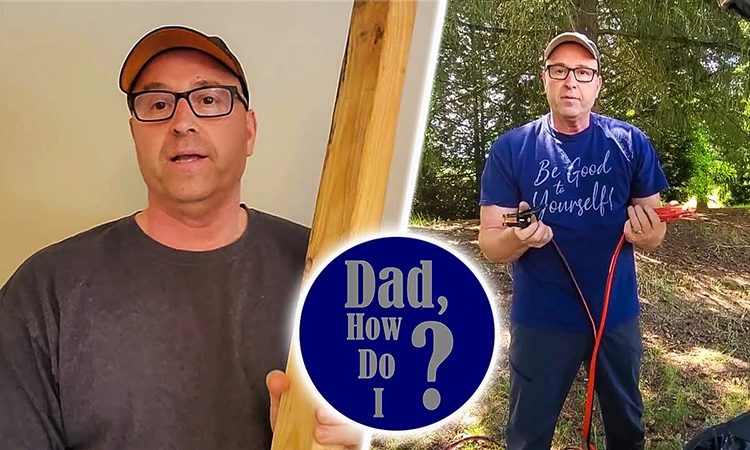 AmericaLess than a year, youtube channel ‘Dad, how do I?’ has more than 3 million subscribers and Rob Kenney is dubbed the “father of fatherless children”.

If only watching the video content on the channel, many people do not understand why “Dad, how do I?” (Dad, how should I be?) So famous. The example in the first video shows a middle-aged man teaching how to tie a tie. Other videos are similar, just showing basic skills such as shaving, fixing wheels, ironing clothes, running a drain … simple and rustic. But these videos were made by Rob Kenney – a 56-year-old man from Chicago city – for fatherless kids.

“A child without a father needs basic skills to survive in this complex world,” this is what Rob learned as a child.

Rob Kenney grew up in a family of 12 siblings, his parents were not happy. His mother was forced to leave her hometown, wandering, making her lose balance, and gradually fell into crisis. When Rob was 10 years old, the mother started getting drunk and refused to care for the children.

Father Rob, who works far away, becomes bored with his family and falls in love with another woman. Every time he got home, he became irritable and ruthless towards his wife and children. The couple’s life became more and more stressful and in the end, they decided to divorce. Father Rob took care of the children. Twelve children have to live alone in a 26-square-meter house, only from time to time their father visits.

Two years later, Father Rob told his children, “I have done my best, now you should take care of yourself or go to the orphanage to live.” Rob, along with 11 siblings, officially abandoned by his father, became unhappy children without the love and guidance of his father. The 23-year-old oldest brother led Rob to live in a nearby neighborhood. Since then, he has lived on the protection of his brother, who is often responsible for sad and moody children. For Rob, this was a pain that was hard to erase for years.

As an adult, Rob’s life encountered many difficulties. The moment his wife was pregnant with the first child, he lost his job, all plans were overturned. In the most difficult moments of his life, Rob sought faith in religion. He learned to face difficulties on his own and forgive others’ mistakes. After a long time without seeing his father, he called to take the initiative to make up. The father over 80 years old is invited by his son to go fishing and gradually opens the knots of the past. Not long after that trip, his father passed away.

Rob’s two children have successful careers and happy lives. Recalling the days without his parents’ teachings, Rob decided to teach years of life skills to unhappy children like himself. This idea was supported by the family but due to the busy work, the plan was postponed indefinitely. Until the 2020 Covid-19 epidemic, Rob had to stay at home in isolation, before Rob registered his YouTube and Facebook accounts with his daughter’s help.

From Rob’s point of view, what he wanted to teach others was not just life skills, but also the transmission of feelings like a true father. In the eyes of most people, children without parents are easily fallen and useless. But Rob has proven the opposite, there will be kids who also want to grow up well and become useful people.

“My goal is to train excellent young people,” Rob summarized why he wanted to make the video. He wants to teach children skills necessary for life, which they cannot learn in school.

In April 2020, Rob released his first video on his personal YouTube channel, showing how to tie a tie. Followed by other life skills. According to Rob, these are all “conundrums” that he once wished to raise his head to ask his father “What should I do?” but received no response.

At first, there weren’t many followers of Rob, but they gave the video enough positive reviews to motivate him to stick with it. Gradually, Rob videos and experiences gained more attention. Several media interviewed and TV station The Jam TV Show invited him to appear to tell his story.

The reason for Rob’s popularity is written in the comment section below the video.

There are countless sad stories similar to Rob’s childhood. Many people lose their parents, their parents divorce and live wandering, or are simply ignored by their fathers. “In a virtual world full of indifference and prejudice, Rob’s channel is like a safe haven, letting people forget the devastation of reality,” commented one viewer.

Rob’s video is really simple, no flamboyant, no elaborate editing, only a middle-aged man teaches people common life skills with a gentle smile. But for many people who have lost affection like Rob childhood, this can be a warmth that they cannot touch.

“He is the father of fatherless children,” many internet users commented when watching Rob’s video. Someone even called him “Dad”.

Rob didn’t expect his channel to get popular so quickly. It was all due to the effect of emotional resonance, he said. “This is far beyond my imagination. I initially thought the channel had only 20 or 30 subscribers.”

“Live well, be kind to everyone”, that’s what the 56-year-old man sends in each of his videos.

Vy Trang (According to people, today)