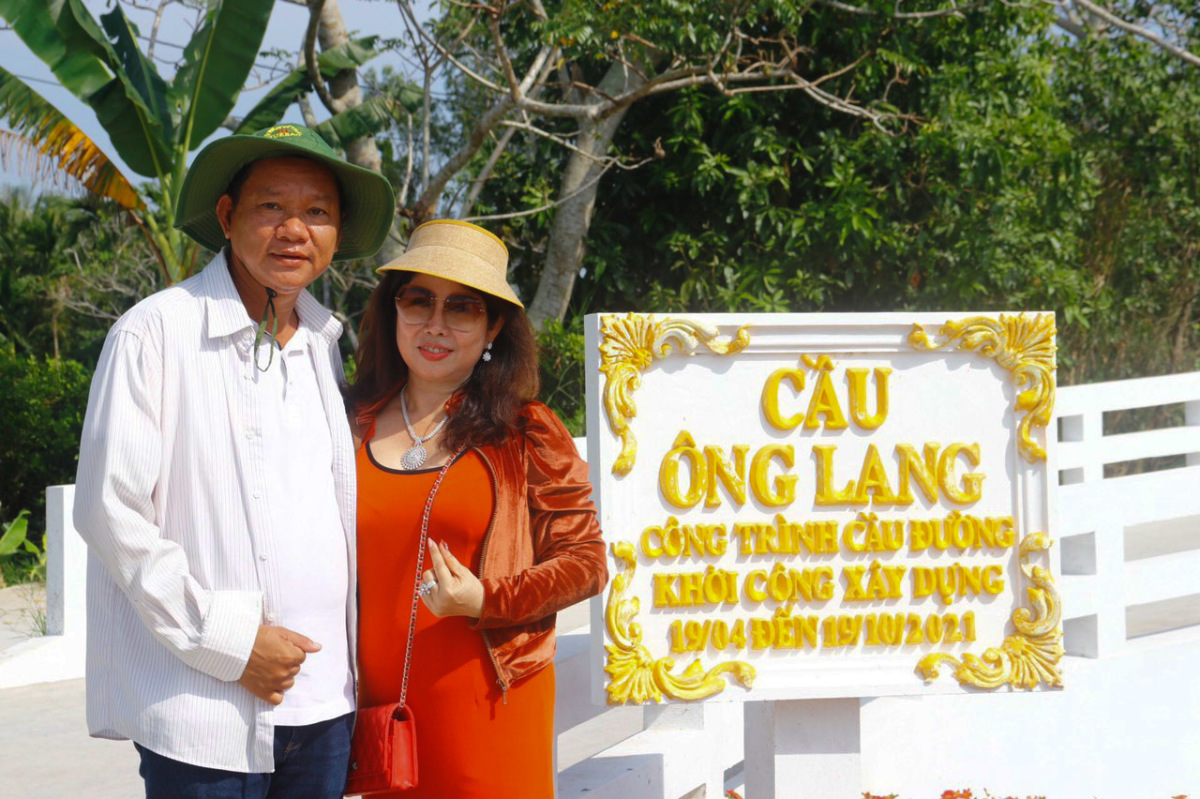 Can ThoAt the end of the year, when he returned to his hometown to celebrate Tet, Mr. Lang stopped his car to visit a concrete road more than 500 m long, with flowers blooming on both sides at ten o’clock.

On the road, dozens of young people are taking pictures with decorative miniatures. Besides, the elderly exercise on pre-installed exercise machines. This ecotourism road in Tan Hoa hamlet, Giai Xuan commune, Phong Dien district was started construction in the middle of last year, with a cost of nearly 3 billion VND, a gift from Mr. Nguyen Ngoc Lang, 54 years old, to her children on the occasion of the Lunar New Year this year.

Mr. Huynh Viet Cuong, chairman of Giai Xuan commune, said that this stretch of road is just a part of the 15 km of concrete road that Mr. Lang has spent more than VND 17 billion on over the past 10 years.

“Last November, Mr. Lang also spent money to build a bridge across the river, shortening the distance by 5 km from the hamlet to the commune center. Locals call this stretch of road ‘ong Lang street’ because thanks to him, the child is born again. The old muddy dirt road became a tourist attraction,” shared the commune chairman.

Mr. Nguyen Ngoc Lang was born into a poor family in Tan Hoa hamlet. He had to drop out of school in grade 4 to help his parents with farming. After more than 20 years in Saigon to build a career, he became the director of a cosmetics factory with more than 100 workers. Many times when he returned to his hometown, he saw that the roads were almost unchanged, still the dirt road along the riverbank, the fields, it was very difficult to travel, he was very concerned.

“Without concrete roads, life is difficult to get better,” Mr. Lang told relatives. Since 2012, the director started to spend money to build a road for Giai Xuan commune. “Each person has a different way to repay the favor to their homeland. Personally, I think the bridge is the most important thing,” he explained.

Thanks to the amount of several hundred million dong extracted from the annual profit of the factory in Binh Tan district (HCMC), each road section in Giai Xuan was gradually concreted. There is a section 4 meters wide, a section only 2 meters depending on the terrain. In 2018, after asking for permission from the locality, he decided to “make a big hit”, spending more than 5 billion VND to build 5 km of road “wide enough for two cars to go”.

“Spending a large amount of money, my wife was a bit hesitant, but she did not stop me, let me decide,” Mr. Lang recalled. His wife, Ms. Le Thi Truyen shared: “At this point, the family is stable, the children are also grown up, so my wife and I want to contribute more to the community.”

There was a time when the plan to build a road for Mr. Lang’s hometown was almost abandoned halfway. In 2019, he suffered from septic shock of the bile duct, was in a coma for 6 days, and the doctor predicted that the chance of survival was only 1%. Fortunately, Mr. Lang regained consciousness. In the days lying on the hospital bed, he thought maybe he should give up the road work. After recovering, he found that he was still healthy and the family business was better, so the director changed his mind. “If you have health, you can still run the company, you have to do it to help the people in your hometown so that you won’t have any regrets later,” he said.

In the middle of last year, Mr. Lang left Saigon to return to his hometown to avoid the epidemic and came up with the idea of ​​​​making an ecotourism road to serve people. On both sides of the road, he planted flowers at ten o’clock, installed hundreds of solar light bulbs. During the day, the flowers bloom colorfully, at night the street lights are bright in an area. In the land next to the road, he grows vegetables, gourds … people come to visit and pick them up as gifts. He also dug a thousand square meter pond, released lotus flowers, bridged the middle of the pond, set a swing for guests to take souvenir photos.

“He is a director, but when he returns to his hometown, he is as sincere as everyone in the hamlet. At noon when I visited, I saw that he was busy working and forgot to eat. After noon, he went in to make a packet of instant noodles,” said the chairman of Cuong commune.

“At first, our people thought that Mr. Lang spent money to build roads and eco-tourism areas to get money, but unexpectedly, all the works here are free,” said Ms. Nguyen Thi Nam, 50 years old, in Tan hamlet. Hoa said.

In the past, Mr. Lang always wondered if his wife would agree on the surface but sad in his heart, now he believes his wife fully supports him. Instead of preparing Tet for her family, this year, Ms. Truyen returned to her hometown from mid-December to assist him in reviewing miniature works to serve visitors.

“Looking at my wife’s happiness, I feel relieved. Looking at my relatives chatting on the road and the bridge I built, I have no regrets in this life. I hear many people saying to each other: ‘What’s so much money for’ But think, if I have a lot of money, I have a lot of work to do for my homeland”, Mr. Lang confided.