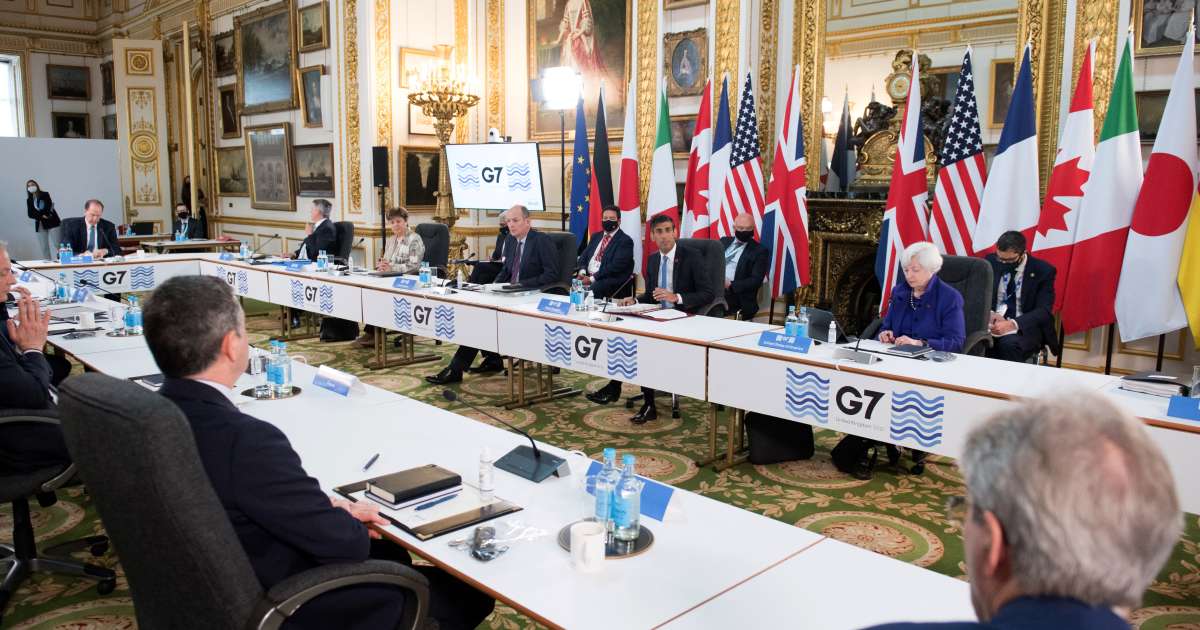 The G7 powers have reached a historic agreement on a harmonized tax for large companies, while committing to the climate, aid to poor countries and post-pandemic recovery.

A global corporate tax rate of “at least 15%”: unprecedented commitment by the G7 Finances

Here is an overview of the main points of the press release published on Saturday at midday after a two-day meeting in London.

Towards a minimum global tax

This was the main issue on which the G7 countries (United Kingdom, France, Italy, Canada, Japan, Germany, United States) were expected.

They have sided with the goal of a minimum corporate tax rate of 15% in each country in which they operate and a fairer distribution of tax revenues.

The objective is to tax multinationals where they make their profits and no longer just where they are registered, often in countries with low tax pressure.

The measure will apply to international companies that achieve at least 10% profit margin. The agreement provides that above this threshold, 20% of the profits made will be taxed in the countries where the group operates.

The major American technology groups are particularly targeted, which are achieving record results and have often taken advantage of the context of the pandemic.

The press release does not say whether countries that already have a tax on digital giants, such as the United Kingdom, will eventually have to abandon it to make room for reform. But UK Finance Minister Rishi Sunak said this was London’s intention.

Despite this historic agreement, the project has not yet come to fruition and the G7 Finances is pushing for an agreement during the G20 Finances which is held in July in Italy.

“It’s a historic moment but it’s not the end of the road”, said Rishi Sunak.

This is the other major issue on the menu of the G7 countries, which should be widely discussed at the summit of heads of state and government at the end of next week in Cornwall (South West England).

The G7 Finance supports the plan to make it compulsory for companies to publish their climate risks.

It is a key tool in the energy transition, which should allow investors to see more clearly when financing large groups.

A broader agreement can be hoped for for the COP26 on climate at the end of the year in Glasgow.

G7 finance ministers are also in favor of adjusting global accounting rules to harmonize the publication of these climate-related risks.

Finally, they welcome the forthcoming establishment of a working group aimed at encouraging companies to publish their impact not only on the climate, but also on nature.

The G7 remains committed to helping the most vulnerable countries recover from the health crisis. It endorses the IMF’s new allocation of special drawing rights of $ 650 billion.

This issue, the first since that decided upon in the aftermath of the 2008 financial crisis, will increase the IMF’s lending capacities. The ministers also welcome the efforts of the World Bank, in particular to improve the access of poor countries to vaccines.

Economic recovery after the health crisis

The final communiqué reiterates the commitment of G7 members to continue helping their economies heal their wounds, as activity resumes and health restrictions are lifted.

Once the recovery is well underway, they intend to ensure that public finances are put back in order, in order to be able to respond to new crises.

According to them, the end of the pandemic can only go through the massive deployment of vaccines and tests on a global scale.

G7 health ministers have already committed on Friday to share doses with developing countries via the international Covax system.