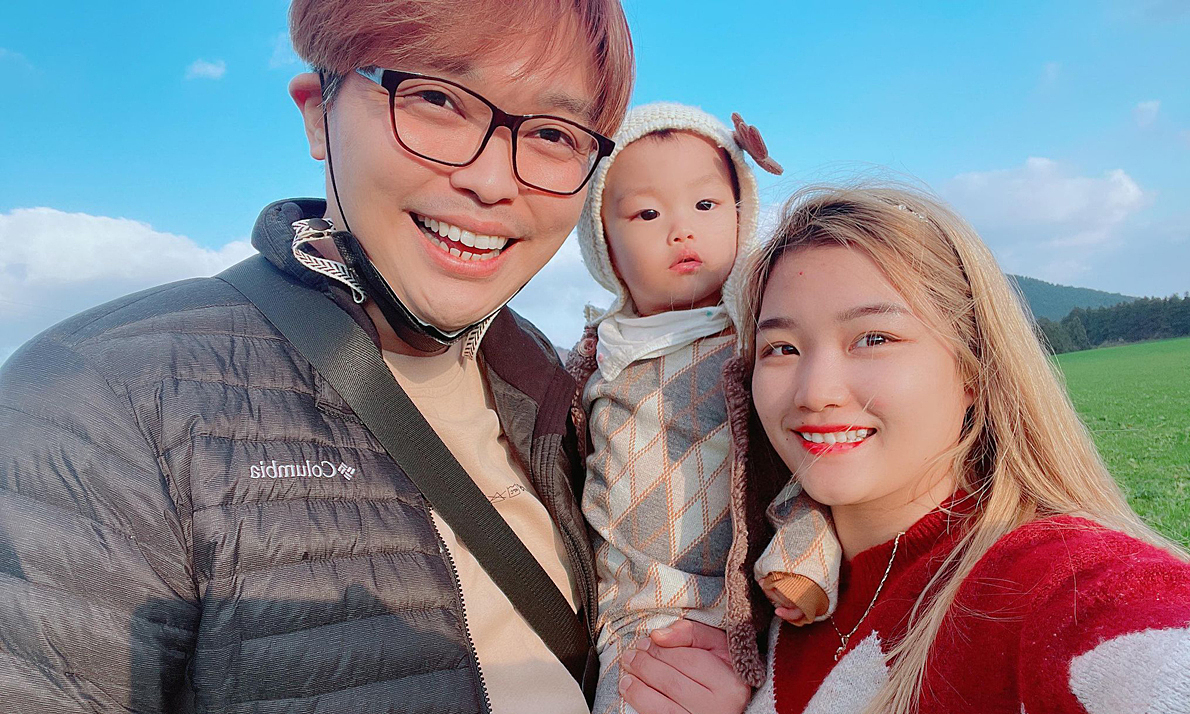 South KoreaFollowing celibacy for 38 years, but when he went to Vietnam to work, Shin Dong Won “hit love by lightning” and married Hoang Linh after two months of love.

Earlier this week, receiving a picture of a house in the countryside that was completed and spacious, preparing to welcome Tet, Hoang Linh (21 years old) carried her child from the 11th floor to the 21st floor of an apartment building in Ansan, Gyeonggi province, showing it to her parents. husband. Grandparents praised the beautiful house and said that after the epidemic was over, they would visit the family again.

This house was built by Linh’s husband, Mr. Shin Dong Won, who sent money to his wife’s parents to build. This groom just asked his wife to send an extra amount for his parents to buy Tet, with the instruction: “No matter how much we stay here, we must leave our parents and children in the countryside like that”.

Hoang Linh’s childhood in Van Yen, Yen Bai was associated with poverty and family debt. Nam Linh was about to go to high school, because she did not have 360,000 VND to pay for the exam, but had to stop studying. “I cried and asked my mother for a loan, but it was difficult to borrow 10,000 VND in my hometown. At that time, when I heard people recommend that I work as a maid in Vinh Phuc, I would have money to pay for school, so I left,” Linh said.

The class president has not been able to greet friends and teachers for nine years in a row. She planned to work for two months in the summer and then return for the exam, but then thinking about her mother and siblings, she decided to drop out of school. That year, Linh brought home 11 million dong, bought a set of tables and chairs for half, and gave the rest to her mother to shop. “Since I went to work, the house has Tet,” she shared.

At the age of 18, Hoang Linh worked as a waiter for a Korean restaurant in Vinh Phuc. Seeing a colleague working as an interpreter receive a salary three times higher than her salary, Linh is full of admiration. Since then, she has learned about Korean culture and the Korean language, the more she learns, the more she likes it. Saving every penny, in April 2019, Linh signed up for a Korean language course with the intention of becoming a translator.

Only a few days after going to school, there was a tall, white Korean guy who took the initiative to talk to Linh, then asked for her phone number. Through the introduction, she knew that he was an expert of an electronics company in Vinh Phuc, who needed to learn Vietnamese quickly to communicate with employees. “Suddenly there was a smooth white ‘oppa’ like in the movie, I was surprised and happy,” she recalled.

In the early days of knowing each other, they communicated in both Korean, Vietnamese and English, sometimes even using translation software. Language differences, but also because of that many times they laugh because of misunderstandings. Hoang Linh still goes to Korean class, especially Dong Won dropped out because he found a friend to teach him the language.

One day he asked about his family, Linh opened his heart to share. Her father often beat her mother, so since childhood, there were only four mother and daughter who relied on each other. At one point, Linh cut her long hair and sold it to earn money to buy pens. Because of poverty, she had to drop out of school to work.

After listening, Dong Won burst into tears. He himself is an only child, surrounded by his parents since childhood. As an electronic engineer, Dong Won is passionate about work, so at 38 years old, he still doesn’t think about getting married. The first time he saw Linh, he didn’t understand why he would talk to her, even though there were many other people at the foreign language center. Gradually talking, he was attracted to her cuteness and beauty and proposed to him after only two weeks. After dating for about a month, he said he wanted to go back to her hometown to meet her parents.

The boyfriend’s suggestion made the girl flinch. Thinking about the shack, far away, thinking about her uneducated parents…, she was afraid of being laughed at. Dong Won persuaded forever, Linh had to lead him back.

Returning to Vinh Phuc after the visit, Dong Won did not criticize his girlfriend’s family but also proposed marriage. Linh said she wanted to wait a few more years to go to work to take care of her family and send her two children to university. “I don’t want them to miss school like me,” she said.

“If you’re worried about money, or anything else, I can handle it for you,” Dong Won replied firmly.

The boy’s sincere words made Linh feel like Cinderella had met the prince. Dong Won’s attention and care makes her feel like these are “unprecedented treatment in 18 years of life”. “For many years, only the four of us, mother and daughter, depended on each other to live. Now, suddenly, with him as a support, I feel extremely happy,” she shared.

The young couple registered their marriage in July, just two months after falling in love. In 2020, Hoang Linh went to Korea to meet her husband’s parents. Contrary to the thought of the bride, his parents love the daughter more than the son. Fearing that her daughter-in-law would be tired, she would not let her touch anything. Her father-in-law gave her pocket money and asked all sorts of questions about her family, many of which were spoken in vague Vietnamese. He had studied Vietnamese in advance to prepare for this meeting.

One evening the whole family gathered around a tray of rice, and her father-in-law said: “This is my house! My parents do not have a daughter, so they will treat you as their own daughter”. Linh cried all night. Since then, wherever he went, his father-in-law would introduce “This is my daughter”.

It turns out that over the years, his parents and relatives have been constantly trying to match up and urging Dong Won to get married, but he always refuses to see each other. Once he declared: “I will not get married”. The grandparents believed that they would not have a daughter-in-law, grandson, until their son reported that he had found love in Vietnam after only three months of working here.

Immediately after the visit, the grandparents went to Vietnam to organize a wedding for their two children. At the end of last autumn, Dong Won brought his wife and children back to Korea.

The new life of Yen Bai girl in the land of kimchi is extremely comfortable when her parents are comfortable and take care of her mother and child, when her husband goes to work. Hoang Linh intends that her child will grow up a little more and continue to pursue the studies that she missed 5 years ago.