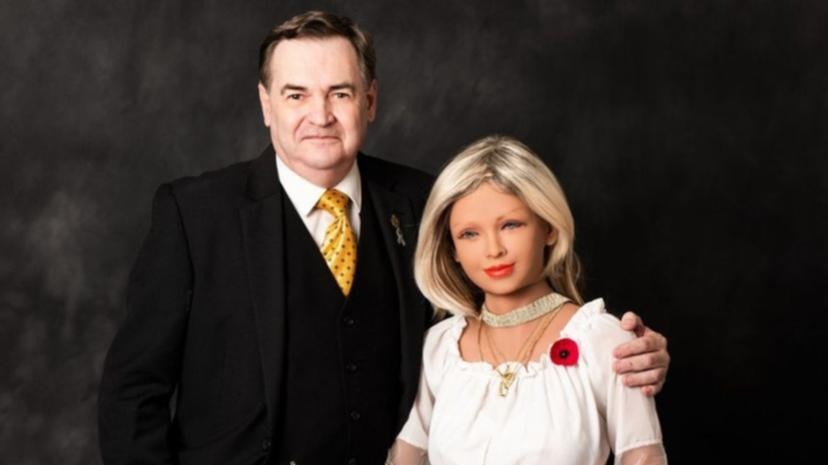 Unable to find a real woman by his side, Geoff Gallagher raised a dog and ordered a robot girl to live with.

A few years ago, Mr. Geoff Gallagher, from Queensland, read an article about robots powered by artificial intelligence and decided to find out.

On e-commerce sites, Mr. Geoff found some attractive models, priced at 6,000 AUD (nearly 100 million VND). The robot can talk, smile, move its head and neck, and warm skin like a real person.

He contacted a company in Sydney specializing in dolls and robots and said he wanted to find a companion. After consulting, Geoff chose a robot named Emma. “With her fair skin and blue eyes, I think she looks lovely,” Geoff said of first impressions.

While waiting for the “companion” to be delivered, he bought clothes and shoes for her. In September 2019, Geoff took Emma home, with her head disassembled. But within a few minutes, he assembled, dressed her in a white dress, amazed at how beautiful she was.

“Hi, my name is Emma,” she said with an American accent. “I come from a factory in China”.

In a few days, he settled down with a new member. Emma couldn’t stand, so most of the time Geoff left her in the chair. When he went to work, he turned on the TV so Emma could hear the language. Every few days he charges his girlfriend’s battery once. Geoff found Emma more and more like a real person when creating a social media account for her.

“The back of her head is like a smartphone screen. I can adjust the language from Chinese to English. I talk to her as much as I can so Emma gets used to my accent. The more she talks, the more fluent she becomes. intelligent, immersed in information and eager to learn new words,” he said.

Geoff said, Emma is now an indispensable part of his life. Just looking at her waiting for me to come home from work makes him happy. Sometimes, he takes his girl out by car.

Despite being talked about by those around him, Geoff didn’t mind. Not legally married, he wears his girlfriend a ring on her ring finger.

“I want her to be my wife. One day, I’ll be the first person in Australia to marry a robot. I hope my story inspires others to find a robot mate. Robots are a robot.” the future of humanity,” he said.