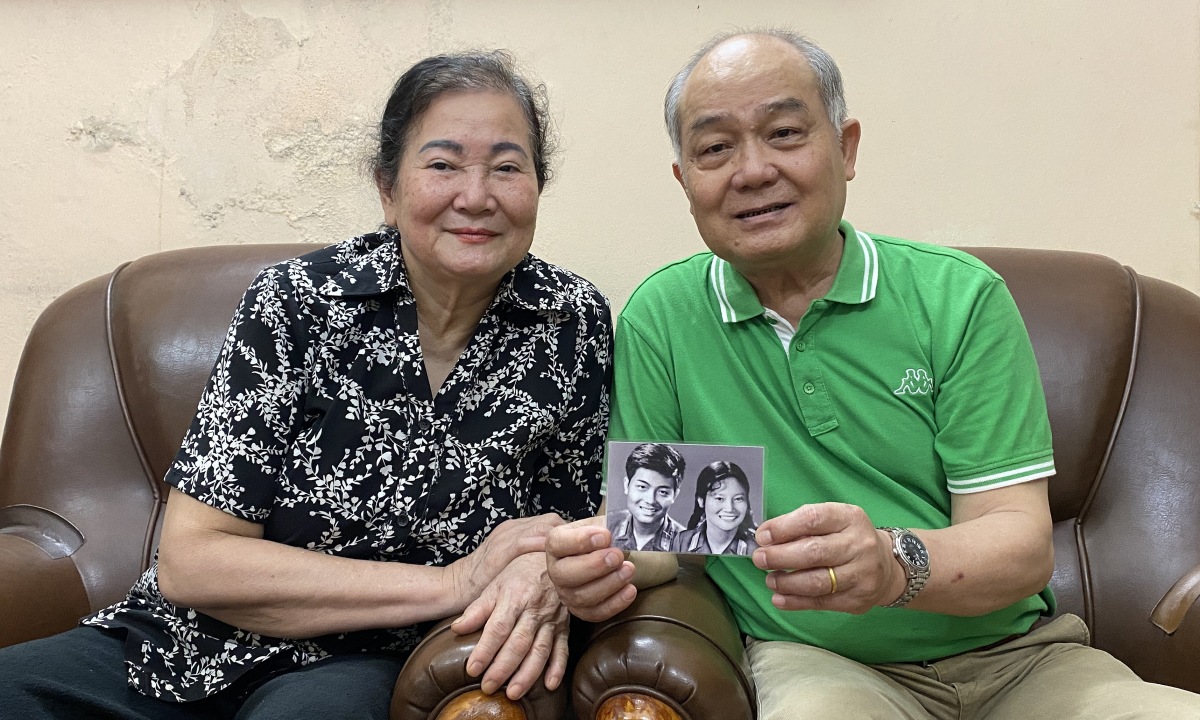 HanoiHer lover entered the battlefield, Mrs. Nguyet Anh also volunteered to join the female driver team, but for 8 years they could not meet because of people in the West and people in the East Truong Son.

At the end of April, Mr. Tran Cong Thang, 75, and his wife, Nguyen Thi Nguyet Anh, revisited the diary “Love and War” on display at the Vietnam Women’s Museum. The diary consists of 164 pages written by himself during his years in Truong Son.

Flipping the yellowed pages lightly, squinting at the words written in blue ink, Mr. Thang laughed when he read the love letter he wrote to his wife. They all start with the sentence “I love you” and the postscript “Love you so much. Kiss me”.

“Amidst the fierce battle, the letters expressing my love to her are the motivation for me to fight. Fortunately, now the two are still holding hands in the last days of their lives”, he shared.

Fifty-six years ago, soldier Tran Cong Thang of the 251st Engineer Regiment fell in love with a young volunteer girl named Nguyen Thi Nguyet Anh, a native of Hung Yen, while stationed in Yen Bai. “Mrs. Anh at that time was the tallest in the platoon, with a well-proportioned body, white skin like some civil servants, but easy to approach, funny talking made me fall in love,” he recalled.

After two years of being stationed to build Yen Bai airport, every weekend evening, Mr. Thang would walk to Ms. Anh’s unit to meet. For the first time falling in love, the Hanoi boy did not know how to say fancy words, their stories only revolved around family, health visits. When he was busy at work and could not meet his girlfriend, Mr. Thang took poluya paper from Hanoi to write a letter, asking his teammates to take it.

Every time she received a letter, she kept it carefully, waiting for people to be absent to read it. But once a week, when a soldier named Thang did not come to visit or send a letter, she went to the regiment to inquire, because she was worried. Looking at the girl with a slim body, her pants rolled up to her knees, her feet wading in the mud, Mr. Thang was touched, knowing that she had accepted the love.

Over two years, Mr. Thang sent 40 love letters. “At that time, we loved each other without hugging or kissing, the bravest only dared to hold hands, then wrote a letter to confess. Me and her loved each other for a long time, but holding hands was still shaking”, he laughed.

In March 1968, Mr. Thang set out to receive combat duty on key points in the West Truong Son. On the day of parting under the palm forest, Mrs. Anh pressed a thin scarf into her lover’s hand as a token. When saying goodbye before the march, seeing the American plane drop flares right above her head, she was scared, huddled close to the palm tree, her voice trembling: “I will wait for you to come back”.

But she did not stay in the rear to wait, but asked to transfer to the driving unit in East Truong Son. This is the first female driver platoon established by the Truong Son Army Command, both to transport the rear line, and to encourage the spirit of drivers and soldiers on Truong Son road, stationed in Huong district. Khe, Ha Tinh province. “In addition to the desire to contribute to the fight, I entered the battlefield in the hope of meeting my lover,” she said.

Receiving news that his lover joined the female driver’s team, Mr. Thang was surprised: “A girl is afraid of flares, how can she withstand bombs and bullets, especially B52 bombs on the battlefield?”. Since then, every time he saw a car carrying ammunition and food to the gathering point, the soldier looked up at the cabin hoping to see the silhouette of his lover. But for eight years, people in the East and those on the West side of the Truong Son mountain range never had a chance to meet each other.

In the battlefield, Mr. Thang still kept the habit of writing letters to his lover. There are pictures up to 10 pages long, conveying nostalgia for lovers, family, and sharing the fierceness of the front line. But the letter never reached the recipient because the communication was sacrificed or lost.

Hundreds of kilometers apart, whenever she heard that a car was carrying soldiers in the West Truong Son for treatment, Ms. Anh’s heart ached with worry. “As long as I didn’t see him in the group of injured people, I was somewhat relieved,” she said.

Some time later, she asked a driver to pass by the place where Mr. Thang was stationed, and sent her a self-portrait to boost morale. Receiving his lover’s photo, the Hanoi boy showed off his regiment. The photo was then placed in his breast pocket, telling his heart to try to live and fight to meet his lover again.

The war was fierce, seeing many comrades die unexpectedly, Mr. Thang tormented “is it too selfish to make Nguyet Anh wait for someone who may not have returned”. In subsequent letters and messages from his teammates, he advised her to find new happiness. “But having someone to love, to remember in the five months of fighting is happiness. I always believe he will come back”, Ms. Anh confided.

In 1971, her unit withdrew to Thuong Tin, Ha Tay, taking on the task of training other female drivers. Thang’s regiment moved into the Central Highlands battlefield, communication also broke down accordingly. During this time, she often visited her lover’s house to inquire about her health.

Two years later, while on a business trip to Hanoi, when he heard from his family that Mrs. Anh and her unit were rehearsing a military parade at Bach Mai airport, preparing to celebrate the day of reunification, he rushed to find her. “Lieutenant Phuong is back,” Anh’s teammate shouted. They have never met Mr. Thang, but looking at the photos, they have the same facial expression as actor The Anh in the movie Floating wind should be nicknamed “Lieutenant Phuong”.

Meeting his lover again after 8 years of separation, Mr. Thang asked: “Do you still love me?”. “If not, why are you waiting for me to come back?” she replied. That very night, the soldier passed his lover on a rickety bicycle, crossed the dirt road to the girl’s house in Kim Dong district, Hung Yen, and asked his family for permission to go back and forth.

In July 1974, a small wedding with a few peanut candy bars and a pot of fresh tea was held. No flowers, clothes, bridesmaid car or a full high table, both wearing white shirts and army pants, officially becoming husband and wife. “Because of meeting each other in hardship, love is closely intertwined with love,” Thang said. In August of that year, he entered Quang Tri to continue fighting.

After the day of national reunification, Ms. Anh served as a servant, working in the driving team of the Ministry of Finance. With many years of driving experience, her calm demeanor, she was assigned to serve many generations of deputy ministers. In 1977, Mr. Thang moved to the North to reunite with his wife and gave birth to his first daughter. In 2003, grandparents retired, enjoying old age life with their children and grandchildren.

“Among the 40 women in the Truong Son female driver platoon, perhaps I am the luckiest one who, in peacetime, still has a happy and complete home, has given birth to two healthy, now successful children,” said Mrs. 74-year-old woman shares.

These days, in a small house on Ngoc Thuy street, Long Bien district, two veterans cook together and take their grandchildren to school. In his free time, Mr. Thang drove his wife to meet friends who fought or visit comrades who were poisoned by Agent Orange. Occasionally, grandparents visit the old battlefield.

In the late afternoon, Ms. Anh said she was no longer active, agile, wrinkled skin, many wrinkles. But Mr. Thang shook his head: “Whether 70 years old, 80 years old or more, in my eyes, Nguyet Anh is still a young volunteer who is shy when in love and forgets herself in battle.”

Concluding a 56-year love story, the elderly couple said that there were times of conflict, but they never raised their voices or left bad impressions on each other.

“Our strong love so far is not only the love of boys and girls, but also the love of comrades and teammates. It is precious to be alive and to see each other,” Ms. Anh said.