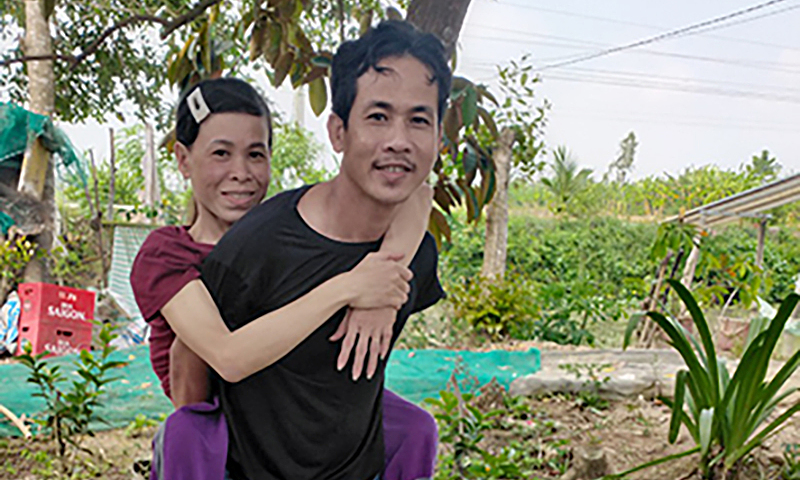 Can ThoSeven years ago, bricklayer Ngo Van Loc from An Giang first went to Saigon to meet his girlfriend with the offer “let me carry you around”.

Up to now, in their small house at Quy Lan 6 hamlet, Thanh Quoi commune, Vinh Thanh district, Can Tho city, there have been more children’s laughter. Nguyen Thi Nhi, the old girlfriend, called her marriage “a gift from God”.

Mr. Loc and Ms. Nhi met each other through social networks in 2015, when both had just turned 30. The girl was paralyzed since the age of 4, her legs atrophied, her back hunched to one side, had to move by hand. . Even so, Nhi still does everything well from washing, cooking, sewing clothes, even diving into the river to find crabs and snails. At the age of 25, she left Can Tho to go to Saigon to help her sister sell groceries and repair clothes at home.

Knowing that Nhi has a disability, every day, Loc takes advantage of her health to ask about her health. After knowing each other for a few months, one day Loc said he would go to Saigon to visit his girlfriend. Without waiting for her to agree, the very next day, he crossed 80 km by motorbike and appeared in front of her house. Although trying to be strong, Nhi did not dare to look directly at the handsome man in front of her, the gesture clearly showed her inferiority.

The first day at Nhi’s house, Loc quietly observed how she moved and worked. Seeing that Nhi even has to walk with two hands, but she is proficient in everything, he understands that this is a good girl by always trying to do everything, not relying on anyone. “She can also sew very nice shirts and trousers,” Mr. Loc said.

From admiration, feelings in Loc grew. He decided not to go back to his hometown but stay in Saigon to find a job to be closer to Nhi. Once, he confessed his love but was rejected outright by her. Nhi could not forget the advice of her aunt: “He is handsome, healthy, having feelings for him is just pity”. She also did not believe, this love is real.

Once the family organized a beach trip to Vung Tau, Nhi asked Loc to go with her. When everyone went down to the sea, seeing the guy just hanging around her, she urged him to go out, but Loc shook his head: “I’m going with you, so just stay with me. If you go, I’ll go”, Loc said.

Receiving a nod, Loc carried Nhi down to the beach, not afraid of the curious eyes of those around him. That night, he posted a photo of both of them on his personal page, with the caption “My love”. Nhi began to believe in this guy’s feelings.

Loc’s sincerity gradually erased the inferiority in Nhi, she accepted the word of love. Knowing his girlfriend’s guilt, rarely going out, he often carried her to the house of friends and relatives to play. Before Nhi was very fond of Nguyen Hue walking street, every month Loc brought her lover to carry her for a few kilometers.

When love is ripe, they plan to get married, but Loc’s mother strongly opposes it. The day her son brought his girlfriend home, she said nothing, quietly left. Without the consent of the family, the two remained quietly together. Once, Loc had a work accident and broke his leg. During the days at the inn, Nhi devotedly took care of her lover, from meals and sleep to bathing and cleaning at the bed. After a month, Loc recovered, that’s when his mother was convinced. She turned on the green light for the wedding of two children with a clever reminder: “Be careful and treat the Nhi well”.

Their wedding was held on April 30, 2016 at the bride’s house, while the groom’s family only announced it due to the long distance. That day, it was only 7 am, but the bride’s yard was packed with guests because everyone was curious to see who Nhi’s groom was.

After the wedding, Loc helped his mother-in-law sell the restaurant while Nhi was still fixing clothes. Half a year later, another joy came to them when they heard that Nhi was pregnant. During her pregnancy, she was afraid that she would only weigh 25 kg, and it would be difficult to keep her baby, and that the baby would be defective like her mother. Each time, Loc encourages: “No matter what, it’s my child, I will raise it”. In the last months, her body was heavy in one place, many nights Nhi had trouble breathing, Loc took her wife in her arms to let her sleep.

Baby Ngo Huu Minh was born, weighing 2.3 kg, healthy and healthy in the happiness of both sides of the family. The income from the restaurant is enough for them to live happily and raise their children.

But then Covid-19 hit, the shop had to close. No work, the couple led each other to Can Tho to live with grandparents. At the new place, Loc worked as a housekeeper but had little work, while Nhi stayed at home to hunt for crabs and snails, earn a few dong to raise her children. Not having enough money to pay for her life, for a few months now, she borrowed a box speaker from her parents, invited her husband to go to street singing and sell lottery tickets throughout Vinh Thanh district.

Every day, the couple leaves the house at 4 pm and finishes work when it is late at night. Many days they earn 150,000 VND, but many days only a few dozen. Unable to send their children at the weekend, they put the 4-year-old boy on a three-wheeled tram and roamed everywhere together.

At the beginning of selling lottery tickets, the couple sang hoarsely for many days but only collected a few tens of thousands. Once in a pub to invite guests, Loc was kicked out, even having to listen to heavy disparaging words. On the way home, the wife sneaked a glance at her husband and saw that he was also turning away, wiping his eyes with his hand. Then on heavy rainy days, the road was slippery, causing both of them to lose their balance, slip and fall on the road, smearing all their clothes.

“Even so, my wife and I are together now wherever we go, because you are my legs, I am your fulcrum,” Nhi said.

Life is hard, but with free time, Loc invites his wife and children to go out and meet friends. Many times he asked to carry her like a new love, although Nhi objected: “Like a child. When you’re old, people laugh for you”. Showing a sulky expression, Loc said seriously: “I carry my wife, but I carry someone else, but there’s a lot going on.”

For this man, to love someone is to give his whole heart to that person, even though they are not as healthy as you.