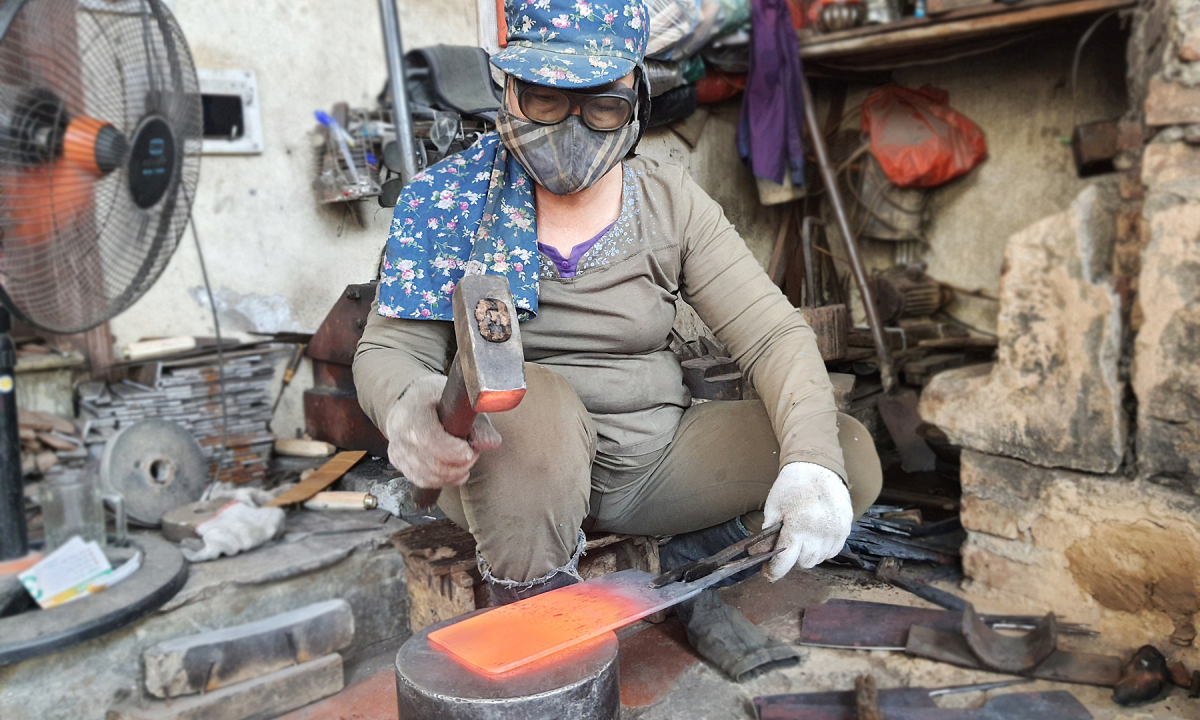 HanoiAt 7 am on the first day of summer, Mrs. Do Thi Tuyen, 57 years old, chose the oldest outfit, put on boots, wore thick gloves, covered her body with a cloth hat, and set fire to the 40-year-old forge.

The furnace lit up, hot steam spread throughout the workshop of more than 20 m2 of Ms. Tuyen’s family, in Da Sy, Ha Dong. The three fans turned on the largest capacity did not help cool down how much.

“People who are about to go to work will choose the best clothes, and I wear the dirtiest clothes. Winter or summer, I have to close the gate,” said Ms. Tuyen, holding a hammer and pounding the red iron. fire.

Da Sy is one of the oldest and most famous blacksmith villages in the Northern Delta. The villagers said that blacksmithing was formed from the late 16th century to the early 17th century, taught by two great-grandparents Nguyen Thuan and Nguyen Thuat from Thanh Hoa.

Born in a craft village, from the age of 14, Ms. Tuyen had to go to the kiln to help her parents forge knives and sell them to earn money for school. Seeing that blacksmithing was both hard and dirty, at the end of 9th grade, Ms. Tuyen quit school, asked to share meals in the hospital, a friend asked her to go to Hoa Binh to find a job. Having each daughter, her parents absolutely do not want her to leave home.

“There’s nothing wrong with staying at home, but you have to go far,” the father encouraged. Since then, the young girl has been attached to blacksmithing, learning from her father how to forge Thai knives and areca knives and bring them to the market to sell. At first, holding a hammer was not sure, Ms. Tuyen pounded wildly, cutting the piece of iron did not form the desired shape… All day holding the hammer, many days her arms were tired, unable to lift a bowl of rice. Both hands were blistered, painful to the point of sleeplessness.

At the age of 18, Ms. Tuyen and a boy from the same village named Dinh Cong Tam, working in blacksmithing, fell in love. “He was my brother’s friend, often coming home to help with heavy work when my brother was in the army. Seeing me as a daughter but mastering blacksmithing, it was always nice to fall in love”, Ms. Tuyen recalled.

Sometimes, the guy comes to touch (the chisel) for the girl to hammer the iron. Love grows. They returned to the same house when Ms. Tuyen turned 19 years old.

The house with thatched roofs and walls mixed with straw mud had only a valuable blacksmithing suit. Ms. Tuyen learned her husband to make chopping knives and pork knives. The couple made friends with hammers and anvils, raised two adult children, and built a two-story house overlooking the Nhue River. “Eating life in life with the smithy, so I fell in love with it. Not being able to hear the hammer, the anvil, I remember and crave again,” she said.

In 2006, Mr. Tam changed his job, leaving his wife alone as the owner of the furnace. The son followed his father’s profession for a while and then switched to another job. “In Da Sy, there are more than 1,000 households doing blacksmithing, of which 13 people are awarded the title of artisan. Ms. Tuyen is the only female artisan still in the profession”, said Mr. Hoang Van Hung, Vice Chairman of Da Sy Craft Village Association, The head of the Hanoi Artisan Association, said.

Each smithy here has one male and one female. The husband is the main character, the secondary wife poses the knife. Only Ms. Tuyen’s smithy, both main and auxiliary workers, are female. The technical requirements such as cutting iron, sharpening the blade, which only men do, she is proficient in.

Ms. Dang Thi Khanh, 40 years old, an assistant worker at Ms. Tuyen’s kiln, has 20 years of working with the traditional profession in her husband’s hometown. “I just do it, but I don’t understand knives like you do. At a glance, Ms. Tuyen can identify the size of this knife, how many cups thick, what mistakes she makes”, Ms. Khanh said.

Every day, from early morning to late evening, Ms. Tuyen perfects about 20 knives. More than 20 types of knives and scissors from the forge of Ms. Tuyen’s children have entered the kitchens of hundreds of families around the world. Many foreign guests who love the experience also come to her smithy for instructions on making knives to take home.

Blacksmiths work hardest on hot summer days. “We just drink water all day,” said the 40-year veteran. Her ears are always covered with cotton to prevent the chirping from the machine, the hammering all day. Although masks and hats cover the body, but when removed, the nose and hands are still smeared as if they were dipped in mud. “In the winter, if it drops to 8 degrees, you still have to turn on the fan to cover the coal dust that hits you,” Ms. Tuyen held out her black hand and said.

Her long, thick black hair was rarely let loose. The voice is near the street, but she doesn’t wear makeup because her job always has to be covered. “When I opened it, fire shot at my body, lost my pants, punctured my shirt,” she said.

Years ago, when she did not have a full hood, Tuyen’s neck area was covered with scars from fire burns. Even the gloved hands were still white speckled, traces of the times the fire had shot into the flesh.

In 2020, while forging iron, the female artist had an accident in her leg and was hospitalized for two months. “Sit down, my mother is restless. When she’s healthy, she rushes to the workshop,” said Ms. Vu Thi Tam, Ms. Tuyen’s daughter-in-law.

Coming to retirement age, Ms. Tuyen still has no intention of retiring. She found both self-control and income in this arduous job.

“Every profession has its difficult and easy. Instead of looking at the hardships, think about the joy that the job brings to start a new day with it,” she contemplation. 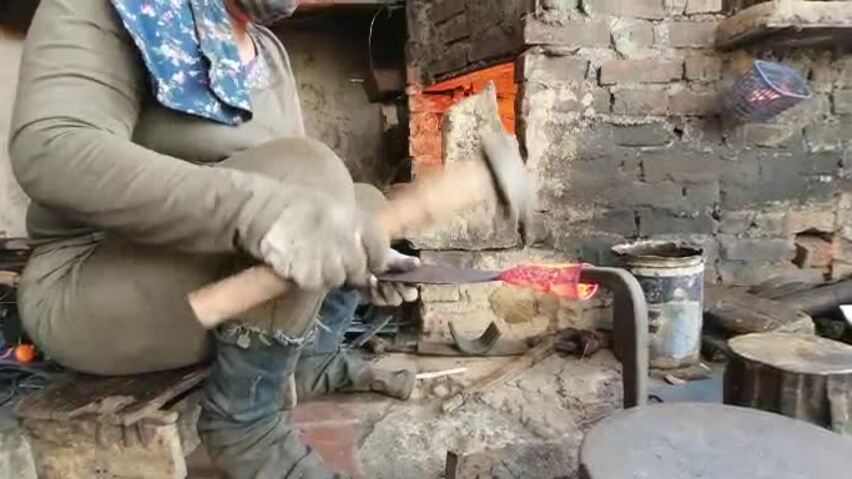 The woman who is a blacksmith