(Sports news, martial arts news) Female boxer Ritu Phogat made a strong impression when she carried Jenelyn Olsim on her shoulder and threw it on the ring, thereby winning to win a ticket to the ONE Atomweight Grand Prix final.

The highlight of the martial arts event ONE: Nextgen taking place on the evening of October 29, held in Singapore, were the two semi-finals of the women’s Atomweight weight class. In the first semi-final match, the famous Indian female boxer Ritu Phogat faced the Filipino boxer, Jenelyn Olsim.

Phogat .’s stage of carrying an opponent to the floor

Notably, Phogat has an impressive record with 6 victories after 7 fights, including 3 knockouts. The only loss of “Indian Tiger” was against Vietnamese-born boxer Bi Nguyen in May this year. Interestingly, after winning Phogat, Bi Nguyen lost to Jenelyn Olsim at the end of August.

Notably, the Filipino female boxer was only a “stunt” at this event for the Japanese boxer Itsuki Hirata who could not be present in Singapore because of the influence of Covid-19. However, with superior Muay Thai skills, having won the East Asian Games, won a silver medal at the SEA Games and trained at the prestigious Lakay team, Olsim is expected to make a surprise. However, with his rich experience, Phogat did not allow Olsim to perform his special skill. After realizing the danger of the opponent’s standing attacks early in the match, Phogat immediately approached, using continuous wrestling attacks to torment Olsim on the floor. Pressed, Olsim was so flustered that he unleashed illegal kicks and kicked Phogat’s face and neck with his feet while in a lying position, prompting the referee to warn him.

At the beginning of the second half, Phogat made a strong impression when he carried Olsim over his shoulder and threw it on the floor. The Indian female boxer continued to completely master the match in the somewhat hopeless resistance of the Filipino boxer. At the end of the match, all 3 referees agreed to award the victory with consensus points to Ritu Phogat. 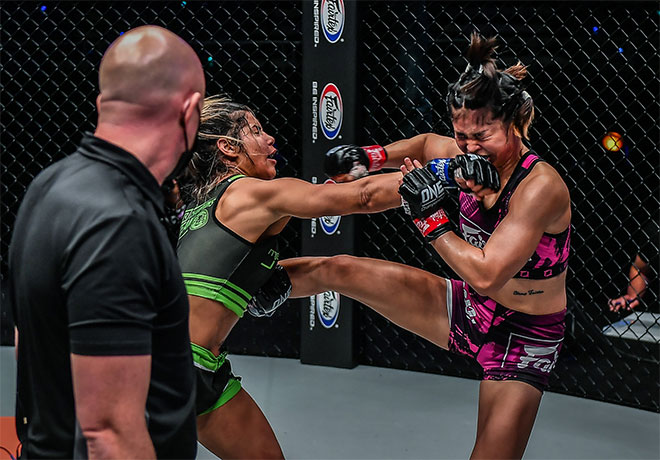 In the other semi-final, the famous Thai woman who held two world championship belts in Kick-boxing and Muay Thai – Stamp Fairtex competed against Julie Mezabarba, a 23-year-old Brazilian female boxer who is winning all the time. 7 matches from 2018 to present.

Mezabarba surprised Fairtex a little in the first half with good footwork and some counter-attacks from the opponent’s kicks. However, Fairtex still proved to be better with outstanding Muay Thai skills. Midway through the second half, Mezabarba caught Fairtex’s leg and wrestled him to the floor. This strategy of hers turned out to be wrong when Fairtex not only effectively countered, but also pressed Mezabarba’s body to unleash powerful punches and elbows. Very lucky for the Brazilian female boxer when she successfully defended.

Having the advantage after the first 2 innings, Fairtex played very carefully, making the last half less attractive. Although there was no eye-catching match, the Thai female boxer also completed the goal when she won the points to enter the final. 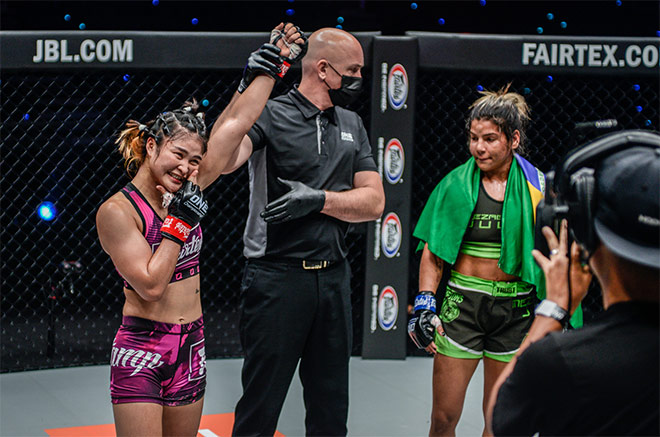 Thus, the final is a confrontation between two fighters of opposite schools when Ritu Phogat is a master of wrestling, and Stamp Fairtex has superior standing skills. This match will take place in early December. The winner will hold the provisional ONE Atomweight Grand Prix belt and have the opportunity to challenge defending champion Angela Lee. (Sports news, martial arts news) The 85 kg athlete is the leading important figure contributing to the creation of the legendary film that brings…