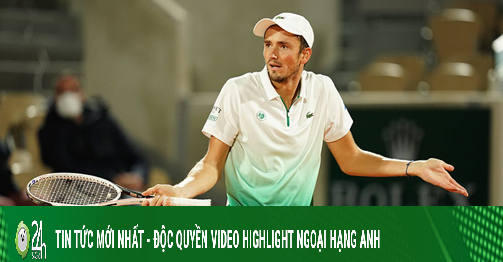 (Sports news) Russian tennis player Daniil Medvedev has been criticized by his coach for not paying too much attention to the Roland Garros event.

Coach Gilles Cervara has just confirmed that Daniil Medvedev needs to stop joking about his poor performance at Roland Garros and start improving his clay court performance. Medvedev has taken the world’s No. 2 spot this year thanks to his promotion after reaching two Grand Slam finals and winning the ATP Finals in London last year.

However, with all these remarkable achievements, Medvedev still surprised him when he could not win a match at Roland Garros in his entire career. This is what makes coach Cervara unhappy, especially when the pupil often shows no problems with this. The Russian star will have a chance to break this bad statistic next June, where it is likely that he will be the No. 3 seed player at Roland Garros.

Playing the first match on clay after nearly 2 years, Naomi Osaka’s No. 2 seed excellently defeated fellow player Misaki Doi after 2 sets with the scores 7-5, 6-2 in the first round. tennis Mutua Madrid Open. The defending US Open and Australian Open champions withdrew from the clay event last year due to a tendon injury and have not played on the field since losing to Katerina Siniakova in Round 3 of Roland Garros 2019.

Austrian tennis star Dominic Thiem is actively training to prepare for the Roland Garros clay tournament. The world’s No. 4 player has not played since being shocked by rising star Lloyd Harris in the opening game of Dubai Duty Free.

Thiem is a clay expert but has unexpectedly withdrew from the Monte Carlo Masters and the Serbian Open in Belgrade to best focus on the Roland Garros event. “I practiced very hard. I’m in my best shape. Of course I have lost a bit of my feeling of not playing in the past time. However, I will soon regain my balance to enter Roland. Garros, “Thiem said.

F1 world champion Lewis Hamilton has joined 11 other racers to form a wave of social boycott in the next 3 days. The boycott is aimed at combating discrimination on the social media platforms. Previously, English football teams, players and authorities agreed to boycott the social network for 3 days from April 30.