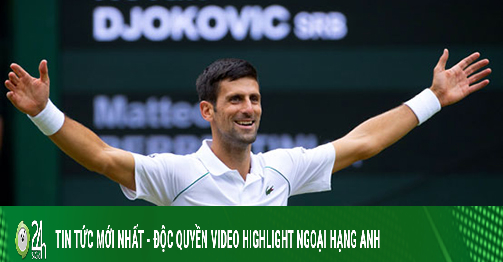 (Sports News) Tennis player Novak Djokovic is full of confidence in winning the Olympic gold medal, when all factors are backing Nole towards this title.

No. 1 tennis player in the world, Novak Djokovic recently confidently affirmed his opportunity to win the Olympic gold medal in Tokyo this year. “I am preparing thoroughly with confidence and fitness. It is a great privilege and honor for me to represent Serbia. I have won the Davis Cup and ATP Cup, now I want to. completed a title circle with an Olympic gold medal for the Serbian team,” Djokovic shared.

“When it comes to pressure and emotions, the Olympics have always been very special compared to other tournaments. I’ve felt it in the flesh throughout my career. So I want to focus on winning it. gold medal. Nothing can stop me from reaching this title, “said the Serbian star.

Federer left open the possibility of competing at the US Open

Former world No. 1 Roger Federer is leaving open the possibility of competing at this year’s US Open. This is bad news for fans of the Swiss “Express Train”. The star who is about to turn 40 has shown signs of a recurrence of a knee injury and if he cannot recover in time, it will be difficult for Federer to ensure his fitness to attend the prestigious tournament in the US.

Scottish tennis player Andy Murray recently affirmed that the Tokyo Olympics is the most important Olympics in his career. Murray is the defending champion in men’s singles and he will work hard to defend his title at this year’s Olympics. If he wins gold, Murray will become the tennis men’s singles champion three times in a row.

Hamilton was criticized for his past statement

F1 world champion, Lewis Hamilton is receiving great criticism from the public when he is “digged” for a famous saying in the past: “You are not allowed to finish first if you destroy the opponent’s track.” . The Mercedes driver is having a difficult time when he is accused of causing Max Verstappen to crash at the race in his hometown of Silverstone.

“To the best of my knowledge, I don’t think I have to apologize for anything. People are criticizing it as an outsider,” Hamilton explained about his behaviour. (Sports news, Olympic news) Legendary Michael Phelps has retired, but at the 2021 Olympics, the US swimming team has a character…

Shaolin boxer vs MMA master: Put your life into the match

The hottest sport on the morning of September 24: Medvedev revealed the secret to becoming the king of the hard court

Federer speaks out about Djokovic after the US Open, the race is getting more and more interesting

Best smartwatch with SpO2 sensor, will easily fit in the budget

Habits that make you tired

Should I Give NEET If I Don’t Wanna Do Either MBBS Or BDS?

Live Text feature is the best in Apple iOS 15, here’s how it works

“Stillwater”, the culture shock of a meeting in Marseille

Chinese parents can rest assured that their children can play games