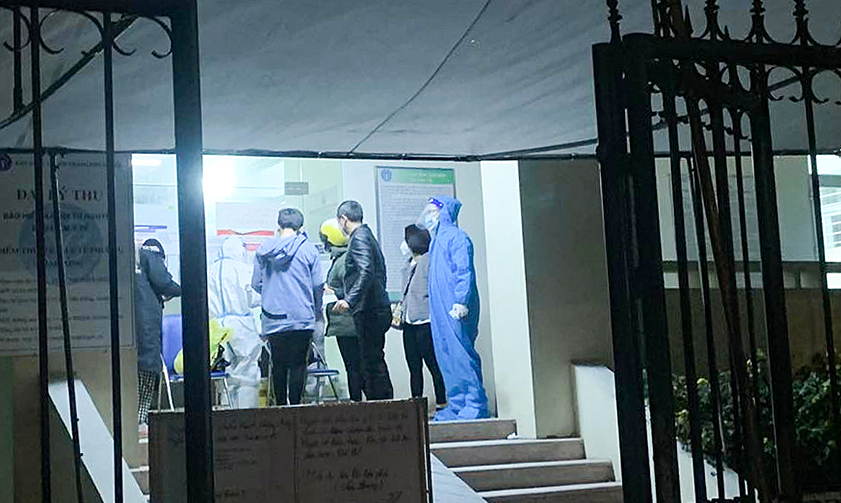 HanoiUnable to contact the ward medical center, three days ago, Ngoc Lan carried a 7-month-old pregnant belly to declare herself, but was asked to return to wait for instructions.

On the afternoon of February 21, Ngoc Lan, 27 years old, residing in Quan Hoa ward, Cau Giay district had symptoms of fever and mild cough after leaving work. Suspected to have Covid-19, she tested herself quickly, the result was up to two lines. “I was a little scared at first when I found out I was positive because I hadn’t been vaccinated,” Lan said.

She asked for the number of the ward medical station, but the desk was always busy, the mobile number was answered, but Lan was only instructed to declare electronically and wait for the phone consultation. But nearly three hours passed without a call, she impatiently tried calling the hotline number and realized that the subscriber had turned off.

“I didn’t apply for medicine or go to medical isolation, just wanted to be guided on how to treat F0 who is pregnant at home, but the more I waited, the more hopeless it became,” Lan sighed. At 19:00 on the same day, she wore tight protective gear, wore a mask, and ventured out to the ward to declare for fear of affecting the fetus for a long time.

But even when declaring directly, Lan still had to “follow the correct process”, after making a medical declaration, was asked to go home to wait for instructions. Since then, she still has not received phone support.

> Handbook of F0 care at home

In the same situation, on February 17, Hien Thuc, 24 years old, in My Dinh 2 ward, Nam Tu Liem district tried to contact the medical station when she and her roommate were both F0 but failed. Thuc made dozens of phone calls every day, but the other end of the line didn’t pick up.

“I determined to self-treat at home but still want to report it to the ward because according to current regulations F0 who fails to declare can be fined from 10 million dong to 20 million dong. But if I can’t contact, will I break the law?” Thuc wondered. In addition, reporting to the local government will be granted a certificate of F0 or recovered, helping the patient to receive sickness benefits from the agency, social insurance or be provided with a patient code for the hospital to receive. treatment in severe cases.

“Six days have passed and I still can’t contact the ward’s health care provider, maybe I’m about to recover,” said Hien Thuc. In the past few days, the food and medicine she has ordered online thanks to the shipper, because her friends and colleagues are all F0.

The female office worker also expressed frustration that she is also F0, but each place has different treatment. “My friend in Dich Vong Hau ward, after contacting the medical station, every day is texted to inquire and support. And my ward can’t reach the phone number,” she said.

Mr. Nguyen Anh Tuan, Head of Health Department of Nam Tu Liem District, explained that Hien Thuc’s case of “six days without contact” was due to the limited number of medical staff, while there were many F0. To date, the district has recorded 745 cases of Covid-19. “There will be dozens of F0 calls at the same time, line congestion is inevitable,” Mr. Tuan said. On February 22, Ms. Tran Thi Nhi Ha, Director of the Hanoi Department of Health, admitted that it was difficult for people to access health services at commune and ward level. The reason is the pressure on the large grassroots medical staff, there are thousands of F0 wards while the medical staff has only 8-10 people, so it is difficult to avoid “misalignment” in supporting people.

To overcome this problem, Nam Tu Liem district has implemented a model of F0 care groups in each residential group. These groups are responsible for contacting the ward health station to assist when detecting F0. “Instead of trying to call the medical station, the F0s should connect to the residential groups,” added Mr. Nguyen Anh Tuan.

“But being able to contact the ward’s health care provider is no better, even more disappointing,” said Minh Hieu, 26, from Mai Dong ward, Hoang Mai district. On the morning of February 23, he took a quick test and found that he was infected with Covid-19 so he called the medical station to report the news. Hieu was surprised when he received the request to directly go to the ward to test again to confirm. “In the past, I just told myself that F0 would have medical staff come to spray disinfectant and take special care, but now they have to go to the ward for confirmation testing. It’s too absurd,” Hieu said.

According to him, the fact that F0 is not isolated but has to go out and go to medical facilities by themselves poses many risks of infection, when a week ago, Hanoi recorded a spike in the number of cases. According to the Ministry of Health, in seven days (as of February 20), the capital increased by 10,986 infections, more than three times the same period in January. On February 23 alone, the city recorded more than 7,400 new infections, bringing the total number of cases in the fourth outbreak to 218,000.

Assoc. Prof. Dr. Nguyen Huy Nga, former Director of the Department of Preventive Medicine, Ministry of Health, said that asking F0 to have quick test results to go to the ward medical station for re-testing “is an exaggeration and is unnecessary. “.

“Forcing infected people to move themselves to medical facilities in an unsafe state is against the rules and poses a high risk of infection in the community,” Mr. Nga said. According to medical experts, medical facilities should have methods of guiding treatment via remote software to reduce the risk of infection, in accordance with the guidance of the Ministry of Health.

Accepted for taking a quick self-test video at home, but Hang Nga, 28 years old, Dich Vong Hau ward, Cau Giay district was still refused to accept because “the camera angle is not standard”.

“I explained that because I was alone, the phone was fixed, while taking nasal fluid for testing, I accidentally covered my face with my hand. But the medical staff still said the video was invalid, forced to return. But Covid test -19 is not like it’s pulled out to poke fun,” the 28-year-old girl, positive on February 20, said.

According to Nga, even if the video is unsatisfactory, she deserves to receive advice and treatment instructions at home, instead of not replying to messages. She is learning how to self-treat F0 at home. “Now that I don’t save myself, there will be no one left, so I have to swim by myself,” Nga said.

Doctor Hoang Thanh Tuan, who used to participate in anti-epidemic in Ho Chi Minh City, is running an online military medical support group to take care of F0 treatment at home, said that F0 in Hanoi is mostly mild and evolving. Just like the common cold, there is no need to be too eager to buy medicine or hoard medicine, use floating drugs.

Mr. Tuan advises, when the medical facility cannot be contacted due to overload, F0s need to calm and soberly choose information channels to help. Can prepare thermometers, blood pressure monitors, antipyretics, pain relievers, diarrhea, … but should not store oxygen generators and oxygen tanks. “When breathing is difficult, oxygen support is needed, which means the disease is moderate or higher, must be treated in the hospital, not treated at home anymore,” said Dr. Tuan.

To this day, Ngoc Lan is still self-isolating at her motel room and waiting for a phone call from the medical center instead of seeking treatment herself. “They told me to just go home and wait for someone to call for help. But I don’t know how long or when,” she sighed.