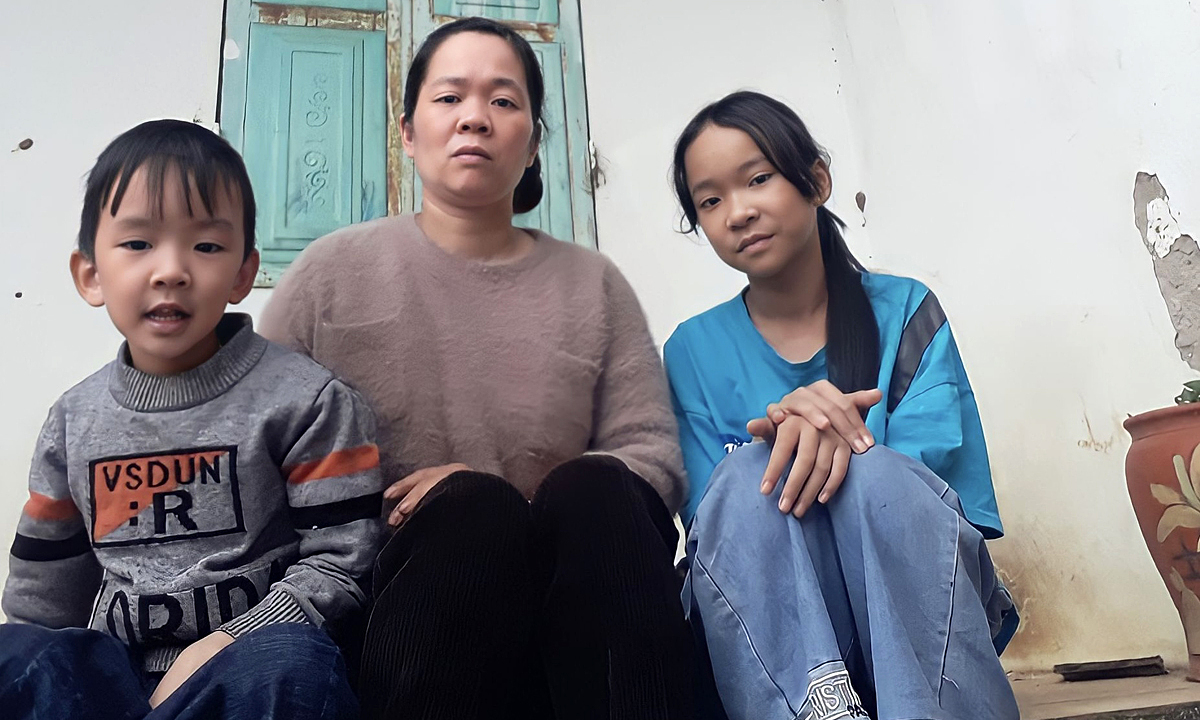 Son LaSeven years of treatment for the first child, the property was sold out, but the cancer was getting worse, someone advised Bich to stop to take care of the next two children.

Until now, Ms. Le Thi Bich (43 years old) in Vuon Dao sub-area, Moc Chau town still vividly remembers the fateful day, the beginning of a series of extreme days for the whole family. That day, the homeroom teacher of the first child Nguyen Minh Duc reported that the boy had been slow to react recently and was not studying as well as before. Along with signs of abdominal pain in the past few days, she took her son to the town hospital to check, and discovered “there is a mass in the abdomen”.

The mother immediately took her child to Viet Duc Hospital in Hanoi. During a month of doing all kinds of tests, finally received the results of a malignant liver tumor.

“The doctor concluded that my son’s illness was that I fainted on the spot. The disease that I thought was only seen in adults, is now seen in a new-born child,” Ms. Bich said.

Since then, Minh Duc had to stop studying for two years to get treatment. In the past seven years, my disease has recurred 5 times, almost every year I have to be hospitalized. For a poor mother, the pain she still struggles with because of a serious illness is multiplied many times over when she has to endure the inner struggle between her sick child and two lonely children at home without care.

In October 2018, she was forced to wean her youngest child, Chi, who was just a year old, to take her eldest son to Hanoi for treatment. In the middle of the night, Nguyen Van Tiep and her husband called down to report that their youngest child had bronchitis, couldn’t breathe, and had to go to the emergency room.

Bich frantically relied on doctors and patients’ family members to take care of Duc, to return to her hometown. In the same situation as taking care of a sick child, the mothers and grandmothers in the hospital collected 2 million dong to lend her money to travel. Before leaving, she advised Duc: “I’ll stay at the hospital for a few days and let my mother come back to see how I’m doing, then come down right away.” The boy understands, just encourage his mother to go fast.

At 3 am, Bich returned to the town hospital. Cu Chi lay down on his uncle’s shoulder, breathing oxygen in his mouth. Running to hug her child in her arms, a mother’s heart is full of hundreds of knots. “I was so shocked, I just silently lamented why my fate was so miserable. I had to stay in the hospital alone, I didn’t know what the disease was like,” she recalled.

At that time, Tiep was forced to work to earn any money or that money to take care of his two children. Cu Chi cried and clung to her mother and did not leave, so Bich did not have the heart to ask her relatives to look after her.

“But then when I hugged Chi, I felt even more pity and pity for Duc. My son was only 8 years old, I don’t know if he vomited after receiving chemotherapy, if he could eat anything. I was even more afraid of him being hurt because he was so sick but had no relatives. next to me,” the mother confided. After a week, Chi was discharged from the hospital. Bich went all the way down to Hanoi to take care of Duc.

With her second daughter, she sometimes finds it awkward. In the early years, his mother took him to the hospital, his father went to work, Thu struggled from neighbors to relatives. After a few meals a month and a half, when the mother comes back, the baby is cared for a little. Later, when her mother gave birth to Chi, Thu even when she was only 6 years old, she knew how to take care of her brother when her parents were not at home.

Resourceful, always the best in class, but sometimes Thu is also a refugee. There was a time when he asked his mother to buy fish for him to eat, but was refused because his mother only had money to buy meat because it was German food. The Thu sulked: “Parents favor you all day”. Bich had to explain: “Now I’m healthy, I can eat anything. But I only have meat to eat a little more rice.” Only then did the girl understand.

Tiep, her husband has been suffering from liver failure and kidney failure since 2014, spending 4 million VND per month on medicine. But since Duc got sick, he also gave up on treatment.

Poverty and disease make the couple fall into poverty. Because of overthinking, there was a period when Bich suffered from depression. For several months in a row, she kept remembering, forgetting, walking on the street or saying miscellaneous things in her mind: “It’s okay. It’s okay.”

Relatives and neighbors encouraged her to try hard because she fell ill, who would take care of her children. Tiep also said: “Mother has to be strong. But if she’s weak like that, I’ll let her go to the camp”.

When she recovered, it was his turn to become mentally ill. Around October 2021, many times Tiep supported his head, planted a banana tree in the ground, or wandered around in the middle of the night, crying and calling his son’s name. Bich had to call someone to tie her husband up and send him to the hospital for treatment.

On that occasion, because his father was seriously ill, Duc had to stop treatment midway. Since then, many times the hospital called for the follow-up visit, the family could not manage to let the child go.

“The boy has a disease of the rich, but the family is poor, where can I get money to treat it. Every once in a while, I have to certify that their family borrow money for treatment,” said Mr. Tran The Viet. , 60 years old, head of Vuon Dao sub-zone, Moc Chau farm town, shared.

Up to now, in the borrowed house at the foot of the mountain, isolated from the neighbors, both Duc and his two younger brothers, Thu and Cu Chi, both know that their parents have no money, only 5 bills of debt. Its creditors are some neighbors around.

Bich said, the neighbors are very good. At first, when everyone knew that Duc was sick, everyone was hurt. There was a doctor who volunteered to lend him 100 million dong, saying it was to replace his liver so that Germany could get better. Unexpectedly, my illness turned back and forth, getting worse day by day. Some neighbors lend money, thinking that they can save people and get their money back soon, but increasingly find that their money “doesn’t come back”.

“In recent years, they have been collecting debt, but my family knows how to pay. Many people advise that it is enough to treat Duc for so many years, to stop saving to pay the debt and also take care of two children. later,” said Bich.

Half a month ago, Duc complained of pain. Ms. Bich wanted to take her child away, but the force was unwilling. One day the boy was in unbearable pain. “In the pain I cried ‘Mom, save me. Mom, I want to live,'” she said.

She took her child to a hospital near her home, and was asked to transfer. But she didn’t have the money to go, so she begged the doctor to give her pain relief. Can’t help it, the medical staff told each other to support 5 million VND for Germany to go to Hanoi for emergency. Down one day, Tiep called again and told his wife to try to take care of 10 million VND to send it down. This time, Bich had to borrow money from the owner of her vegetable barn or to hire a porter, promising to work as a hired laborer to pay the debt gradually.

Liver cancer in children is rare, with an incidence of about 1% of all childhood cancers. Out of about a million children under 15 years of age with cancer, only 1.5 cases of liver cancer. This disease is sensitive to chemotherapy drugs, so combined treatment with tumor resection and chemotherapy gives good results. About 80% of cases live for 5 years after treatment. Ms. Bich said that Minh Duc was detected early, but perhaps because he was not treated and cared for, he often relapsed.

These days, Minh Duc is in so much pain that he can’t remember his YouTube channel. In it, the 13-year-old boy shoots videos around his life with two children – where there are tea hills, green corn fields, peach and plum seasons…

“I dream that my channel will earn money for my parents to relieve suffering and make me healthy again,” Minh Duc said.

With the goal of igniting the faith of children with cancer, the Hope Foundation cooperates with Mr. Sun to launch the Sun of Hope program. One more community’s cooperation is another ray of light sent to the future generations of the country. Readers can view program information here.