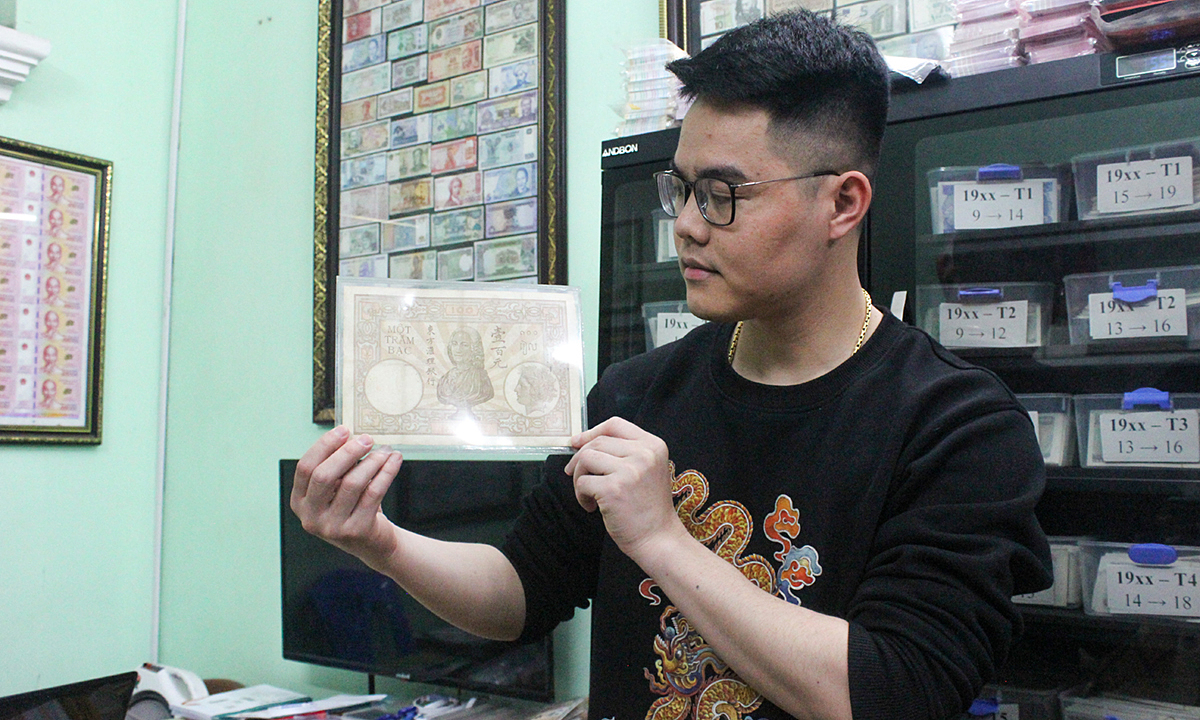 HanoiNearly 12 years of collecting ancient coins, Hung has more than a thousand types of banknotes and coins, in which there are nearly enough samples of Vietnamese coins through the periods.

Every year, close to Tet, Hung takes time to check the antique money trays with beautiful series, carefully stored in six moisture-proof cabinets. “Many people think they are worthless, but to me they are a fortune,” said Phung Van Hung, 32, of Hai Ba Trung district.

For Hung, an antique banknote that is considered perfect must be extremely rare, beautifully designed, with fresh colors, and with a beautiful serial number. The more he collects, the more he wants to, he is willing to travel around the country, spending tens of millions of dong to own an antique banknote.

Before coming to ancient coins, Hung had an interest in collecting postage stamps since he was in 5th grade. Most of the nearly 5,000 stamps in storage so far were purchased with breakfast money. After a while, he couldn’t find more unique models, Hung temporarily stopped collecting.

In 2010, the second year student of Electric Power University attended the opening ceremony of Hanoi Museum and first admired a set of ancient coins. Being fond of nostalgic things, and clearly seeing historical stories associated with the development of each period on each banknote, Hung was determined to find out and spent 150,000 VND to buy 20 commemorative coins.

Hung said, in those years, social networks were not very developed. If you want to hunt for ancient money, you have to go to classifieds sites to post buying and selling articles. Then he went to antique shops on Hang Bo street, Hoan Kiem district to search. After playing for a long time, he knows the source of goods and connects people with the same passion, thereby easily exchanging and enriching his collection.

“No matter how big my liver is, I don’t dare tell my parents who are collecting antiques. The only way to pursue my passion is to work part-time,” he said. Hung applies the method of gradually filtering the collection by selling the old coins with bad serial numbers in his possession to recover capital and buying other bills in the style of “buy 10 keep a unique note”.

Up to now, Phung Van Hung has had a diverse, rare and well-known collection of ancient coins in the world of Vietnamese antique coin collectors with 1,000 different types from banknotes to coins. Particularly, paper money is divided into different historical periods. He has some extremely rare bills, for example the 50 dong bill – one of the only bills in Vietnam with a smiling Uncle Ho or the 2 cent note which is the smallest banknote; The 5 dong note is the only vertical banknote or the 100-set banknote with the largest size in Vietnam.

“Many people say I’m crazy when I spend money on useless papers. But it’s my passion, so I feel it’s worth it,” Hung said.

To him, money is not only a banknote but also contains a historical and cultural story associated with each period of the nation. Like the 100-dong banknote issued in 1949 with the image on the back of a soldier wearing a gun raising a hand to signal to the farmer. The 500 dong banknote issued in 1949 on the back shows the Song Lo victory, the 50 dong for the National Guard, 5 for the South…

“All of them bring a sense of national pride and make me enamored, looking forward to finding other bills,” he said excitedly.

In addition to collecting ancient Vietnamese coins, Hung also owns a collection of world coins, or bills to serve the buying needs of many people such as coins with the same birthday, quarter coins, and beautiful series coins. A few years ago, he once exchanged a 100 USD bill with a serial number of eight 8s for an acquaintance, for a Honda SH car worth more than 100 million VND. Previously, Hung spent 50 million dong to buy a note from a family in Nghe An.

In March 2021, Phung Van Hung was recognized by the Vietnam Record Organization as “The owner of a collection of old and modern coins with the most beautiful serial numbers and serial numbers by date of birth in Vietnam”.

In the near future, Hung cherishes the intention of building a private museum displaying ancient coins, for people with common interests to admire and learn.

“For now, I hope to find many rare and precious bills, to satisfy my passion, to enrich the collection. At the same time, make more introductory clips about the notes that used to circulate in Vietnam on social networks. society for many people to know,” he confided.