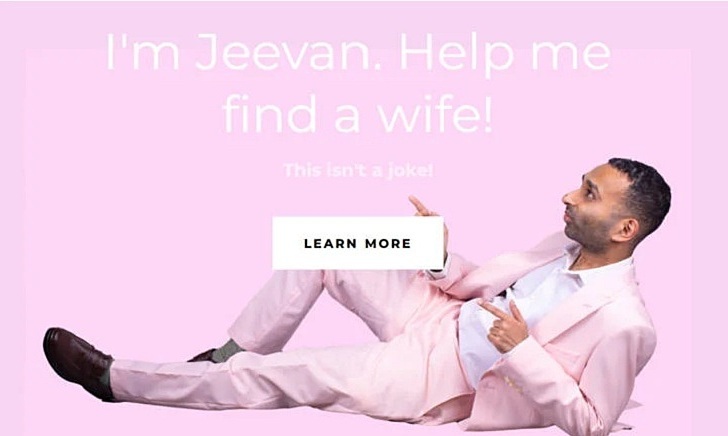 BrotherJeevan Bhachu, 31 years old, wants to increase his chances of finding a wife, so he put up a banner in the London Underground, hoping to be known by many people.

In the first ad, Jeevan appears in a pink suit, pointing at the words “This is the best Indian guy you should marry”. On the second sign, the more specific message “I’m Jeevan. Help me find a wife” and note this is no joke. Below the message is the address of a website to connect with Jeevan.

On the website, Jeevan says he is looking for someone who is family oriented, humble and takes every advantage of life. He likes people who are funny and don’t take things too seriously.

A bachelor working in the field of marketing said that it is not easy to put up a billboard to find a wife here. Initially, the London Transport Authority thought he was advertising fast food, so he refused, and it took him a lot of explaining to be allowed.

Jeevan has experienced many forms of online dating, but has never found someone who wants to marry him. At the age of 30, he thought he was not young, so he wanted to find a way to approach girls more directly.

The young man spent £2,000 to make two ads in two weeks. After just a few days, more than 50 candidates came to Jeevan Bhachu. He said he was happy when people responded positively to the initiative to find a wife. But this time, if he doesn’t, he will hire more advertising banners in other London Underground stations.

“Even though there are hundreds of candidates, I really just need to find the right wife for me,” he said.