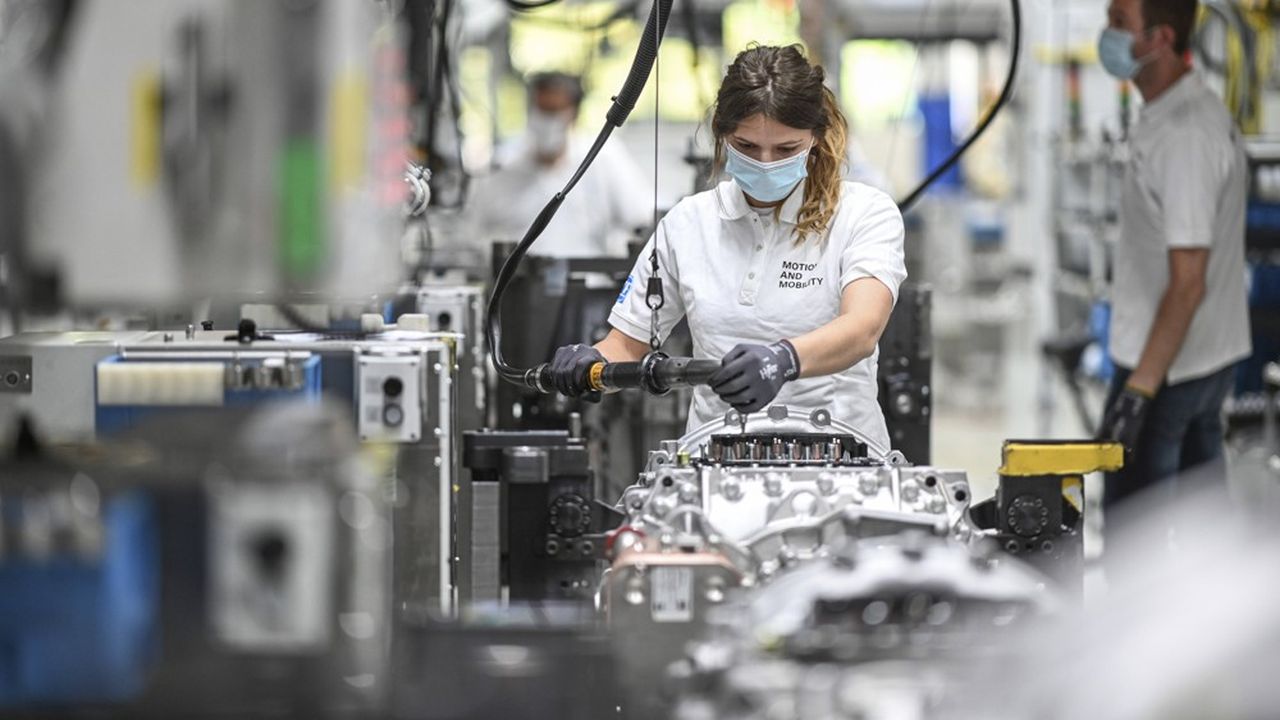 Here, we manufacture “heavy”. Gearboxes capable of doing up to 1.6 million kilometers. Or the equivalent of two round trips to the moon. Packed with electronics, sensors and gears, a TraXon box weighs between 335 and 372 kg depending on the version. Dedicated to heavyweights, the beast is robust, sophisticated and with high added value. It looks like German industry.

680 TraXons roll out of one of the two ZF factories in the town of Friedrichshafen, Baden-Württemberg every day. Enough to employ 1,200 employees in 3/8. Almost unknown in France, ZF also manufactures gearboxes for cars, chassis, brakes, shock absorbers but also radars, computers and safety systems (airbags, belts, emergency braking).

It is the third largest automotive supplier on the planet, behind Bosch and the Japanese Denso, with 32.6 billion euros in turnover in 2020 and more than 150,000 employees, including 52,000 in Germany.

The challenge has grown

Powerful, the group is faced with the same challenge as the entire German automotive industry: to succeed in a shift towards electricity, which will upset the production of some of the factories, weigh on profitability and impose a huge training effort.

The work has grown even further since July, with the “Fit for 55” package proposed by the Commission. This aims to reduce CO emissions by 55%2 new cars by 2030, rather than 37.5%, and impose an end to sales of thermal cars from 2035. This will increase the pressure across the Rhine, when the stakes are already enormous.

An average gross salary of 5,500 euros

VW, Daimler and BMW are among the top five German companies by revenue, along with Allianz and Siemens. The sector generates more than 20% of the turnover of the national industry and nearly 5% of the GDP. It was the source of nearly 17% of exports in 2019 and represents 892,000 direct jobs. Well-paid jobs, with an average gross salary of 5,500 euros for builders and 4,500 euros for suppliers *.

In Friedrichshafen, this omnipresence of the automobile is obvious. The small town of 62,000 inhabitants is home to two factories of the ZF group, its world headquarters and a development center. Located on the shores of Lake Constance, opposite Switzerland, the region is one of the richest in the country, with an unemployment rate of 2.4% last August. Between 30 and 40% of ZF’s 9,500 local employees live in cities. “There are families here whose third or fourth generation work at ZF,” says Friedrichshafen mayor Andreas Brand. “In a party, it is not uncommon for half of the guests to work at ZF”, testifies a resident.

The automobile itself embodies the industrial might and prosperity of Germany. How to preserve such an essential activity, when the shift to electric offers a chance for Tesla, the tech giants and Chinese players to upset the established order?

The tipping point of dieselgate

Across the Rhine, “the dieselgate scandal was a tipping point for the management of car manufacturers, especially at VW. Previously, these focused on traditional technologies. They had to diversify and be more innovative than in the past, ”explains Claudia Kemfert, from the DIW institute.

Driven by China, the German automobile industry experienced a golden decade between 2008 and 2018. After having long sought to slow down the tightening of European regulations on CO emissions2, the VW, BMW and Daimler then massively electrified their ranges from the years 2018-2020.

At the beginning of September, the Munich show was an opportunity for them to present a new salvo of lithium-ion models. The goal? Audi wants to have a fully electric range in 2033. BMW intends to achieve 50% of its sales with electrified vehicles within ten years and the VW brand is targeting a ratio of over 70% in Europe in 2030 with 100% electric cars.

This change has pushed all the major equipment manufacturers to reinvent themselves. The evolution of ZF largely illustrates the phenomenon. Coming from the world of gearboxes and chassis and controlled by the Zeppelin Foundation, the company diversified by buying an American security specialist (TRW) in 2015 for 13.5 billion dollars, then in 2019 a manufacturer of brake systems for commercial vehicles (Wabco) for 7 billion.

ZF has also entered the wind turbine market, where it now sells transmission systems to Danish Vestas. Today, around 75% of its turnover is independent of the engine.

ZF is also recruiting heavily in software, where it plans to hire 2,000 engineers in India within two years. In sectors under stress, such as artificial intelligence, the group is taking exceptional measures. “We are setting up ZF sites near university clusters. In Germany, three years ago we built a research center in Saarbrücken, next to the German artificial intelligence research institute, ”explains ZF CEO Wolf-Henning Scheider.

ZF also relies on training to develop skills internally. “We launched the largest training program in the history of the group called E-Cademy. Up to 15,000 people will be able to follow this program over the next three years. This can range from a few days to three, six or even 18 months full time ”, emphasizes Wolf-Henning Scheider.

It must be said that the end of thermal cars in Europe is scary. Electric vehicles require fewer components and less labor. Their assembly time is 30 to 35% less. In early 2019, the IG Metall union estimated that the electrification of the automobile would destroy more than 150,000 jobs across the Rhine while the electric motor would only create 40,000 jobs at best.

More pessimistic, the VDA automobile federation reassessed the figure to more than 215,000 by 2030. “Since 2019, German manufacturers and major equipment suppliers have already announced the elimination of more than 100,000 jobs,” says Marie Krpata, researcher at study committee for Franco-German relations at Ifri.

At ZF, the social partners have handled these issues “German style”. Worried about the impact of Covid on employment, IG Metall conducted “ZF action days” in May 2020, with employees demonstrating in cars. In June, an agreement freezing forced departures and site closures was signed in exchange for a drop in hours worked.

But the social partners are also seated around the table. “Producing electric propulsion systems requires 2.5 times fewer people than today’s sophisticated transmissions. In 10-15 years, we will have to reduce our workforce in these factories or manufacture new products there. We have given ourselves two and a half years to discuss with our trade unions and find the best possible solutions, ”explains Wolf-Henning Scheider.

Each factory must imagine its future. These discussions will last until the end of 2022 but the group believes they have found a solution until at least 2025 for many sites. At the same time, nearly 2,000 German employees left the group last year, via early departure arrangements and amicable terminations.

At the country level, the shift towards electricity will perhaps also have consequences for the actors of social dialogue. “IG Metall is going to be one of the losers in the shift to electric power,” said Ferdinand Dudenhöffer, director of the CAR research institute at the University of Duisburg. Other unions, such as IG BCE, from the chemical industry, could take advantage of the importance of batteries in electric vehicles.

An impact on industrial geography

Some also expect an evolution in the industrial geography of the country. “With the electric shift, car factories will probably be less concentrated in one or two German regions,” says Claudia Kemfert. A phenomenon illustrated by the establishment of the Tesla factory near Berlin.

Neighboring countries could also bear the brunt of this change. In particular, suppliers specializing in thermal engines, based in Poland, Slovakia or Hungary. IG Metall fears relocations to less expensive countries, such as Bulgaria.

From a financial standpoint, the shift to electric is already having an obvious impact. “Manufacturers have to manage a double structure because they produce both electric cars and thermal cars. This explains the recent drop in productivity in the sector, ”emphasizes Olivier Falck, director for industry and new technologies at the Ifo institute. The electrification of ranges and training are also important. Converting an electromechanical engineer into a software specialist costs a company around 10,000 euros, according to Ifo.

Pressure on the supply chain

This tension is reflected throughout the chain. “Builders have to make huge investments. Suddenly, they seek to reduce their costs and impose increased pressure on the supply chain, ”warns Helene Sommer, representative of IG Metall on the Friedrichshafen-Oberschwaben site and member of the supervisory board of ZF.

In the long term, the switch to electric will undoubtedly change the financial ratios. “ZF now spends 3 billion euros per year on R&D,” says Wolf-Henning Scheider. “This is the highest level ever reached in the history of the group. This represents 8% of our sales. Our level of R&D spending will never return to the level we had in the days of mechanics. “

Too specialized, too small, some Mittelstand companies do not have the resources to reposition their activity. Germany has created a fund of one billion euros to help them, support the major automotive regions and facilitate digitization. Finance Minister and Chancellor candidate Olaf Scholtz announced the release of funds in August.

Fear of a social reaction

In addition to these internal challenges, there are “external challenges”. The industry’s shift to electric will only be successful if consumers take the plunge. “For this, the prices of electric vehicles must drop massively,” says Olivier Falck. “We must tax C0 emissions2 but governments fear social reactions. Suddenly, manufacturers find it difficult to predict the evolution of the electricity market because subsidies can stop, ”adds Ferdinand Dudenhöffer.

There is also a need for recharging infrastructure. “On this issue, Germany is not the problem, it is Europe. If you go to Eastern Europe, you don’t see the ramp-up imposed by the “Fit for 55” plan. In the European Union, we need to install a thousand recharging stations per day by 2030 ”, insists Wolf-Henning Scheider.

Despite the scale of the projects, the sector is nevertheless striking in its serenity. She has no doubts about her ability to maintain her place in the world of tomorrow. It must be said that Germany represents a third of the sector’s R&D expenditure in the world, according to the Ifw ** institute, and that it holds a good part of the patents filed. She has successfully integrated the Syrian refugees, she thinks she can do the same with electricity. “Wir schaffen das ***”, could have said Angela Merkel.