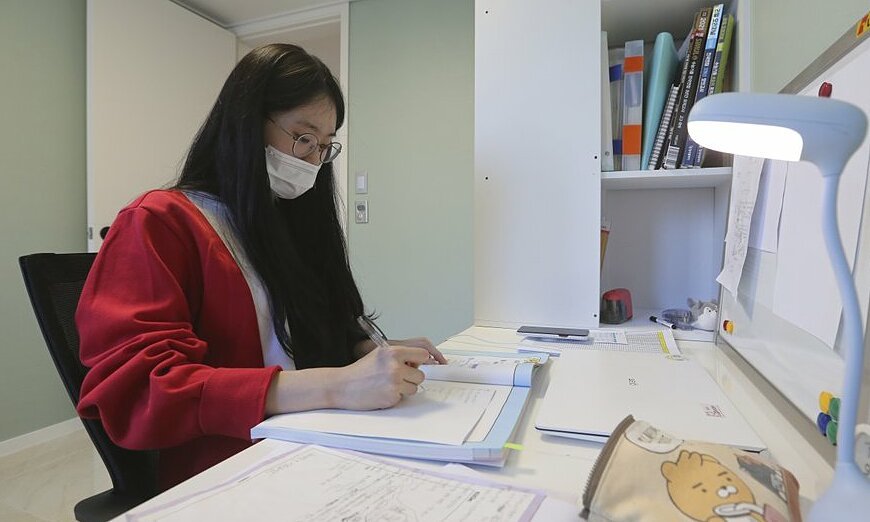 KoreaThe Covid-19 pandemic forced schools to close, shifting to online learning, and this added a heavy burden on poor families.

When Korean schools reopened, Han Shin Bi was struggling to focus on studying. “Studying online is really inconvenient. I just had a bad test result and couldn’t focus on studying,” said a high school student in Seoul.

Like students in other countries around the world, Korean children were very confused with learning online during the epidemic. Experts say that the decrease in interaction with teachers, lack of concentration while studying and some technical inconveniences make learning performance lower than before. It is worth mentioning that the decline in students from difficult families is much greater than for students with middle- or upper-class families. In other words, “rich children” can still easily keep up with the study program and have good exam results due to extra classes or hiring tutors.

According to a survey of 51,021 teachers, about 80% of participants said that there is a large gap in learning outcomes between the best and the weakest students. To solve this problem, the Korean Ministry of Education hired part-time tutors to guide 29,000 elementary school students in difficult circumstances. Some teachers are assigned to individual students with a total of 2,300 students who are not keeping up with the curriculum.

Since the teachers only record and post videos on the internet, Shin Bi cannot ask more questions without understanding the lesson and her family is also ineligible to hire a tutor or take tutoring lessons. “I don’t want to compare myself with others, but if I have a lot of money, I can take more tutoring. I really want to learn English and Chinese,” said Shin Bi.

Even high-achieving students find online learning very “difficult to get into”. “I feel constrained by having to sit still and I’m tired. The most difficult thing for me is not sitting next to my friends so I find it difficult to concentrate on studying,” said Ma Seo-bin, a student. share high school students.

When South Korea gradually reopened schools in May, officials sent high school students to school first to prepare for university entrance exams that will take place in December. In Asia, which university to go to will determine almost everything about your future: Your job, social status and even your partner.

In June, when hundreds of thousands of students took part in a mock test to prepare for the December college entrance exam, the number of students scoring poorly increased abnormally. According to Kang Minjung, a member of the Korean parliamentary education committee, the result reflects “the polarization in education has become severe”.

According to a survey by the South Korean government of tens of thousands of parents and teachers in this country, about 75% of Korean students participate in private education services (private tutoring or tutoring) at an average cost of 377 USD per month. The survey also found that middle- and upper-class families spend five times more on education than low-income families.

Ma Seo-bin’s parents – now working at a private English school – said the couple spent about 2 million won ($ 1,750) per month on their daughter’s private tutoring and 20 million won ($ 17,550). per year tuition and dormitory room fees. Although the money is a burden for both husband and wife, Seo-bin’s parents said they are willing to pay because education is so important to their daughter’s future.

“I don’t feel any regrets. However, I also feel very tired. I really can’t take care of myself because I don’t have the time or the financial resources,” said Ma Moon Young, father of Seo-bin, confide.

YH Yoon, a single mother with three children in Seoul, said she is worried that her sons are unable to do well in school because she cannot afford their children to take tutoring. She also has to work hard to support her children, so she doesn’t have time to tutor her children at home.

However, even though her family has had difficulties due to the pandemic, she still encourages her children to study hard so that they can get into good universities. “I told them: Do they want to live like a mother in the future? My parents used to tell me that and now I talk to my children again,” she shared.

Khanh Ngoc’s (According to AP)