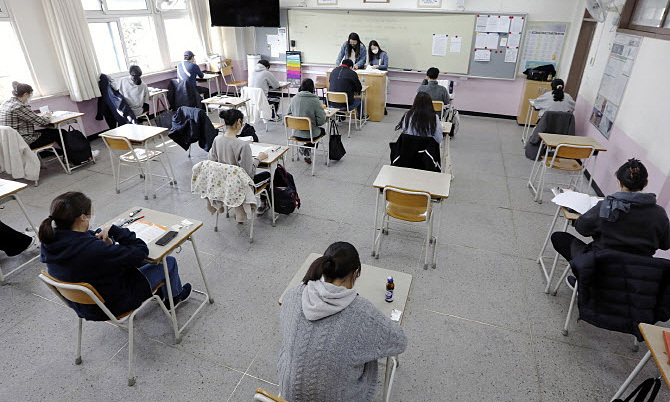 KoreaMany young people put all their money and time into the state civil service exam, despite the consequences, if they fail, they will lose job opportunities and lower wages.

According to the published thesis of Park Sung-jae, a senior researcher at the Korean Labor Institute, the number of people taking the civil service exam in this country is increasing. In 2015, there were 218,000 people registered for the civil service exam. This number increases to 279,000 people in 2021, accounting for 33.7% of the total number of people preparing for job recruitment competitions.

Korea is famous for its harsh civil service exam. Noryangjin, Seoul is known as the “exam village”, where thousands of students gather to prepare for the civil service exam. The area has dozens of exam preparation centers for the gongshisaeng group, which is a combination of the three words gongmuwwon (civil servant), siheom (test) and haksaeng (student).

A survey of 3,100 university graduates from the youth group of the Korea Employment Information Agency said that only 643 people prepared for the civil service exam and 103 passed the exam.

In the provinces of Jeolla and Gyeongsang, where job opportunities are poorer than in urban areas, the proportion of university graduates taking the entrance exam for civil service is higher. But research also shows that failure in the civil service exam will adversely affect the quality of employees’ future jobs. When many people will lose the opportunity to compete in the job market, after a long time of studying for the civil service exam.

Three years after graduating from college, hourly wages for failed test-takers were 5.6% lower than employees with no experience. This difference increases to 12% after 5 years.

“With the structure of the labor market, combined with low recruitment demand, positions in high-quality jobs are quickly filled. Spending a long time studying for the exam only increases the likelihood of being hired. lower into other jobs,” said researcher Park.

In fact, many people are pouring large amounts of money for the exam into civil servants, but even if they are accepted, they cannot earn the equivalent amount of money back.

In addition, Covid-19 has dealt a blow to the job market in this country as many companies drastically cut staff to maintain operations. A recent survey by the Federation of Korean Industries shows that more than 42% of the country’s top 500 companies have no hiring plans for the first half of this year; 7.9% said there is no recruitment plan. The global health crisis and talent shortage are the two main reasons given.

Seol Dong-hoon, a sociology professor at Jeonbuk National University, said the desire to become a civil servant has a long history in society, because this job has a good pension. “But since 2015, after the pension reform policy, the pension scheme is no longer attractive. This makes many people discouraged and seek high-paying jobs,” said Professor Seol.

“Many of my friends have given up preparing for the civil service exam. We have to lose a large amount of money but cannot recover the capital. At this age, I want to run the project, experience the challenge instead of thinking about it. state for stability,” said an unnamed girl, who once dropped out of the civil service exam.

But even after passing the harsh exam, many people still quit their jobs. “They realize that the job that spends a lot of money and time to strive for is now not suitable,” said a civil servant surnamed Choi, whose career spanned three decades.

She believes that the older generations can endure hardship and rigor to stay, but the younger generation is different. “They quickly find career alternatives,” says Choi.

In addition, the research results of Mr. Park also show that more policies are needed to curb the fever of civil service exams, in order to reduce damage to the workforce in the future.

Minh Phuong (According to koreabizwire, koreatimes)