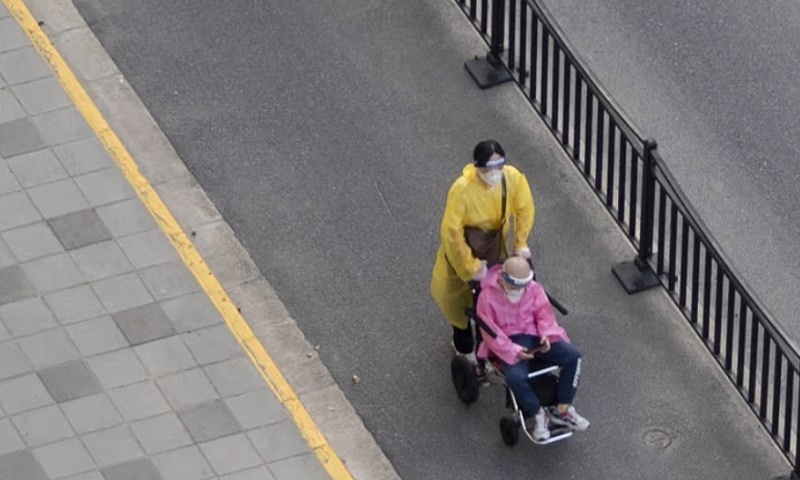 On March 22, Mr. Yang Weimin’s neighborhood was locked down because a positive case appeared while he and his wife only had food for 3-5 days.

Like many other Shanghai residents, grandparents do not store food for weeks or months because they know the supermarket is always full.

However, that was before the blockade order was issued. The 66- and 59-year-old couple were caught off guard, not thinking about the situation that money could not be bought during the epidemic season. Speaking to the press on April 4, Mr. Yang said that for many days, his family could not buy meat, eggs or milk. “I had a stroke. The doctor told me I need to eat enough protein every day for my body to function properly,” Mr. Yang said.

Instead of every day, they drink a glass of milk every three days. “If I blockade for a week or 10 days, I can still survive, but now it has been more than 20 days,” he lamented. His 28-year-old daughter is isolated in another block with her grandmother, unable to provide for her parents.

Two elderly people do not use smartphones due to Mr. Yang’s severe myopia and his wife’s retinal detachment surgery.

During the deadlock, Mr. Yang saw a piece of paper stuck to the door of the building when he went to take out the trash, with the content: “Currently, the food supply is in short supply, so it is difficult to buy. Some groups will organize purchases. for residents. If you can’t use WeChat, you can tell me what you need, the team will contact you to help.”

Wang Haoyu, 27, who wrote the notice, said he and his girlfriend were worried about the elderly living in the building. He can buy food through many channels, although it is much more expensive than the market, so he decided to help the elderly.

Together with the building representative, they plan to prioritize helping the elderly to buy food. According to statistics, Mr. Yang’s family is among 8 out of 10 elderly households in need of assistance.

Thanks to Wang’s actions, Mr. Yang and his wife received the milk, eggs and meat they had been craving for many days. “It’s not a beautiful story of young people helping the elderly, it’s more of a tragedy,” Wang said.

In addition to food, medical services in Shanghai are in short supply. It is almost impossible for people to go to the doctor. According to information from a group of volunteer university students, more than 1,680 requests for medical services have been sent to this group.

Most patients require help with chronic medications, routine chemotherapy, dialysis, and psychiatric medications. Of which, more than 1,000 requests have not been processed. Xu Yixing, 18, a volunteer, said more than half of the people needing help are over 60 years old.

Shanghai is one of the first Chinese cities with an aging population. According to the 2019 Shanghai elderly population monitoring census, there are more than 5.8 million people aged 60 and over in the city, which means one in three people is elderly. The number of elderly people living alone reached 317,400. This is the most vulnerable group in Shanghai during the indefinite blockade, largely due to illness.

Another big problem that elderly people face during lockdown is social connection. Wang Houhou, 29, who lives with her boyfriend in an old building, said her neighbor is an old man in his 80s. He did not know what the world was like out there and kept asking if the blockade order was lifted.

“He is hard of hearing, lives alone in the apartment next door and rarely goes out. I only found out because our building is poorly soundproofed, so I could hear his TV at three. this morning and the loud coughing,” Wang said.

Loving the old man alone, she wrote a sticker on the door to inform that she could ask for help if needed. After that day, Wang repeatedly received calls from neighbors asking to find a doctor and buy food.

Recently, the old man knocked on Wang’s door, gave her a comic book and 500 yuan. “Thank you Wang and Li for taking care of you,” the old man wrote in a note.