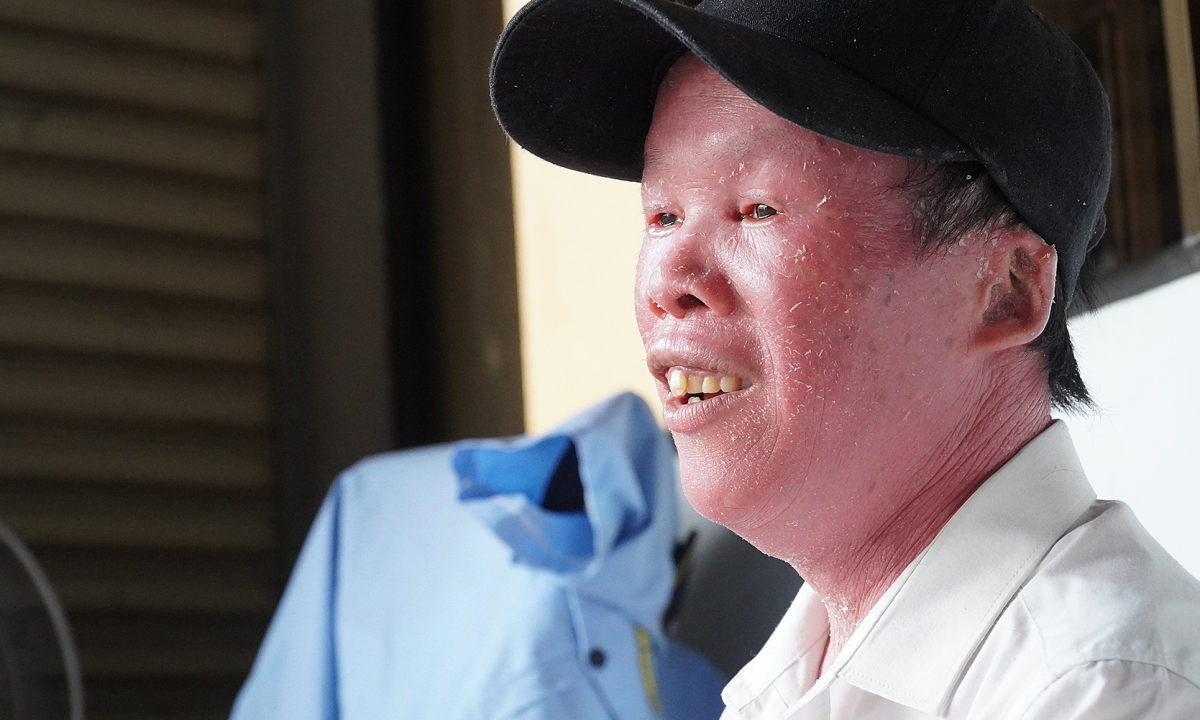 After six years of wandering around Hanoi, Saigon Nong Van Phuong has only one dream, which is to have a stable job to support himself.

At 3 pm one day in mid-September, when the workers of a wood factory in Binh Chanh district, Ho Chi Minh City got off work, Nong Van Phuong hurriedly opened the book, recorded the time of entry and exit, and then let them sign. Finished work, he ran back to District 11 to wash and cook to wait for the guard shift for the pub in the city. Thu Duc. “Having a job is very precious, so I never refuse to be called,” said the 25-year-old man, from Nam Ban commune, Meo Vac district, Ha Giang province.

From the day he entered Saigon, Phuong couldn’t remember how many places he applied for a job, but most of them refused when he saw his red, scaly skin every now and then.

The mermaid, the exiled boy, the forest man… are the names that stuck with him throughout his childhood. In 2005, the story of an 8-year-old boy with rare systemic psoriasis, living alone in a hut at the edge of the forest for 4 years stirred up public opinion nationwide and the press.

Phuong said, at the age of two, the skin began to appear red blisters like blisters, then spread, papules and then peeled off in layers. Seeing Phuong’s figure, people in the neighborhood said that Phuong had leprosy, if not isolated, it would spread the disease to the whole village, harsh people thought that it was “evil appearance” so everyone stayed away. Seeing that the neighbors were frightened and chased away, Phuong’s parents built a hut a few hundred meters away from the house, close to the edge of the forest for their children to live in. Without care, Phuong’s condition worsened. The scab was so thick that the boy’s hands could not even bend, when he tried to reach out, the skin cracked, oozed blood, and his legs also gradually atrophied.

When discovered by the press and benefactors raised money for treatment, the 8-year-old boy weighed only 13 kg. Since then, Phuong’s bag always has a tube of ointment to soften the skin. His body is weak, but he is very eager to learn. The school is 14 km away from home, Phuong wakes up at 2 am, lights up along the bumpy, rocky roads to class.

In 2015, Phuong’s mother died of cancer, making the family more difficult. There is only one corn season and one rice season in the whole year, which is not enough for the three brothers. Phuong discussed with her father a plan to go to Hanoi to find a job. Mr. Nong Van Lieng said nothing, brooding by the fire for a long time, then nodded slightly.

One afternoon at the end of 2016, Phuong took a bus from Ha Giang to Hanoi, with only 175,000 VND in his pocket. He wandered around applying for a job, sleeping huddled on a stone bench at night. After being rejected many times, Phuong was accepted to work as a security guard at a fashion store.

In Hanoi in winter, it was very cold, causing Phuong’s skin to begin to dry and crack. A few customers in and out looked at him shyly and then told the manager, Phuong had to quit.

When he was depressed, he was suggested by an acquaintance to “go to the South, there is no winter in it”. After thinking for a long time, Phuong decided to collect all her savings and buy a train ticket to go to Ho Chi Minh City. “At that time, I weighed only 48 kg, my body was small, and I had scaly or peeling skin, so people didn’t dare to accept it,” he confided.

After many restless nights thinking, Phuong got up and wrote a post on social networks: “Hello, I am Nong Van Phuong, a person with psoriasis since childhood. I have just arrived in Saigon and really want to find a friend. If there is a need, everyone can contact me by phone number …”. A few days later, a person contacted him asking for help with durian delivery. Phuong cried tears of joy.

The South doesn’t have cold days, but Phuong has to face the harsh sun, making his skin red and burning like it’s been burned. In the summer, he can only deliver early in the morning or when the winch is off. On the street, he always covers his body with long-sleeved shirts, masks, hats… According to Phuong, this is a way for customers not to panic.

Orders are not regular, Phuong’s life is extremely difficult. There were days when he sat on his knees and listened to his father’s phone, until his father asked: “Are you okay?”, his emotions were broken. He wanted to tell his father a lot about the times he was rejected, rejected, about the salary that was not enough to pay for accommodation and meals. But in the end, he still replied, “I’m fine, Dad.”

Turning off the phone, Phuong went back to looking for work. Also thanks to the post on social networks, a security company called him, invited him to try a job at a store in District 1. The manager loved Phuong’s situation but still advised “be careful to stay away from customers, em. Please”.

On rainy or sunny days, the boy from Ha Giang still works diligently, driving cars for customers, arranging cars, cleaning saddles. Phuong said, when I have a defect, I have to work twice or three times as much as other people to make it perfect. On the occasion of Tet that year, a customer in Go Vap who liked the hard-working boy offered to give him 1.5 million VND. However, he refused because ever since he got a job, Phuong only wished to live by his own strength. The salary of 6 million per month is balanced by him for medicine, food, accommodation and travel expenses.

When Tet came, Phuong chose to stay in Ho Chi Minh City instead of going back to her hometown to save money. The five days off at home were when he felt the loneliest. He remembers the smell of pork at the kitchen counter, longing to sit and bake corn in the middle of a clear morning, holding his hand by the flickering fire. Lying in the motel room, Phuong wants the day to pass quickly to continue working.

“I don’t have many friends, so I go anywhere, do everything alone. Since my father had another family and two younger sisters got married, I also started an independent life. Sometimes it was difficult and sad to want to live. When I called home, I picked up the phone and put it down again. Over the past 3 years, I’ve been struggling but still can take care of myself. For someone who has been sick since childhood, that’s also a happy thing.” Phuong said.

Mr. Nguyen Bac Toan, 39 years old, a roommate said, despite illness, Phuong is very self-respecting. There was a period when the security company lacked people, so he let him work, when they found someone, they let Phuong rest because he was afraid of psoriasis. With no money to rent, Phuong wandered around and was invited by Toan to stay with him.

“At first, everyone was afraid of psoriasis, but then they all loved Phuong’s gentle, hard-working personality,” Toan said. After getting a job, Phuong immediately returned the borrowed money and divided equally the rent, soap, gas… with everyone.

Currently, Phuong is accepted to work as a security guard, looking after workers for a wood factory. Outside of that time, every time someone else was on duty, he accepted. Some days, Phuong’s working time is up to 12 hours, ending at dawn.

“Going through many difficulties, I believe that today I live a good life, tomorrow will be a brighter day,” Phuong said.