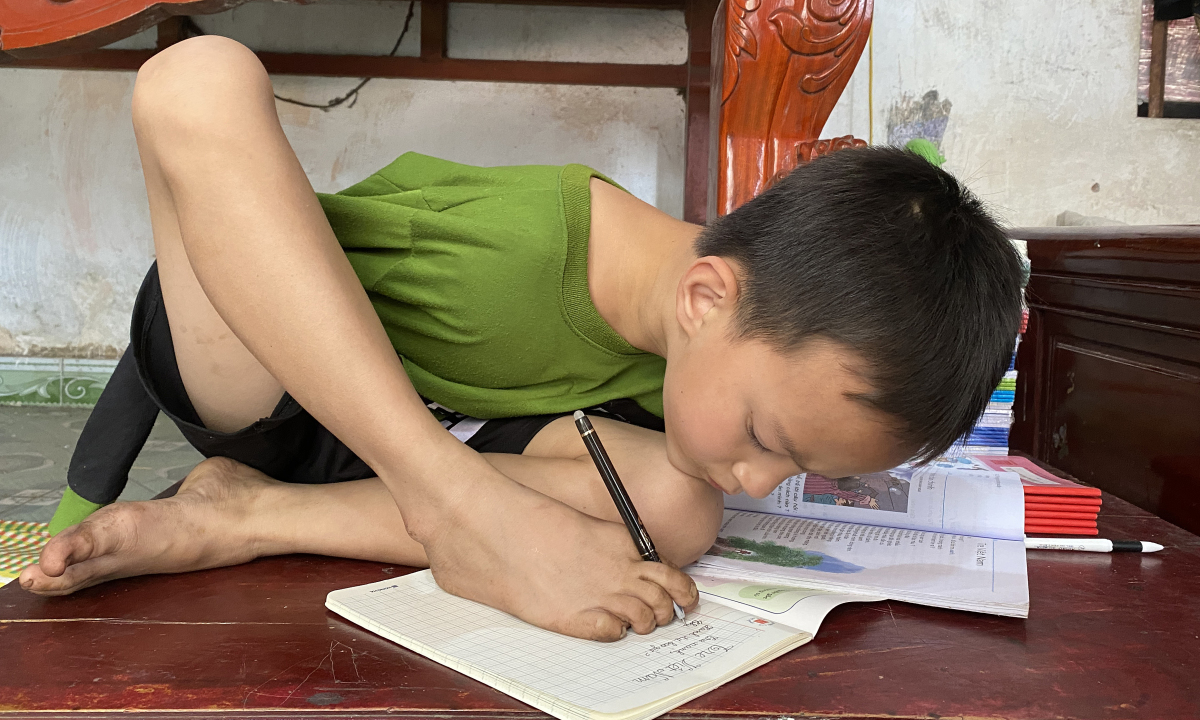 Bac NinhBorn without arms, every day copying with his feet, Dong Khai (8 years old) still tries to study, dreams of becoming a doctor to “make up medicine to grow hands”, to help bother his grandparents and parents.

On the morning of the end of April, in a 40-square-meter fourth-floor house in Phu hamlet, Ninh Xa commune, Thuan Thanh district, 8-year-old Nguyen Dong Khai, again with his right foot, picked up books and pens and began to do exercises like: everyday.

On a wooden plank nearly a meter long, with his left leg bent so that his knee could not move, he held a pen with his right foot, and Khai gave the first handwriting to copy the poem “Green Bamboo”.

At the end of the first stanza, the boy twisted his red toes to relieve fatigue. The skin between the fingers is hard. Five years ago, my grandfather Nguyen Van My, 70, taught me to write with my feet, because I was born without hands.

Dong Khai is the second child of Mr. Nguyen Van Thinh, 36 years old and Ms. Nguyen Thi Phuong, 29 years old. On the day of her pregnancy, Phuong often went for ultrasounds and health checks, but no doctor discovered anything abnormal. Both sides of the family count the days to welcome the grandchild.

When the boy was just born, the doctor announced: He has no arms. Phuong was dumbfounded. “Recalling the feeling that day, I was still shocked, looking at my child’s short arm and helpless. What should I do in the future?”, the mother said.

Taking him home, in the early days, Mr. My’s family did not dare to go out, fearing that the neighbors would disagree. “Someone had a bad mouth saying how to give birth to a child without arms,” ​​he recalls. Every time I change clothes for my grandchild to take a bath, or when I see Khai using his two legs to push himself like a worm on the bed, Mr. and Mrs. My burst into tears.

“Kai has a disability in his hands, but he is happy to be healthy. The family will take care of him and raise him to become a human,” he comforted his daughter-in-law. After the end of the period, Thinh and his wife went to work, asking their grandparents to take care of their grandchildren.

Knowing that he could not crawl for three months, crawl like normal children, when Khai was strong, Mr. My taught him to sit, then he learned to walk. The scene where the grandchild took a step, he followed half a step, his hand supported the child’s body from falling, is not strange to the people of Phu village. “Apart from the lack of hands, the boy is developing normally. Two-year-old can speak fluently, feed himself, play with toys and do simple tasks with his feet,” said the next-door neighbor.

When he was three years old, Mr. My tried to ask Dong Khai to go to preschool, but the teacher was a bit afraid, afraid that it would be difficult to take care of him. After going to school for a few days, Khai came back and asked him: “Why don’t I have hands like your friends? When will my hands grow back? Why do you guys keep calling me amputee?”. Knowing that he could not hide his grandchild, Mr. My explained that “the hand does not grow back, but the leg can be used instead”.

Since then, the 70-year-old man began to teach him how to write with his feet. At first, Khai learned to hold chalk between his thumb and index finger, but his toes were stiff, unwilling, several dozen boxes of chalk shattered because of the strong squeeze. When he got used to holding chalk, Mr. My guided him to practice painting horizontal and vertical strokes in the cement courtyard in front of the house. After practicing coloring the alphabet, learn to write numbers.

Every time he practiced writing, the boy struggled, arching his back to each word, sweat running down his cheeks. Many times, the place where the chalk is clamped is swollen and bleeding, and the legs are cramp, numb and unable to move. That whole night, Mr. My sat down to massage her baby to sleep easily. But there was a time when it was so painful, Khai said “I don’t want to write”, he told me about the energy of people in the same situation as teachers Nguyen Ngoc Ky and Hoa Xuan Tu to inspire him.

Proficient in writing large letters, Khai practices writing small letters. Two years later, the chalk, the pen no longer makes it difficult for her feet. Without practicing writing on the field, I became familiar with the blackboard and oligarch. The handwriting is beautiful, neat, neat and straight.

When he was 6 years old, his family planned to let Khai go to a provincial school for the disabled, but Ninh Xa Primary School decided to still accept him because he knew the energy of “the penguin”. In class, the school closes its own desk and arranges children to sit at the front desk. Teachers also arrange classrooms on the first floor for convenient transportation.

In the early days, teachers were still skeptical, afraid that Khai would write with slow feet and could not keep up with his classmates. But seeing the student neatly write each word, go home to practice to increase speed, everyone gradually calms down. After a few weeks, I got used to the learning rhythm, wrote faster, the teacher didn’t have to wait for dictation. In addition to learning Vietnamese well, the boy also has a talent for fast mental arithmetic and good drawing.

Seeing that Khai has a different appearance, many friends teased and called him “a dead man”, “a child without arms”. Without replying, I pursed my lips and ran back to tell him. “Ignore them. As long as you study well, you won’t be able to laugh at them”, Mr. My comforted him.

Every morning, the 70-year-old man gets up early, prepares clothes and food, then takes his bicycle to take his grandson to school and pick him up at noon. At home, his wife takes care of the fields and prepares rice and water. After dinner, the two of them sat down to study again. Currently, Dong Khai is proficient in using chopsticks and spoons to eat rice, can bathe, change clothes, use tablets, and control TV with his feet. Only going to the toilet is still supported by the family.

“Khai has two hand defects but is very smart, studying well, being obedient, good at writing, and eager to learn. Neighbors and teachers all recognize it. To get the initial results like today is a lot of effort, perseverance of the whole family,” said Mr. Thao.

Many people asked him what he dreamed of doing when he grew up, but Khai was just silent. “Only once did the boy confess his dream of becoming a doctor to make medicine to grow his arms, take care of himself, and not disturb his grandparents and parents,” said Nguyen Thi Tuoi, Khai’s grandmother.

Now, Thinh and his wife encourage each other to try to do business, saving a few million each month for their second son. “The boy is doing very well at school. Every time he meets his parents, his teachers praise him. If he has the ability to go to university, even if he has to borrow money, my wife and I work together. I just hope that he grows up and becomes a useful person for the society. association,” said Thinh.