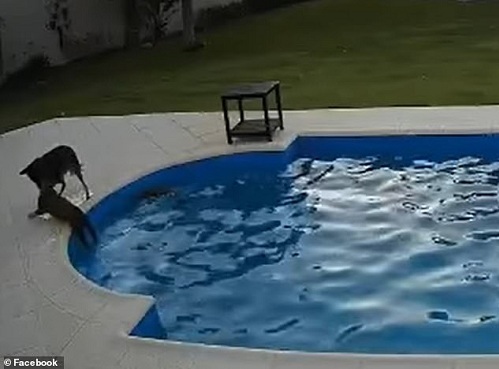 ArgentinaThe puppy Caipirinha ran over to bite the blind dog Luna’s neck, pulling it toward the shallow water as Luna fell into the pool.

The video cut from the camera behind the house was posted by Julieta Firpo, in the town of Sunchales, the owner of the two dogs on the social network on January 2, 10 days after the incident.

Julieta says that Luna, 14 years old, is blind so she has been disoriented lately. While passing by the swimming pool in the family garden, it fell. In the clip, the pit bull Caipirinha immediately runs to the swimming pool. It dropped one leg into the water and bit on Luna’s neck. The little dog tries to hold the injured dog firmly and leads it to the shallow part of the pool.

The dog saved the blind ‘brother’ from falling into the pool

Thankfully, Luna was able to climb up the pool’s stairs by herself to climb out.

According to Julieta, normally, Caipirinha and Luna are very close. The little dog was rescued by her family on a vacation, after its owner threw it out of a car window at a gas station in Brazil.

Many people watched the clip praising the smart and kind little dog. “The dog is very good,” said one. “This is an excellent rescue dog,” said another.

Intelligent Update (According to the Metro)