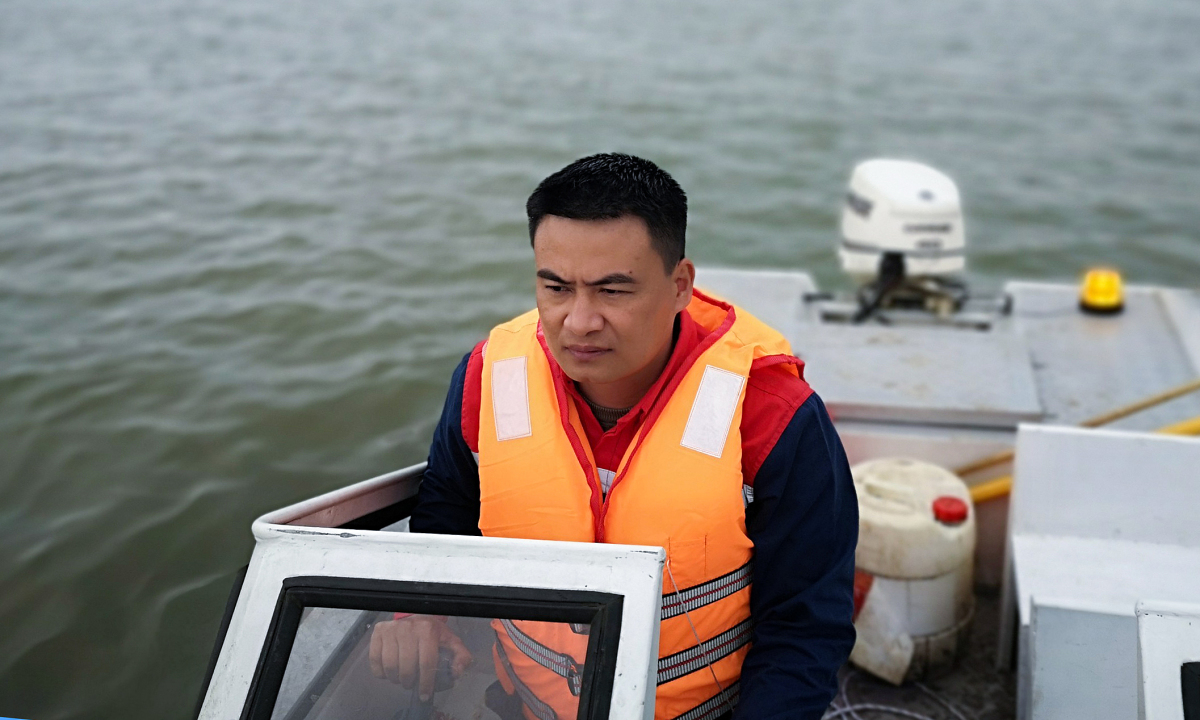 The canoe was lifted up by the waves and then lowered his nose into the water, Nham Quang Van held his breath just worried that he could not find the victim, then he would sink.

This is the first time Van’s rescue team has operated at sea. The 39-year-old man still remembers midnight the night before the team’s hotline received a plea from the victim’s family, asking to find two siblings aged 9 and 13 in Tan Xuyen, Hai Thanh ward, Nghi Son town (Thanh Hoa province). Chemistry). The family said, at 3pm on May 16, the two children went to the beach to bathe, were swept away by the waves, so far no trace has been found.

Right on the night of May 18, everyone immediately hit the road. Near morning, the whole team lowered the canoe and was transported by car from Vu Thu district, Thai Binh province, coordinated with border guards and local fishermen to search.

After eight hours floating at sea, running along the breakwater to the rapids, at noon on the same day, the rescue force discovered the bodies of two children, brought them ashore and handed them over to their families.

“This is the first time I have met a rescue team from another province, voluntarily coordinating with the authorities to search for victims,” ​​said Captain Nguyen Van Trong at Lach Bang border checkpoint, Hai Phong border station. Hoa (Thanh Hoa), who was looking for two brothers who drowned, said. Mr. Trong added that the rescue team did not take any money, even contributed more money to the victim’s family to take care of the aftermath, making the people and local authorities very grateful.

Regarding the situation where the canoes were lifted by the waves, Captain Trong explained that the rescue team’s canoes are small, specializing in running in rivers and lakes, not suitable for going to the sea. Seeing that the group was determined, the sea weather was good, the unit agreed to let the team out to support, under the guidance and channeling of the border guards.

This is just one of hundreds of cases of search and rescue of corpses that Mr. Van and his colleagues have carried out since pursuing free water rescue and rescue work since 2020. This time, he regrets. especially because the two victims were young, brothers and sisters.

“I always believe that doing a good deed will reduce a bad one and do not expect to be reciprocated,” said Mr. Nham Quang Van.

He used to be the director of a transportation company specializing in providing cargo cranes and erecting factories. In 2015, during a business trip to Con Vanh beach, Tien Hai district (Thai Binh), a barge carrying equipment and 7 engineers sank 5 km from the shore. The location of the accident was in the right part of the sand, the crane protruded into the water, enough for the group to climb up and fortunately were rescued by the fishing boat. Since then, he has always struggled to save people in distress on the river to repay the favor but never had the opportunity to do so.

In October 2020, he and his friends and colleagues supported the delivery of 60 rescue vehicles with 0 VND, moved more than 100 canoes and necessities from the North to aid the Central region during the historic flood.

After 28 days of charity work, receiving thousands of calls for help, Mr. Van understands better the suffering and despair of people stuck in the water. After the trip, he bought a canoe and two small boats himself and established the 116 Water Rescue Team, to provide free support to boats and people in distress on rivers in Thai Binh and surrounding areas.

As a father of three and inexperienced in water, his plan to set up a water rescue team worries his family. But he was supported by his wife. “Many people say that my husband is crazy, free, and has too much money. Other people run away when they see a dead body, but I rush in. Knowing I can’t stop, I just told my husband to take care of his health and not be in danger,” said Ms. Hoang Thi. Oanh, Mr. Van’s wife, said.

Hoping more people know about his service, Mr. Van attaches the rescue number on his personal page and shares it in groups. At first, he went alone, sometimes adding a company employee to support him if he had a difficult case. Funding to maintain operations is deducted from business profits, the company he assigns to someone else to temporarily manage.

“The difficulty of this profession is having to be brave, not afraid of difficulties or asking for compensation. I believe that anyone who wants to participate will actively participate, not force. Fortunately, in recent months, someone has applied to join the association,” Mr. Van said. . Currently, the rescue team has 8 core male members, aged between 22 and over 50.

For the rescuer, the phone is an inseparable object, even when sleeping, the members are still in a state of readiness to accept the task. Most cases are caused by family members calling the hotline for help, but sometimes the group updates information and actively asks for support.

“Unless bad weather, heavy rain or fog hinder the search, we will work through the night. Difficulties and hardships away from family, fasting all day, but the members have never been able to find anything. thinking about giving up,” said Dang Hong Quang, 50, a member of the team.

Two years of water rescue and rescue, Mr. Van can’t remember how many times he found drowning bodies from Thai Binh to Quang Nam, but on average there were 4-5 cases per month. Near and far in the province, 300-400 km away, each case takes a few hours to a week to search, depending on river topography and water flow.

“There was a time when 3-4 drownings occurred at the same time, far apart, I didn’t know who to accept and who to refuse. I just wish there were more vehicles and people,” he sighed.

But to find and retrieve the bodies of people in distress underwater needs a lot of experience because the river is immense, the current is tight, it is difficult to locate. When receiving the request, the group must discuss together, calculate the time when the body sinks, predict the water up or down, the direction of flow to locate the search area.

Two years of dedication to this job, the whole team is always grieving with the image of a disfigured corpse and the lamenting cries of the victim’s family. After handing over to family members, the team continues to stay to support bathing, makeup, sponsoring clothes and worshiping items or calling for sponsors to help families in difficult circumstances.

Anh Van said that in recent years, most of the victims are young people. Particularly in the first half of June 2022, the support team picked up 4 to 5 cases. “I always propagate and expect parents to take care of their children carefully, not being subjective to tragic incidents,” said the captain of the rescue team.

Supporting hundreds of families to find drowning people, but before the offer to send money and thank you gifts, Mr. Van consistently refused even though the cost of transporting canoes and petrol costs more than tens of millions of dong each case. If families give boxes of cakes and tea, I would like to accept them, so that they will feel less indebted.

But there are still people who don’t understand, consider rescue and rescue as the responsibility of the group, leading to improper attitude, making him heartbroken. “Anyway, my brothers and I still do it because there are many difficult cases that need help,” Van confided.

Seeing that the director “eats food from the prison and carries the general goods”, many times fell ill because of labor, many people said that Ms. Oanh advised Mr. Van to focus on doing business. But she shook her head.

Mr. Pham Quang Tao, Chairman of the People’s Committee of Tu Tan commune, Vu Thu district, said that Mr. Van and the group’s work was “very meaningful and should be replicated when targeting difficult situations that need help”.

Returning from the rescue in Thanh Hoa on June 13, Mr. Van is calling on benefactors to help, buy a standard canoe to set up a different rescue team, hoping to help more people. In addition, he also plans to open free swimming lessons for children and hang lifebuoys on bridges in Thai Binh province.

“But I still hope that the rescue and rescue of waterways is sluggish, the phone no longer calls. One more request for help is another tragic incident,” Mr. Van confided.