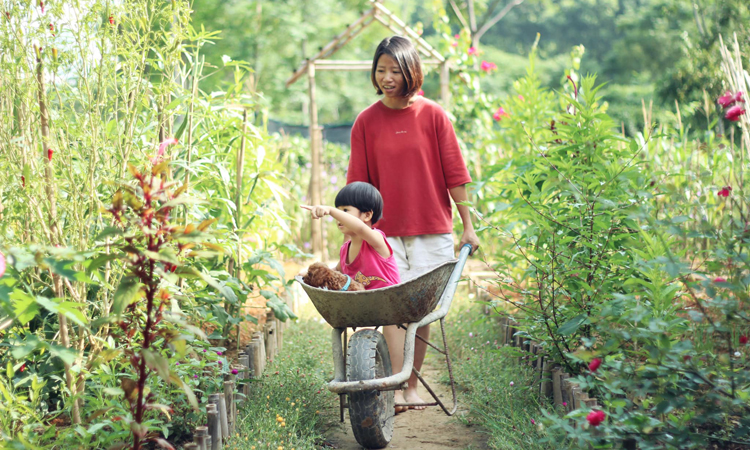 Thai NguyenHaving rented a 100 square meter land plot, Nguyen Thi Ngoan immediately checked out and rented a room in Hanoi to Thai Nguyen who carried bricks, built a house, built a garden, and lived a plantation at the age of 27.

While watering the vegetable beds in front of the house, the neighbor lady passing by grabbed Ngoan’s hand with some grapefruit and then turned away. The girl had just put grapefruit on the table made from the old window, when the chickens and ducks kept coming together to ask for food. After waving some of the cold rice for them, she pulled the sleeve of the sweat from her forehead and smiled contentedly. “I have only been back home for half a year, but I just hope my life will be as peaceful as this,” shared a girl who graduated from the University of Architecture.

On the 100 m2 land rented next to her sister’s house, over the past six months, she built a grade 4 house of 20 m2 by herself and renovated the garden to grow vegetables and fish. Just every day hoeing soil to pour into beds, building fences, making roads … now the trees are green. Bougainvillea trees and roosters in the garden have taken root in the hilly land, reaching high branches every day. The house is far from the market, there is no supermarket, so the garden is the place to provide daily food for Ngoan.

“For me, I’m not going home to run away but to do what I want,” Ngoan said.

Being a farmer in Kim Bang, Ha Nam, Ngoan had to work part-time during his years at the University of Architecture to support himself. After graduating from school, she applied to work as a designer at a carpentry specialist in the processing of children’s toys. Once happened to see a documentary about salmon flocks upstream to give birth, the idea of ​​crafting wooden fish with different messages such as blue whales to protect the environment, carp Demonstrating the constant effort to overcome the dragon dance … was born. Initially, no one believed this product could be sold.

Ngoan resigned, opening a small shop selling hand-designed products. She renovated the store herself from a humid place, near an unobstructed toilet, into a check-in spot sought by many young people. Since then, Ngoan’s wooden fish started to be noticed and appeared first customers.

The job was gradually stabilized, the mother became seriously ill. Before her death, she told her youngest daughter: “Don’t be like your mother, do less, take more care of your health”. In February this year, the owner suddenly reclaimed the store. For three months only in the inn because of the translation of Covid-19, Ngoan began to contemplate a new direction, away from the city. “Back home, build a small house, design a carpentry corner, there is a small vegetable garden in front … so I have my life completely”, Ngoan remembered his mother’s advice.

Thinking about it, the next day, she called her sister in Thai Nguyen to ask to rent out the land next to her house. Her sister protested and advised her to continue to “stick to” in Hanoi, not to return to her hometown to do anything to suffer. “Parents are gone, wherever they go, it will be home,” she said and affirmed, “No one can live their life for me. It is life to do what you love to do.”

On a 100-square-meter lease, Ngoan designs his own futuristic house and garden. Without drawings, all ideas are only communicated to masons by mouth. In order to save costs, except for the worker’s job, she did everything by herself. Obediently asked for the old doors to remove, use sandpaper to scrub away the dirt, paint and fix it to make doors, fences, tree hangings. Saving workers, the girl also carried bricks to build a house by herself even though each brick weighed up to 20 kg. Every day she works with grouting, shoveling soil, building fences, pouring soil to improve the garden … things she has never tried before. After three months, his hands became rough, shaking every time he held the brush. It took more than a month for her to have the feeling of holding back her normal brush to work.

In return, the dream house is small. Being a cook and passionate about handicrafts, Ngoan designed his own kitchen with wood and bamboo materials and decorated it with wooden fish. Living alone, the furniture in the house is quite simple. In addition to the small kitchen with two sunny windows, she also has a large enough office to inspire creativity every day.

Living in a noisy and bustling countryside like the city, Ngoan wakes up every day from 6am and feeds chickens, ducks, cats and dogs, watering plants, picking flowers and arranging pots and walking around watching the garden. She only started making wooden fish for sale online when her spirit felt the most refreshing. In the afternoon, when her work is completed, she cooks herself, plays with her niece next to her house or goes to pick up small things such as branches, discarded wood, eggshell … recycle into decorative items. . Unlike Hanoi, Ngoan has a plentiful resource for her to realize all her ideas.

Ngoan garden is not too luxuriant with vegetables and fruits but also provides enough food for each day. She only goes to the commune market once a week to buy additional fresh meat in the fair markets. The menu also popped up with ingredients available in the house without wasting time thinking about what to eat today.

Back home, the 27-year-old girl does not see much change in life because she still works normally, the only difference is that there is a garden and a flock of chickens and ducks needing care. Everyday, she can still connect with friends and relatives via the Internet. In his free time, Ngoan brings his camera to take pictures for everyone in the neighborhood, or goes to the garden to pull grass to plant trees, enjoy the park.

This girl said this land was rented for 10 years. If one day the landowner asks for it, she is also willing because no one knows what she will be tomorrow, so she wants to live her best for today.

“I am living in accordance with my own preferences. It is a gentle life to enjoy the tranquility and peace of mind,” said the 27-year-old girl.