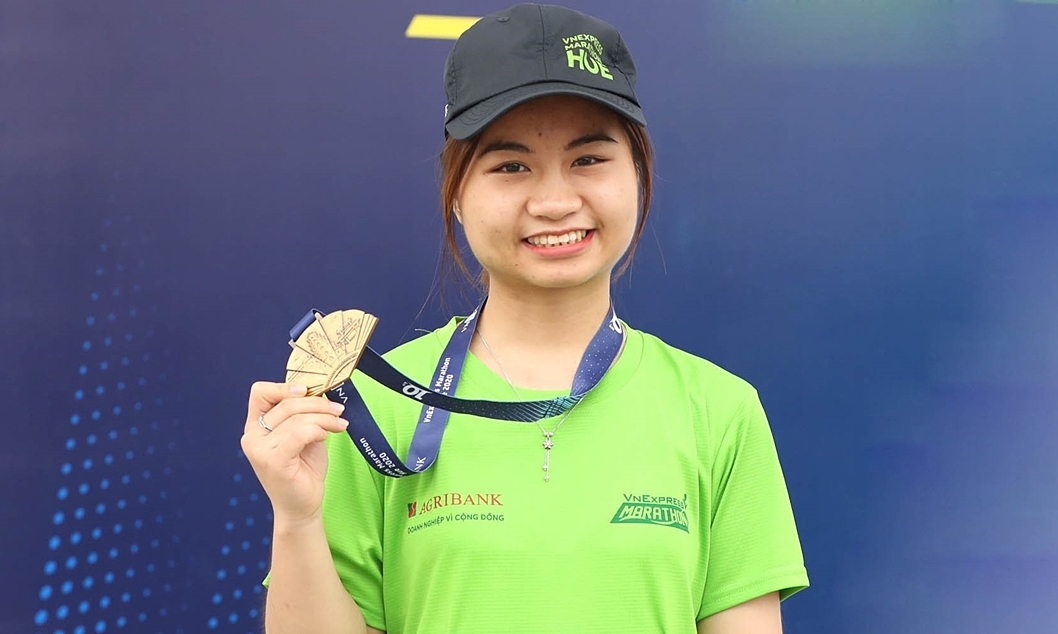 On the morning of December 27, as soon as he reached the 10 km distance, runner Pham Thien Ha jumped happily, crying and kissing the medal in the shape of a propeller. The 22-year-old girl said she would place a gift of achievement on her father’s altar as soon as she got home. At VnExpress Marathon Hue, Ha did not register any distance, but still participated in the group of athletes under the name of his father – martyrs, journalist Pham Van Huong, who finished after one hour, 41 minutes and 12 seconds.

The last-year student from University of Social Sciences and Humanities said that seven months ago, when VnExpress Marathon Hue started, her father registered a distance of 10 km and continuously practiced to conquer the first marathon in life.

“I want to fulfill my father’s last wish, so I decided to replace my father to run, even though I am not good at athleticism, I feel tired after taking a few steps,” Thien Ha said. Previously, on October 13, journalist Pham Van Huong and 12 members of the rescue mission for Rao Trang 3 hydropower plant were buried by soil and rock at the Forest Ranger Station 67. On October 16, the Prime Minister decided to reward Bang ” The Fatherland credits “13 martyrs, including journalist Pham Van Huong.

Before the race, Ha did not have time to practice because she had to worry about many things, from the funeral, working 49 days for her father, preparing all papers, surviving to encouraging her sister in grade 12 … Before the night Exam, she lost sleep, both worried and excited. After 3 o’clock, when the chicken was not yet crowing, Ha got up to prepare a race kit to the starting point VnExpress Marathon, and her sister cooked some simple dishes, lit incense to help her father to help her complete the race.

Conquering a distance of 10 km is not easy for an entry runner, not to mention Ha’s marathon experience is number 0. “During the run, I was breathless and unable to breathe, many times just wanted to give up. The medal my dad wanted to win, I told him to try harder. I don’t know how many times I called his name on the run, asking him to help my daughter. Luckily I finished 20 minutes ahead of time. “, Ha recounted. Her friends all cheered Ha enthusiastically when she knew she wanted to replace her father to complete the race. Her mother also supports the child’s decision.

After two and a half months since his father passed away, the lives of Ha and her sister have had many changes, shortcomings, sometimes disorientation. She is entering her final year of college, and her sister is in 12th grade, preparing to face tough college exams. Because she had to replace her father as the breadwinner and solve some side issues, she would like to reserve for a period, stop her graduation thesis to do half. Teachers and friends supported her with all procedures, continuously encouraged the Ha sisters over the past time.

“Dad has been busy all year collecting news with you guys. Sometimes, my sisters still think he is on business as usual, but when his 49 days are over, I am even more disappointed by knowing this house. from here, there will be no family breadwinner “, Ha said chokily.

Her parents divorced two years ago, and the Ha sisters lived with her father, and her mother still went back and forth to take care of and cook for two children. Thanks to her mother’s comforting side, Ha gradually overcame the most difficult period. However, she worries that her sister affects her psychology and affect the final exam. Ha said that he is economical and serious about everything.

“I hope to be able to graduate smoothly and my sister pass the university she dreams of. We will try to live as well as her father’s wishes”, Thien Ha added. After Tet, she will register to return to school, complete her thesis in half.

VnExpress Marathon Hue 2020 run by VnExpress coordinating with Thua Thien Hue Provincial People’s Committee to organize, with the desire to open a healthy playground for sports lovers, especially jogging. The tournament has 4 distances, the first distance of 42 km, from 4:50 minutes; 21 km distance starts at 5:30; distance 5 km from 5:50 minutes and last 10 km distance, at 6 o’clock. The total prize value is nearly one billion dong.