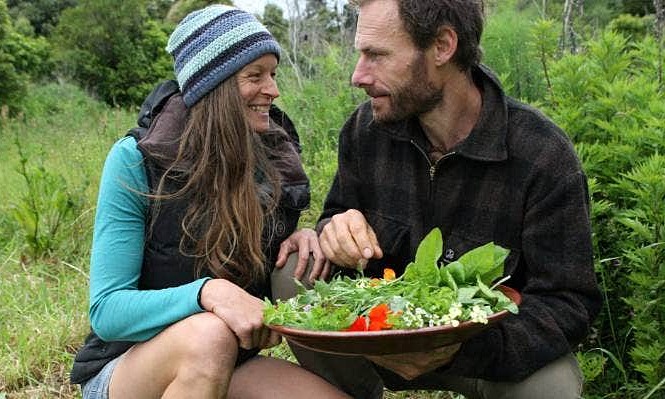 New ZealandAnnika Korsten and his wife in Golden Bay do not buy food, but hunt and gather food from the mountains and sea every day.

The couple Levi Harrison and Annika Korsten sleep in a shack on the edge of the forest, bathe in the river and use firewood to cook. They only eat 1-2 meals a day and spend 20 dollars a week on items including olive oil, spices, milk, cheese. The rest they hunted for food.

Their food is wild vegetables, wild fruits in the forest, mushrooms, clams, mussels, seaweed, goats, sometimes hares … said Harrison, the natural environment is full of delicious food. What we do is learn to be selective and to use them in everyday life.
“Wild vegetables have more nutrients than any vegetables bought in the supermarket. I feel this when I see that my body is cleaner and healthier,” said the 41-year-old man.

The couple lived as ‘prehistoric’.

For Levi Harrison and Annika Korsten, “wild life” not only exists in nature but also about growth. From an early age, Harrison has enjoyed creating fire. For 35 years in the present life, he began to return to a life close to nature, to cure his stomach illness. Before that, he used various diets to help relieve chronic stomach pain, including even experimenting with the stone age diet of the ancient people. “But I don’t feel comfortable because I cook with imported ingredients,” he said.

Harrison abandoned the outdated diet and began looking for foods that were edible in his natural surroundings. Since 2018, he officially left the modern life to live wild. The process is very simple, you only need a few tools, some bowls and chopsticks, some good clothes.

Harrison started out by adding wild plants and mushrooms to his diet, bathing in streams, learning to hunt with crossbows and creating fire .. His stomach aches disappeared and he felt strong. stronger, more energetic. “Two years ago I started hunting and quickly knew where and when there were good food,” he said.

A year later, Korsten joins Harrison into life. This German woman also suffered from intestinal disease for many years. She also sought a lifestyle that naturally healed the body.

Choose a wild lifestyle, but they still interact with the modern world. They have computers, phones. Korsten sells organic bread at the Saturday market. Harrison is a freelance voice actor. He has an income that he can donate to his children and the community.

The couple loves their lifestyle so much that they hold seminars that teach how to identify edible plants and fungi, and incorporate them into the modern diet. “Mother Nature gave us all. We don’t have to do anything,” said Harrison.

Bao Nhien (According to the Stuff)