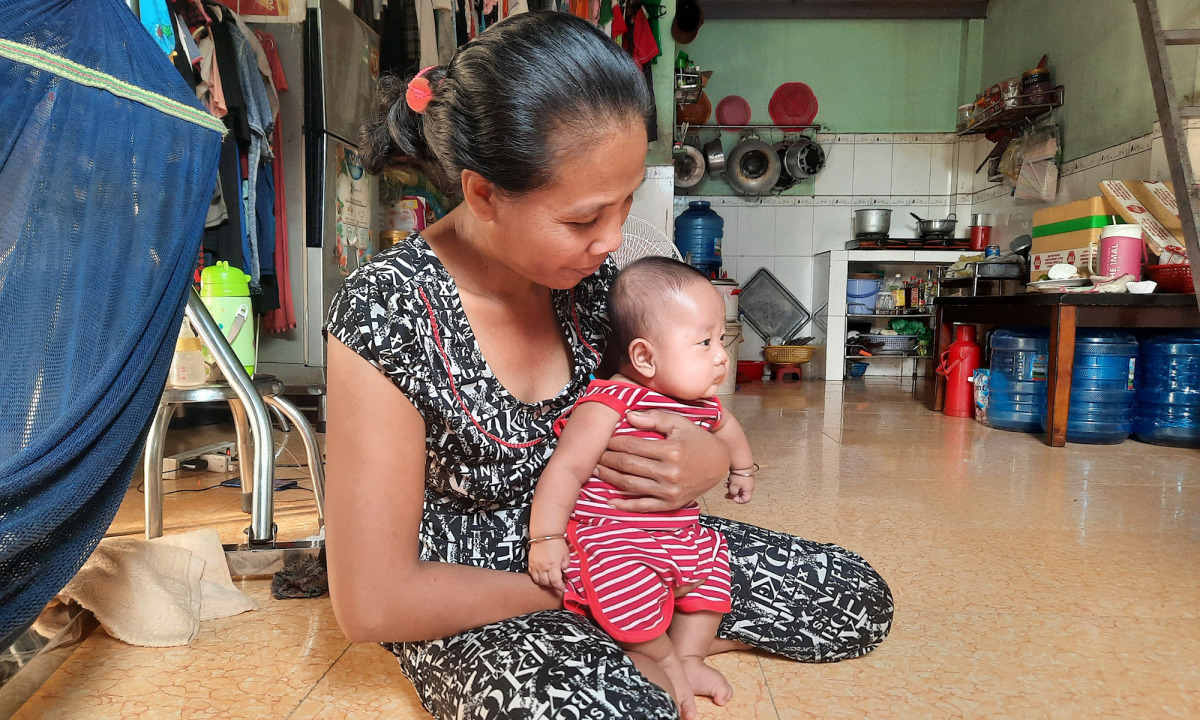 Ho Chi Minh CityFrom the moment he was born crying, boy Quoc Dam has never known the warmth of his mother. Covid-19 made her an orphan at the age of three days, while lying in an incubator.

Mrs. Dao Thi Dien put her clothes in the bowl, grabbed a towel and ran while wiping her hands, hurriedly carrying her grandchild. “Recently he’s been crying suddenly. I don’t know what to do,” she said.

Dam’s family, from Hon Dat district, Kien Giang province, has just moved to Saigon to start a business in March. Her father, Le Van Thai, 27 years old, applies for a job at an aluminum factory with a monthly salary of five million dong. Her mother asked for an assistant job at the stainless steel processing factory. The family lives with the wife’s parents, also employed, in an apartment that rents 2.5 million a month. Mr. Thai plans to save some capital and then study electrical engineering, looking forward to finding a job to take care of his children’s education in the future.

The storm of Covid-19 came to extinguish the plans of small families. On the night of August 30, Thai’s wife had trouble breathing. She was more than seven months pregnant, so everyone thought she was in early labor, and when she arrived at the hospital, she found out that she was infected with Covid-19. Because of the isolation conditions, Mr. Thai was forced to return. Before leaving, he entered his phone number for the hospital to contact, but later gave the phone to his wife.

The next morning the husband brought his wife’s clothes, but the hospital did not accept them. Calling the phone number his wife is holding only beeps. When he got home, his heart was as hot as a fire, but he could only wait and call the hospital hotline, but still no word from his wife.

On September 6, Mr. Thai asked a doctor in the hospital that his wife was “caesarean section” on August 31, the baby boy weighed 2.1 kg. The mother is only “a day or two away from the ventilator”.

The whole family thought that mother and daughter would come home soon. But when he was able to contact the hospital again on September 14, he learned that his wife had passed away three days ago. “She only had a suit on, a pair of flip-flops, a blanket in her hand, and was admitted to the hospital alone”, Mr. Thai remembers the last image of his wife.

On September 15, he went to the hospital to pick up his son. The father stooped, reaching out his trembling hands to receive the child from the doctor. The boy lay neatly in his father’s arms, light-headed.

The boy was named Quoc Dam by his mother to match the name of his eldest son Quoc Bao, with the wish that his family life would always be “secure”. “But Covid-19 took my wife away when she was 22 years old and made my son never have a mother,” choked the widower.

Back home, baby Dam was still fast asleep. I was passed from my father’s hand to my brother’s, then my grandmother’s, my grandfather’s. Before I could get used to the family, I had to go to my cousin’s house in Cu Chi, more than 20 km from home, to feed on milk on the advice of the doctor.

During the two weeks at his uncle’s house, the boy sucked well, but no one was able to hold him after feeding, so he often vomited milk up to his ears.. The city is still separated “whoever stays where he is”, the whole family sometimes feels helpless because they want to be with their children but can’t. Mrs. Dien called every day to look at her grandchild, there was no call without crying. And Mr. Thai can follow the car of the aluminum factory and visit his children twice.

After two weeks, Dam was picked up. Because her grandmother and father are inexperienced, every time she sees Dam crying, she gives milk to drink, or once an hour to drink. I drank so much that there was excess milk in my throat, wheezing, the whole family thought I had pneumonia. “It was not until I took my son to the hospital that I realized that I had not taken care of him for a long time,” said the father. Since then, they have followed the doctor’s instructions, giving the baby milk once every two hours.

Ms. Dien added, on the day her daughter gave birth to a big baby, at that time in the countryside, relatives on both sides of the family took turns at the hospital. If there is anything delicious, she will bring it back to her to cook it to benefit from milk. Having a bit of a mother’s breath, the second brother just needs to be full to sleep. Meanwhile, the boy Dam, because he was born prematurely, lacked his mother’s breath, so his health was poor, and he often cried and could not be comforted.

Every day, she doesn’t cry at night like many other babies, but is the most fussy around 4pm. The baby is fed and passed from one person to another to sleep, but every time he puts it in the crib, he wakes up and cries. One day, nearly 9pm, Dam was still sleeping hard, making the whole family feel like a struggle. “The saddest part is that I don’t have any memories of my mother later on,” she said.

For a week now, Dam has been stirring again in the morning. I love being carried by my grandmother in front of the door to watch the traffic go by. In particular, when his brother Quoc Bao called him with the nickname “duck beak” and kissed his cheek, Dam laughed louder, waving his arms and legs with excitement. “The boy is exactly like his mother, from the face, the skin of the honey cake and the toes of the same length. His head is a bit distorted, probably due to lying on one side a lot”, Mr. Thai said.

As soon as Saigon eased the distance, Mr. Thai went back to work. Grandma had to take time off work to take care of her grandchildren. Quoc Dam is still using colostrum, plus another type of milk powder, nearly 3 million dong a month, besides diapers, market, house… Recently, he works overtime every day until 9 pm, but the highest month he earns just over 7 million dong.

As of early October, Ho Chi Minh City Department of Labor, Invalids and Social Affairs recorded nearly 1,400 children under 18 orphans due to the pandemic. Dam is one in 19 babies who lose their mother at birth.

Now Dam is nearly 4 months old, weighs 6 kg. The boy began to prefer sleeping in a hammock to a cot. The hammock that my mother used to lie on in the past was torn in many places, but my grandfather tried to patch it up for the grandchild to lie on because he wanted “it’s a bit motherly”.

OLDThe New Year of Hope program of the Hope Fund – VnExpress newspaper is expected to give 1,500 gifts with the desire to share the loss with orphaned children because of Covid-19. Interested readers and businesses can support the program here.