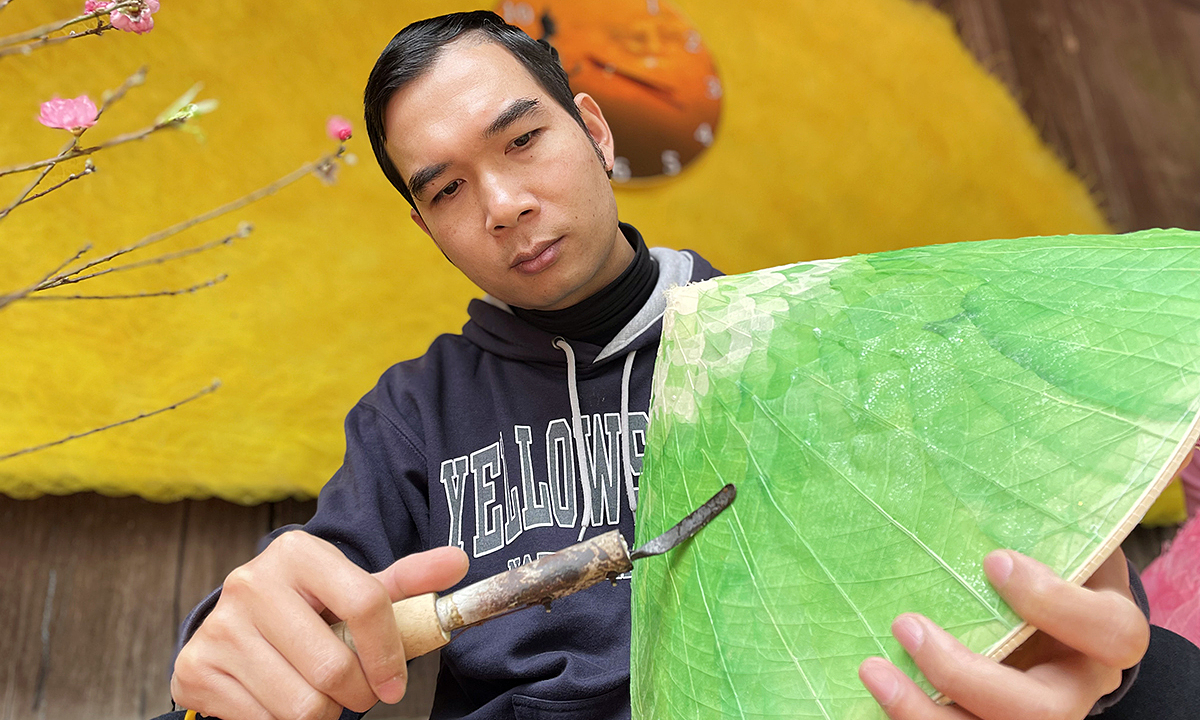 HanoiUnder the canopy of Bodhi tree, Kieu Cao Dung lifted the fallen leaf from his head, looked in the sun and discovered that the leaves were as yellow as a pomelo in Tet holiday without wilting or warping.

A boy from Dai Dong, Thach That district realized that the Bodhi leaf has a system of interlaced bones like a spider’s web, so it is strong and can create many different products.

“I think I will make a bodhi tree hat – a product that no one has made yet,” said Dung, 39, about the reason for the decision to start a business, mid-2021.

The conical hat has been a symbol of Vietnam for a long time with familiar materials from palm, bamboo, coconut, conical leaf and many people have created more creations such as lotus leaf conical hat, eagle leaf in Hue, conical hat. silk in Chuong village (Thanh Oai district). Cao Dung wants to contribute a new way to make hats, so that when it comes to the Bodhi leaf hat, it is associated with Hanoi.

With the experience of the first person in Vietnam to successfully make the immortal lotus, Dung applied it to the Bodhi leaf, but when sewing the hat, the product was clunky and heavy, if sold, no one would buy it. Dung knew it was necessary to separate the flesh of the leaves from the bones.

In the early days of May 2021, the whole country was almost frozen before the wave of the Covid-19 epidemic, Dung alone returned to the craft village of making Bodhi leaf paintings in Ninh Binh, learning how to separate leaves with lime water. But this method also did not satisfy him because it took 60 days.

He went to Hue, met the people who made conical hats from the forest to learn how to incubate with chlorine, which still took 60 days. Dung continued to Ho Chi Minh City to meet the immortal lotus maker based on the Japanese salt brewing technique.

Combining the techniques of his predecessors with knowledge learned from biochemistry experts, Dung shortened the time from 60 to 30 days, finally to only one day. However, with this method, he encountered a condition where the leaf bones were soft, unable to make cones. There are two basic components in the leaf bone, phosphorus and calcium. Dung has added calcium but still cannot produce a satisfactory leaf.

One night in June was too tiring, Dung decided to rest early. While listening to music, suddenly an idea flashed in his mind: Why does the leaf have a large backbone, wing bones, and membrane bones gradually getting smaller? If so, the same force would not be tolerated by the smaller bones. “I realized the mistake for a long time was to study the whole leaf. In fact, a leaf has at least three different parts,” Dung shared.

Waking up, he embarked on an experiment. At 5am the next morning, Dung had a leaf skeleton as desired.

With initial success, Kieu Cao Dung returned to Chuong village to find someone to stare at the Bodhi leaf hat for himself. Here for a week, he sought out the most skilled hat makers but all refused because no one thought the leaves could be sewn into hats.

Cao Dung continued to visit Phu My conical village, Quoc Oai district. Once again, the people who worked the longest here all refused. The boy was sad but not discouraged. Through an acquaintance, he was introduced to Mrs. Doan Thi Thai, 61 years old, with 56 years of experience.

Recalling the day Dung brought the Bodhi leaf file to her house, Mrs. Thai only knew that she had a new type of hat material, but did not believe it would be successful. She tried different ways of staring, still couldn’t come up with a hat that she liked. “Stop paying me, I can’t do it,” she said after three failed attempts.

Every time he holds the broken hat, his heart aches, Dung’s hand trembles, but his mouth still smiles and pleads: “We’ve already gone half way. I’ll try to help you again.”

Outsiders do not know that, to stare at a hat takes more than 500 bones, equivalent to two working days of Dung. To have money to pay workers, the master who studied abroad had to quit his job to trade grapefruit. He climbed trees to pick fruit by himself, day and night carrying pomelos from his hometown to his house in Long Bien to sell, hoping for more profit.

“But above all that hard work is the feeling of helplessness and confusion on the way I am going, because I am not a hat maker. Success or failure depends on others”, Dung shared.

Fourth attempt, a cone takes shape. Dung continued to suggest that the leaf spines should be arranged in a row and hidden just for the sake of aesthetics. In the end, the young man’s enthusiasm and the craftsman’s ingenuity created a new technique of making hats without revealing the stitches.

The hat has nine layers of leaves arranged from small to large, in which the top two layers are arranged in a spiral shape, making the cone hard, durable, and better than ordinary hats. Not satisfied, Dung continued to learn how to dye the bones of leaves, thereby creating lotus-like hats at different stages. When the bud is green or slightly pink, sometimes the lotus flower blooms brilliantly. In addition to the pink and white lotus hats, there are also yellow lotuses.

Having success with conical hats, the young man continued to use bodhi leaf bones to make lanterns, knitted fans and souvenir leaves from bodhi leaves.

Before pursuing crafts, Kieu Cao Dung was a hotel manager in Hanoi. For more than 15 years in the tourism industry, he knows that customers always have a need to buy souvenirs in the places they visit, but in fact most of the souvenirs are of mixed origin.

Fate made him become a student of Artisan Nguyen Ba Muu – who is known as the father of Vietnam’s dried flower industry. Passionate about the secret to making flowers and leaves immortal, Dung quit his job as a tourist. From his lessons, Dung spent three years researching to create products associated with his name, such as the immortal lotus flower, Dong Ho painting, Hang drum on lotus leaf… Now, a Once again, the Bodhi hat is associated with the name Kieu Cao Dung.

“Perhaps as a literature student, I always have the urge to assert my ego in society, so that once it turns to dust, I won’t be anonymous”, Dung confided about the motivation behind all of his creations. me.

Now, the young man in Hanoi hopes that his hat made from the leaves of a tree bearing Buddhist symbols will provide shade for Buddhists around the world in their spiritual journey, just like more than 2,600 years ago, Shakyamuni Buddha. The monk sat in meditation under the Bodhi tree, protected by the cool shade of the tree, and attained enlightenment.