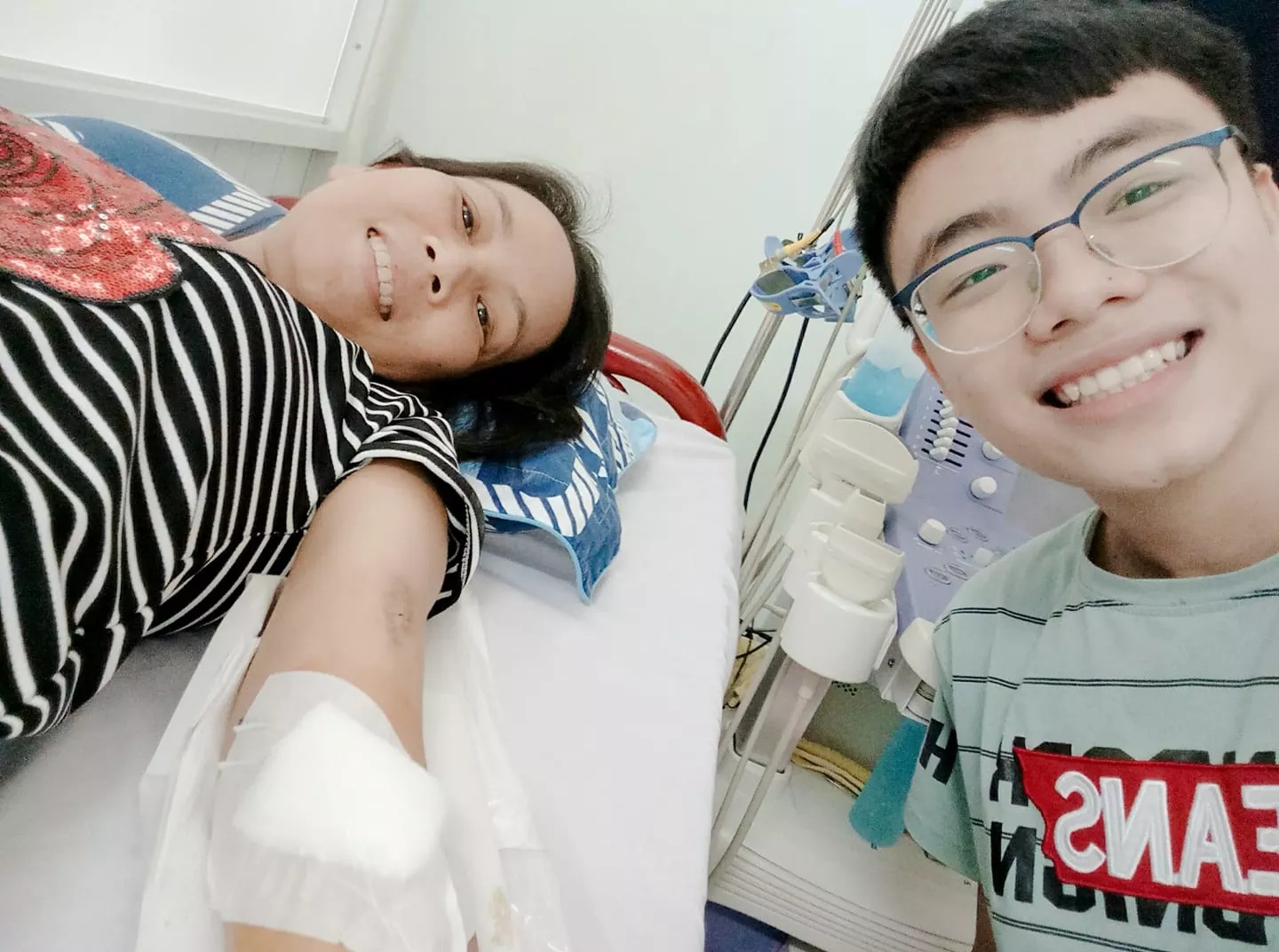 HCMC“Let me carry your mother once. All my life I have carried you …”, Minh Nhat sang the first sentences of the song “Ganh Mom” ​​on the stage of Trong Dong theater, District 1.

Below, hundreds of spectators clapped unceasingly cheered by the warm voice and affection of a 17-year-old boy. For those who already know Minh Nhat, those applause are encouragement, helping me to be more confident with the dream of “going to sing to earn money for a kidney transplant”.

“This is the fastest way for a child like me to make money. My mother has had kidney failure for 15 years. My dream is to become a doctor to cure her. But she is getting weaker. I’m afraid mom can’t wait, ”said Minh Nhat – famous contestant from the round Hide face contest “Vietnamese children’s vocals 2018”, confided.

Since the day the whole family left Binh Dinh for Saigon, Minh Nhat father ran to see, hug and deliver, but struggled all day to only a few hundred thousand. If I go to sing, just one song might be more than Dad’s workday.

Minh Nhat’s dream of a kidney transplant for his mother started in the 6th grade. Once a friend on dialysis of his mother at the hospital visited his home, the boy was surprised to see that this person was healthy, able to ride a motorbike by himself laughed happily while before that she was just as weak as her mother. When I asked out, my mother’s friend just got a kidney transplant. Since then, the hope of earning enough money for medical treatment for her mother rekindled in Minh Nhat’s heart.

Knowing the cost of a kidney transplant is up to a billion dong, he thinks about participating in many music competitions with the desire to receive an award. Before coming to Vietnamese Child Singing, I was a contestant in dozens of music competitions big and small.

Ms. Nguyen Thi Duc, 41 years old, Minh Nhat’s mother said that she and her husband are both teachers, the whole family has no art activities, but the son has a talent for singing. At the end of 2018, my parents brought me to Saigon to attend the Child Vietnamese Singing as well as to give her more in-depth examination. For more than 3 months, when Minh Nhat passed the exam one after another, his mother underwent surgery to remove a tumor due to complications after years of dialysis. Japan stopped before the semi-finals, her mother’s illness worsened, the whole family decided to stay in Saigon for long-term treatment for her mother.

Also from here, my father resigned from teaching and switched to running a motorbike taxi technology. As for Japan, outside of school hours, at night and on weekends, I do not refuse any invitation to sing to earn extra money to support her life and the cost of a kidney transplant for her mother.

In its shows, Japan always prioritizes the selection of songs written about her mother. But he never chose to sing the song Miss orphaned mother.

“I used to tell her that it was just a song anyway, don’t think about it wildly, but she definitely won’t sing that song”, Duc said.

Normally, Minh Nhat only receives 2-3 invitations to sing on weekends. But on special occasions like Mid-Autumn Festival, Children’s New Year or New Year, I go to sing more often. There was a rush day, one Sunday I had to run number three.

When there are tests in class, Japan often stays up late to study. At night with a singing schedule, the boy seemed exhausted, leaning against his father’s shoulder all the way. Upon arriving, the dizziness and dizziness made Japan seem unable to sing. “But when I go on stage, to the applause of the audience, and sing songs about my mother, I don’t feel tired anymore,” he said.

Minh Nhat is supported by many sponsors, sponsored vocal courses, learned musical instruments to improve his forte in singing. All of her performance costumes were donated.

“When I joined the Vietnamese Child Singing, I always thought that I would buy a pair of shoes that had discounted with the price of more than 800 thousand. Those were also the shoes I always wore for more than two years. give up “, said Nguyen Ngoc Thanh, 46 years old, father of Japan.

From the day he left the podium, he left his hometown and moved to Saigon to create a new life. Mr. Thanh – the father of Japan is familiar with the narrow living space in the house of more than 20m2 in Thanh Da apartment building, used to sudden rains and traffic jams. His wife’s dialysis schedule 3 times a week at the hospital, plus an evening job as a tutor, made him less time to support his children. All he could do for that boy was to take him to school, to venues in the city.

For Ms Duc, although she loves and wants to help her son with odd jobs such as laundry and ironing, she is not healthy enough to do. So, every time before the show, the boy would whirring to choose clothes and iron to wear. The boy also taught himself how to make up and match clothes and asked his mother to “browse” for help.

Being able to stand on stage, in addition to satisfying her passion for singing, for me, remuneration is also important. But for charitable shows, Minh Nhat refused to accept payment. The boy thought, from the day he entered Saigon, his family received a lot of help, so, if there was a chance to repay the favor, Minh Nhat would always be ready.

“This New Year’s Eve, after singing at Cancer Hospital, I went to the children’s rooms to give gifts. Seeing the children have to stay in the hospital for a long time, Tet cannot go back to the hometown, I remember my mother used to be.” So I love to sing for volunteer programs like this, “said the 17-year-old boy.

After 7pm, Japan was picked up by his father after finishing musical instrument lessons. Back in the small room, the dog Bong – the friend I brought in from his hometown happily ran out to welcome. Minh Nhat patted his head, and with his four-legged friend rushed to the hammock where his mother lay and kissed her on the cheek. I tell stories, make jokes for my mother to laugh, and prepare dinner with my father. While stirring the fragrant fried rice pan, Minh Nhat hummed a song: “Let me carry you, don’t be discouraged, Afraid of who is late when you die?“Then looked back at Mom and smiled.

“I still try to study well, go to college to have a stable career, but still sing. I have never given up on my dream of having money for my mother to have a kidney transplant, but my mother is getting weaker every day, I’m worried. Sometimes when I was studying at school, I suddenly startled thinking about my mother “, Minh Nhat opened his heart and sighed.