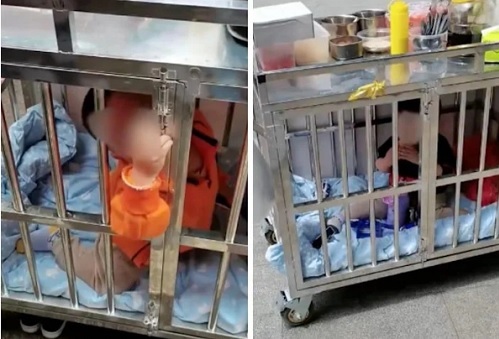 A 12-second video that appeared on social media in early June, of the boy, spurred a discussion in China about poor families’ child care choices. In the video, the child is seen sitting in a cage, occasionally reaching his arms out of the bars. The cage is clean, has blankets for mattresses and toys. The sign above shows the mother selling dessert jelly on the street for a living.

The woman said she felt bad for leaving her child like that. “But as bad as it is, it’s the only option. His father is heartless and just likes to play video games all day,” she said. Her family struggled to meet the most basic needs. Sometimes, the whole family fasts to have money to buy infant formula.

Many social media users sympathize with the woman when struggling with life, accepting to keep her child in a cage.

Others expressed that, no matter how poor, children should not be living in such conditions.

Parallel to that is the controversy about the lack of parties to support child care for the working poor. “It’s pitiful. Maybe we don’t have affordable child care facilities for the poor?”, one commented.

China is facing a demographic crisis. Many couples say one of the major obstacles to their unwillingness to have children is the lack of affordable child care options.

Usually, children when their parents go to work, they are sent to grandparents. But not every family has an elderly person to help.

The serious supply-demand gap means that tuition fees at childcare centers are expensive. The fee is beyond the reach of poor families like the mother whose child is locked in a cage.