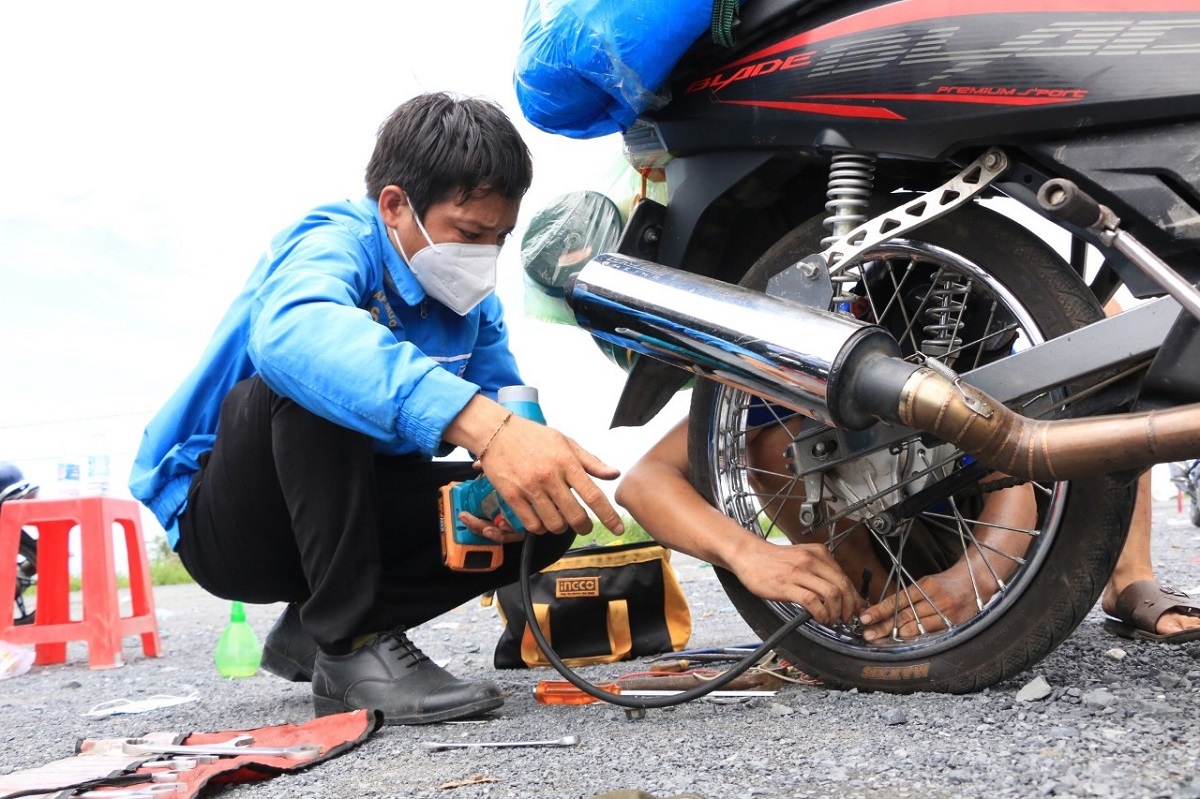 Dong ThapAt 10 o’clock at night, the hotline of the SOS Thap Muoi Rescue Team rang, Mr. Han and two friends from the headquarters of the team covered in raincoats, rushed to National Highway N2, 6km away.

Three flatbed cars were waiting to be repaired in the pouring rain. Huynh Van Hoai Han urged the delegation of more than 30 people to temporarily enter the quarantine checkpoint on N2 road, Thap Muoi district, to shelter from the rain. He and everyone in the group turned on the phone’s flashlight to help each other fix it. The water tore the thin raincoat, the three young men shivered from the cold. After almost an hour, they finished. At this time, the members of the Thap Muoi SOS team ran into the gate, clearly seeing the people they had just supported.

“In the group there were old people, a few children and pregnant women. Everyone’s hair was tangled because of dust mixed with rain water. They kept bowing their heads in thanks, making me both touched and happy”, Hat, 28 age, said.

He started his “career of carrying prisons and gross goods” from the Lunar New Year, by inviting his close friends to buy water and bread from his own pocket, go to the N2 highway, the gateway to Dong Thap, and give workers from the provinces. province to return home to avoid the epidemic.

Seeing that many people had broken cars along the way, Han’s group discussed setting up a car repair team to help. “In the past, when I went to school in Saigon, I used to ride my motorbike back to my hometown, my car broke down all the time, so I understand their feelings,” he said. One member of the auto repair team should supplement the rest. In February, Thap Muoi SOS Rescue Team, led by Han as the captain, was born, operating from 8 pm – 0 pm daily.

In early October, when the provinces began to remove the distance, many people stuck in big cities rode motorbikes to their hometown, the team operated 24/24. “Now there are 18 brothers, including two professional car mechanics, divided into four shifts,” said Han. Up to now, the group has supported more than 800 cases of vehicle breakdown along the way.

Tran Thi Ngan, 22 years old, a worker in Long An is one of them. Stranded for more than two months in a motel room, she rode her motorbike alone to her hometown in Dong Thap. Plunging into a pothole, Ngan’s car rattled and stopped. The young girl struggled to lead her to the quarantine checkpoint for help, but was given the hotline number of the Thap Muoi SOS Rescue Team by the traffic police.

Like hundreds of people who returned to their hometown to avoid the epidemic, in addition to helping to repair cars, Ngan was given gasoline, bread and drinking water by the team. “Everybody goes in groups, there’s nothing to support each other, and I’m alone, I don’t know without you guys,” she said, October 8.

In order to have funds to help people like Ngan, the members of the SOS rescue team initially asked relatives and friends for money support. When the groups of people returned to their hometowns were larger, the team mobilized more sponsors to sponsor more tubes, tires, petrol or other kind of artifacts, rather than receiving cash.

Mr. Ho Van Tai, Deputy Secretary of Doan Thap Muoi district, said he used to go with H’s team to learn how it works. “They were dedicated and polite when supporting people and did not manage day and night. When Dong Thap was isolated and people did not travel, they were on duty at the epidemic control checkpoints”, Mr. Tai said.

During the time of supporting people in difficulty, Ho Van Hoai Han “found the meaning of his life”. He chose to follow the farming profession of his parents, to stay close to home, maintain team activities, for the rest of his life.