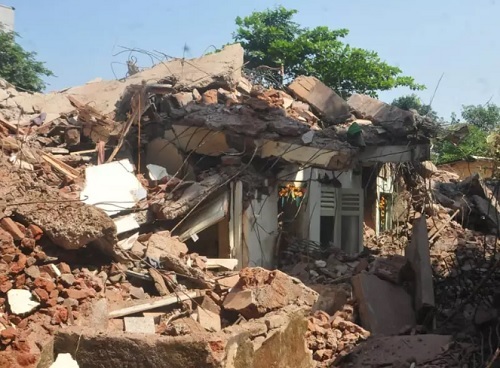 IndiaKunal Mohite, 18, used to surf the web in the afternoon and go to bed, but the night before the building he lived in collapsed, he could not sleep.

Insomnia, four o’clock in the morning on October 29, Mohite, in the Kopar district, Dombivli, Mumbai, watched a series. Suddenly, part of the kitchen tile fell. Mohite stood up to observe and discovered a serious imminent incident. He shouted to awaken the whole family. They chanted for all 75 people in the building to flee. Just five minutes later, the whole building was in ruins.

“I only watch movies until two in the afternoon, but for some reason I lose sleep that night,” said Mohite.

This 42-year-old, three-story building has 5 households on each floor, for a total of 75 people living.

According to local authorities, the building was warned of danger and required an evacuation nine months earlier. However, due to economic difficulties, households still linger for fear of losing their renting rights. After the incident, the owner of the building moved residents to another area at a public dormitory or at a relative’s home.

Last month, 38 people were killed when the 45-year-old Jilani building in Bhiwandi collapsed into rubble.

The story of the boy accidentally saving 75 lives quickly went viral on social networks. Many people call Mohite “hero”, praying for good things to happen to him.

Others joked that since reading this news, many parents won’t scold if their kids stay up at night watching the movie. “Who knows, those kids could save dozens of people from being crushed in a building collapse,” he said happily.

Intelligent Update (According to the TheTimeOfIndia / midday)