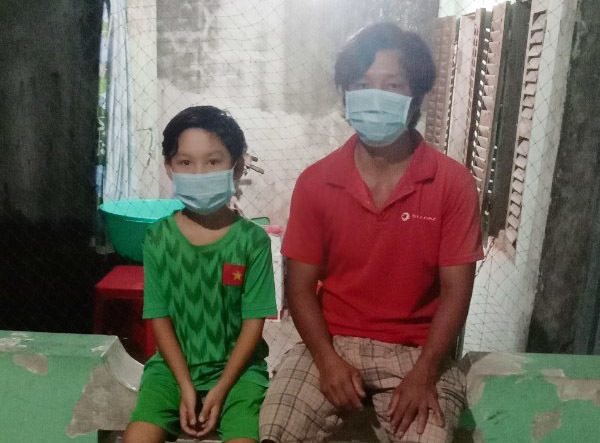 Bac LieuCarrying purulent pericardial and pulmonary disease, Dang Khoi, 10 years old, still insisted on returning, not having surgery because he was afraid that “our family would have to repay the debt”.

Unable to convince his son in every way, Mr. Nguyen Van Tet, 36 years old, had to ask for help from the doctors, asking everyone to lie so that the boy would go to the operating table.

“The doctor told the boy that there was a benefactor to finance the operation. Many aunts and uncles in the ward also contributed to reassure him, and the boy agreed,” said Mr. Tate.

It has been more than a month, until now, the face of the man living in Vinh Phu Tay commune, Phuoc Long district is still bewildered because the fatal disease hit his son’s head so suddenly. At midnight on December 15, 2021, the boy Nguyen Dang Khoi hugged his chest and went downstairs to call his father, saying that he couldn’t breathe. Mr. Tit hurriedly took his son to Phuoc Long district hospital, which was nearly 10 km away from home. Arriving at the place it was almost 2 am, the doctor diagnosed Khoi with calcium deficiency, followed up until morning, then let him go home.

But the next night, the boy still did not get better, but also tended to get worse, not only had difficulty breathing, his body began to turn purple, the left chest area was swollen. Mr. Tet took his son to the hospital in Bac Lieu province. At 3 am, his father and son came to the hospital. The doctor diagnosed Khoi with pleural effusion and pulmonary edema and needed to be transferred to Children’s Hospital 1 in Saigon urgently.

Hearing the news that he had to go to Saigon, the father was startled, took out all the money in his pocket, counted 1.4 million VND, and stammered asked the doctor: “How much more money do you need?”. The doctor replied, at least more than 10 million. Mr. Tet only had to call his wife to ask to borrow money to bring up the money. In the early morning of December 17, Ms. Dep, 31 years old, his wife knocked on the door of all the neighbors’ houses for nearly 13 million, then grabbed a few clothes and rushed to the hospital to take her husband.

While sitting in the ambulance, Mr. Tet remembered that this was the second time he was allowed to go to Saigon, but ironically, both times had the destination of the hospital. He had otitis media since childhood but did not have money for definitive treatment, so 5 years ago, the disease got worse and had to go to the city for surgery.

That time, he was deaf in one ear, often had headaches, and could not do heavy work. Having no land, he and his wife work as housekeepers to raise three children. The house his family has been living in for nearly 10 years now also thanks to benefactors for financial support.

Bad health, in a month, he can only work a few days. For half a year, because of the Covid epidemic, he and his wife have almost no income. At the beginning of this new school year, because there is no money to pay tuition, the first daughter, who is about to enter 6th grade, has to drop out of school.

“My family doesn’t even have millions of money on weekdays, let alone tens of millions of dollars, but I have to take my children away. Child life is the most important, debt is to be worked and paid,” he said, even though he still knew that phrase to motivate himself. I am main.

Going to Saigon, 13 million in loan fees, after paying for the car and money for Covid-19 testing, his father and son only had nearly 5 million left.

Just admitted to the hospital, Khoi was given oxygen by the doctor and taken to the emergency room. Outside, Mr. Tet heard that he had to pay an advance for hospital fees and the cost of surgery could be more than tens of millions of dong. Looking at the father’s confused look, a doctor inquired and said that he only needed to pay 2 million dong temporarily, the hospital would ask for help from benefactors.

“I heard that Saigon has many philanthropists or help people in need, I didn’t expect it to be true,” said Mr. Tet, emotional.

While the father was relieved because the burden was temporarily relieved, the boy Khoi refused to undergo surgery because he knew that his parents had to borrow money. During the two days before the operation, Khoi insisted on going home, until the doctor reassured him that he was ready to go to the operating table.

The surgery was successful, Khoi’s health was stable in the first two days. On the third day, he suddenly clutched his head and shouted, struggling to pull off the water line, the oxygen tube. Mr. Tet ran to call the doctor. Standing from afar, watching his son struggle while four doctors struggled with the boy for emergency treatment, the poor man leaned against the wall and crouched down. “At that time, I didn’t know anything, I thought my child could leave me because the doctor said the overflowing pus prevented the heart from beating,” Mr. Tet said.

Thirty minutes later, Khoi lay still and passed out with a sweaty shirt. The father’s shirt was also soaked.

Khoi stayed in the hospital for nearly a month. During the hospital stay, every time he saw his father going to buy rice, the boy would say: “Why do you buy so much, we’ll pay the debt when we go home”. Seeing the boy understand the story, many parents sharing the room could not help but be moved. Sometimes people give cakes, milk cartons.

“I see a lot of people suffering, their children are sicker than mine, but they are still encouraging. Thanks to that, the boy’s spirit is more comfortable, he doesn’t worry as much as at first,” said Tet.

After taking care of the children for more than half a month, Tet called his wife to go to Saigon instead because every day of unemployment, his heart burned, thinking about more than 10 million VND borrowed the day he went to Saigon. He wants to go back to his hometown to find a job.

The epidemic is still complicated, there has not been any construction work for him to apply for as an assistant. Every few days, he was called by the people in the hamlet to work in the fields, earning 250,000 VND per day. “If it’s my wife, I’ll only be paid 200,000”, Mr. Tet explained.

Khoi’s mother and daughter stayed in the hospital for another week before being discharged. On the return day, Mr. Tet kept calling, telling his wife and children to find doctors, benefactors and especially parents sharing a room to thank. That day, everyone in the room collected 500,000 VND, enough for mother and daughter to buy bus tickets to their hometown.

“My family is lucky because going to Saigon is helped by many people, otherwise I would only have a miserable country,” said Tet.

However, until now, he still does not know how to repay the debt of more than 10 million VND borrowed.