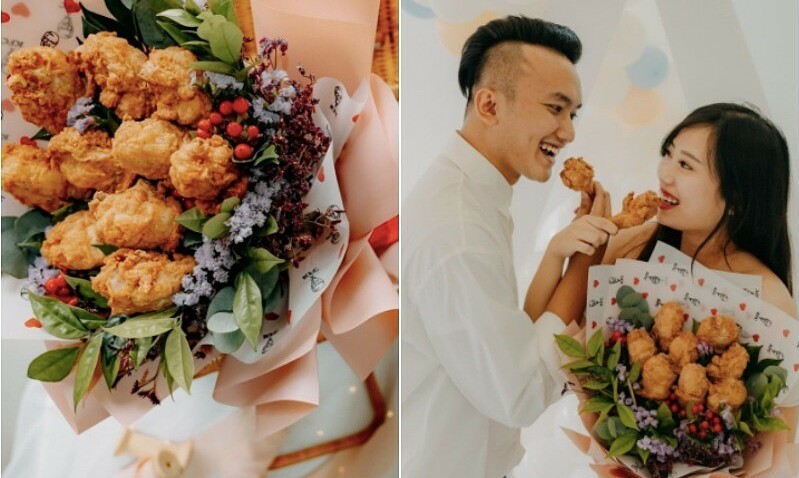 Special occasions such as Valentine’s Day, anniversaries, proposals … people often give partners a bouquet of fresh flowers, but a young Singaporean gave his girlfriend a “bunch of fried chicken”.

Darren Chua and Koh Han Yan – both 27 years old – have met in middle school and have been in love for about 10 years. Like every other couple, Darren and Han Yan share common interests and passions and one of them is KFC. Han Yan herself loves this fast-food brand so much that she has tried all of its dishes.

So, when Darren decided to propose to his girlfriend, he came up with the idea of ​​giving her a bunch of fried chicken, instead of a bouquet.

At first, Darren thinks about making it yourself, or buying chicken drumsticks and getting help from the florist. However, after some consideration, he decided to ask KFC for help.

In an interview with Youthopia, Darren revealed: “KFC does not sell chicken bouquets, so I managed to get that special bouquet. I tried to write to KFC. Surprisingly they were very happy. help me “.

On the big day, Darren knelt to propose to his girlfriend with a ring, and of course accompanied by a bunch of golden brown fried chicken beautifully wrapped – just like a bouquet of flowers.

In this special proposal, Darren said that his girlfriend always wished to marry the grandson of the host KFC. Darren joked that even though he didn’t have the KFC brand owner’s bloodline as the girl wished for, he would still try his best to satisfy all her needs and wants.

Meanwhile, the fast food chain congratulated the couple on their social media platforms, emphasizing that “this is one of the sweetest requests we’ve received”.

Thuy Linh (According to Asianone)