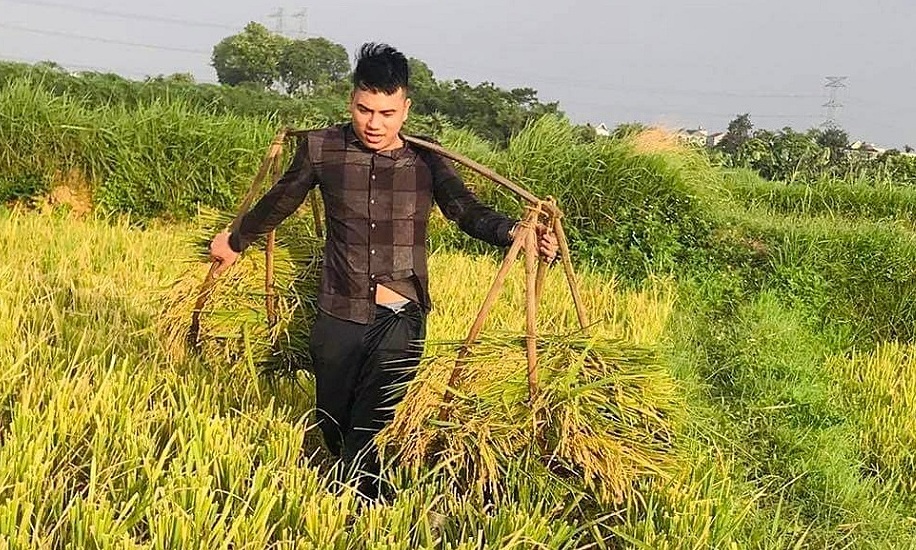 Thai NguyenLooking at her son-in-law drenched in sweat, wading through the rice fields, Mrs. Cao Thi Thuy smiled, recalling the day her daughter brought this tattooed boy home to debut, 2018.

At that time, Ngo Ha, 27 years old, was four months pregnant, but knowing that her lover had tattoos on her chest and arms, Ms. Thuy was very skeptical. The mother claimed to only allow the marriage when the man named Manh Tuan tested to prove that he was not addicted to drugs.

“I gave birth to adoptive parents, but I don’t accept that I can marry a drug addict,” Mrs. Thuy, 45 years old in Hiep Hoa, Bac Giang definitely told her daughter. Silently asking an acquaintance in Thai Nguyen to investigate, she knew that the future groom had a bad past, and she was more worried.

Manh Tuan, a boy from Thai Nguyen, was a bit moved, but he followed his mother’s will. During the days at Ha’s house, he went to the kitchen to cook, help arrange firewood, sweep the house… “It was very pleasing to the eye, everything was done”, Mrs. Thuy recalled. When the test results showed that he was healthy, Manh became the son-in-law of Bac Giang, although his wife’s parents were not really satisfied.

“I understand why people don’t like me. Even I thought I was a bad man, how can I ask people to love me right away,” Tuan said.

Manh Tuan grew up in Thai Nguyen City with his father’s drug addiction. When his father died, his mother and son were shunned by the people around them, had to take each other to their grandmother’s house to live. The mother works as a garbage collector to raise three children. Studying to grade 9, Tuan had to quit school to join the coal team, carry hired goods at the border, drive agricultural workers, loaders… to make a living. In 2011, he got married, had a daughter, but the first marriage ended quickly.

Broken marriage and months of adventuring to earn a living made the boy unruly and careless.

In 2016, Manh Tuan happened to meet Ha, a beautiful medical college girl. He came to talk to her, but the girl only replied shyly and avoided her. Knowing that he is not worthy and a not-so-good past, the guy only dares to follow her silently on social networks.

Half a year later, the two meet again. Having the opportunity to talk more, Ha finds Manh Tuan funny, approachable, different from his sassy appearance. And the guy officially “planted si” in the girl’s room, looking for ways to approach.

Once, when Ha finished his apprenticeship at a hospital in Thai Nguyen, at 3 o’clock in the winter night, Manh Tuan dressed in tight clothes and volunteered to drive 50 km to pick him up. He helped Ha packed up his things and took him home. Ha was a little moved by the boy’s enthusiasm and determination, but listening to a friend tell about his past, she was still afraid.

In early 2017, Ha’s grandfather was treated at K Central Hospital. In the harvest season, the family was busy, so the girl changed her relatives to Hanoi to take care. Knowing the news, Manh Tuan rode a motorbike from Thai Nguyen, bought milk to visit and then returned. A few days later, he rented a motel near the hospital gate and stayed to help Ha take care of him. Daughter’s strength, having to rush around the hospital, now someone shares, the girl reluctantly accepts help.

For a month in a row, every 7 am, Manh Tuan went to the hospital from the motel to go with Ha to buy hot water, buy porridge, take him to the doctor and do all kinds of unnamed jobs to take care of the sick. He lied at an acquaintance’s house so that his girlfriend wouldn’t mind. Many times, because of urgent business, in the evening he rode his motorbike to Thai Nguyen and then returned to Hanoi in the night to meet Ha in the morning. Until one day, seeing that the hospital guard had a crush on the person he loved, Manh Tuan immediately “marked his sovereignty”. He pulled her hand, invited her to buy things, buy porridge… proved to be a couple.

Uncle Ha witnessed Manh Tuan’s enthusiasm and was also “moved by” telling her granddaughter that “it’s normal to have tattoos nowadays, it’s important to know how to love and respect yourself”.

“Because of what he showed, I agreed to accept love,” Ha said.

However, she still hid her parents, lied to Thai Nguyen to work to be with her lover. The two of them worked together to prepare for the wedding.

Married by his grandmother’s family, Manh Tuan is still afraid of tattoos that will bother his wife’s parents. In the middle of summer, it was sunny like fire. When he returned home, his wife did all the farm work. Tuan did not dare to wear a T-shirt.

“It wasn’t until once when I went to the well to make chicken, it was too hot, I took off my shirt, just in time for my father-in-law to return. Seeing that my parents still kept a normal attitude, I knew that my grandparents knew about my tattoo for a long time. Since then, I have dared to wear a blazer,” he said with a smile. Returning to his grandmother’s house, he went to the market to cook rice, pumped water or planted peanuts, threw seeds, carried fertilizer with his grandparents, and carried rice with his parents-in-law. From the day he got married until now, every harvest Manh Tuan rides a motorbike to help his wife’s family.

“Once on March 8, he drove from Thai Nguyen, bought a bouquet of roses for me. The important thing is that the son-in-law loves and pampers his wife and children. As a mother, I am also assured,” Ms. Thuy said. The mother admitted that, even though she knew she was not wrong, she still felt a little guilty about forcing her son-in-law to take a test.

Sometimes Manh Tuan and his wife listen to neighbors talking behind their backs, “clearly the prettiest in the village, studying well, but marrying a bad guy”. Once the couple went home, the child was sick, Ha told her husband to go buy a cylinder to pump medicine, but the pharmacy told them to run out. The wife asked her brother to buy the same goods. “Perhaps people think he has tattoos and buys cylinders to inject drugs,” Manh Tuan smiled sadly.

Knowing her husband’s heartbreak, Ha always told him: “The more people despise me, the more efforts I have to prove to them that they are wrong”. She also affirmed that it doesn’t matter form, family background, just need her husband to respect and love her. The encouragement of the wife and the birth of the child helps the husband to work harder and live more calmly.

“Now everyone praises Tuan for his willingness to do business, saying that he did not expect it to change so much. Seeing the children happy, knowing how to take care of the family’s economy, I am satisfied,” said Mrs. Nguyen Thi Hien, 56 years old, his mother. , speak.

He no longer gathers friends if his wife doesn’t go with him, doesn’t play cards with the neighbors like before. Listening to his wife’s suggestions, Anh Tuan bought gifts for his birth mother on birthdays, New Year’s holidays, and paid more attention to his stepdaughter.

He asked his mother to borrow money to open a grocery store. The outbreak of Covid caused the couple to owe more than 300 million VND. At first, Ha was angry with her husband and scolded her children. But when she calmed down, she encouraged him “lost money can be earned back, if you don’t try, you can’t know how much you can do”.

Then they squeeze a little bit, looking for ways to improve their income. Manh Tuan and his friends sell goods on foreign e-commerce floors, and his wife sells goods online. To date, they have a four-year-old daughter and a healthy nearly two-year-old son, “just like his father.” Both believe, love and determination will help them have a brighter life.

“He has never stopped caring and pampering me. So having two children, I still feel very young. I am lucky to marry a person who, although somewhat sassy in appearance, has a warm heart.” Ngo Ha laughed.