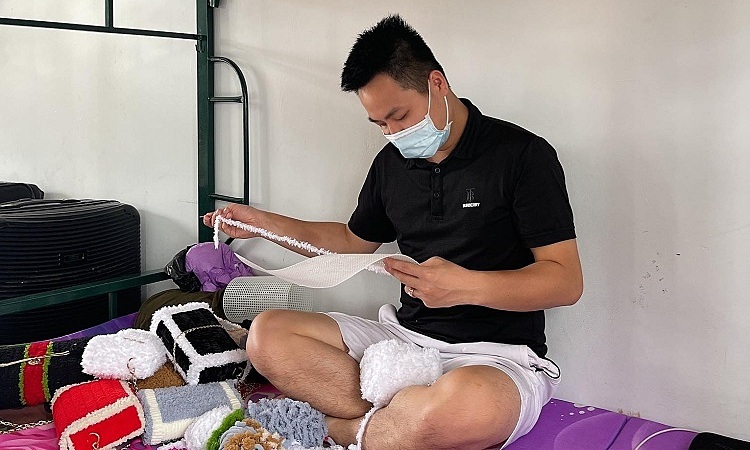 Khanh HoaWaking up, seeing in Le Thanh Do’s bed hanging bags, the people in the same room wondered: “Why do you use women’s clothes?” Do said: “I knit myself”.

Twenty-three roommates took turns to see the debut of a 28-year-old boy from Phu Tho. “No wonder he’s been hanging out and pulling in some wool until now,” one roommate said through his mask. Some elderly people play video calls to their wives, boasting: “Bought bag from Germany, do you feel beautiful?” Seeing the wife’s interest, they ordered wool and accessories and asked Do to help them. The man from Phu Tho province and those who were also isolated from Germany returned to Vietnam on a VN30 flight on January 28.

As a rule, every entry must be isolated for 14 days at the 803 Infantry Regiment (Ninh Hoa, Khanh Hoa), which means that on the 30th of Tet, they can reunite with their families.

But two days later, the paramedics called in the name of a person in the room, asking for separate isolation. This person was positive for Covid-19, but did not report. That means all roommates will have to count quarantine starting January 30.

“Everyone in the room is angry because of a cheating person that affects the whole team. It is not easy to return to Vietnam in the midst of a European blockade. You must send a letter to the embassy, ​​wait a long time. Luckily, it was reviewed among hundreds of thousands of people, “said Chengdu.

The plan was turned upside down, just eating, sleeping, and exercising, which made the young man more troubled. By chance watching a video teaching how to knit a wool handbag on social networks, Do watched curiously. The man with two years of experience in the nail salon industry believes he can also make such bags. He decided to ask the order officer for help.

The day he started to knit the bag, the young man hugged his laptop while working while watching the instructional video. After a morning of knitting in and unraveling, Do finished a distorted bag with uneven yarns. “The hardest part is stitching the joints into a complete bag,” he said.

The first few days, busy knitting, roommate brought lunch to put at the table, Chengdu forgot to eat. In the afternoon, the rice was cold, he brought out instant noodles to eat.

Do bed is placed at the top of the room, so he sees him weaving and knitting, everyone joking. The whole room’s chat group is full of pictures and videos of this young man knitting pockets. “But the next day, seeing the perfect bags, the uncle and brothers in the room praised their beauty,” Do said happily. He plans to give it to his friend on March 8. As planned, Do knitting more bags to give medical staff to celebrate the isolation days.

Every time he “entered the camp”, Do was very impressed with the medical staff and staff in the isolation ward. In this second time, when the moment of changing the old year and the new year is coming, more and more things make him feel more personal.

“The medical staff said that if there are no positive patients, they will be able to pick up New Year’s Eve with the family. But because we stay, you also have to stay. After listening, my heart sank.” Do said. At first, he and the others in the room were just frustrated by the feeling of missing the New Year’s Eve, forgetting the medical staff too.

The weather in Ninh Hoa is hot these days, but two medical staff must always wear sealed protective gear. Twice a day, they climbed two floors of stairs, took their temperature, and checked the health of nearly 200 people. You guys sweat soaked. But when Do heard that he was allergic, the next morning, they brought the medicine right away.

In addition to gifts for medical staff, in recent days, many uncles and sisters in the quarantine area asked Chengdu to help knit bags. “When we got back home, the whole of Europe blocked off, except for clothes, we couldn’t bring any gifts. So seeing that Do’s bags are beautiful, I also asked him to help knit some”, Mr. Ha Quoc Vuong, 39 age, Ninh Binh hometown said. As soon as he received the gifts from Chengdu, Mr. Wang “wrapped it carefully because it was revealed that someone had won it”.

On the morning of the 29th Tet, Le Thanh Do and members of the room anxiously waited for the medical staff to come and take their temperature. By the way, he will give his own woven bag and the gift of the whole room to military medical doctors.

“Not everyone takes advantage of the time of isolation as meaningfully as Do. He’s not only hard-working, skillful, but also compassionate and good-willed. Receiving a meaningful gift from the citizen, we know very well. Thank you and have the motivation to continue working, “said Dr. Le Minh Ngoc, in charge of health care for 24 people in the Thanh Do room.

See also the bags made by Chengdu.