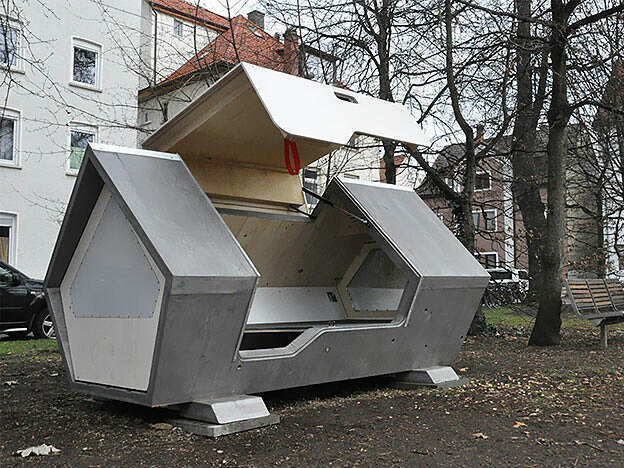 The “nests” sleep called Ulmer Nest are made from wood and metal to resist wind, waterproof, and easy to clean. People do not need a key to use but the “nests” are only allowed to use after 18:00.

Each sleeping “nest” can accommodate two people and a pet. They are designed for homeless people who do not want to go to traditional social houses for psychological reasons or to have dogs and cats. Usually, social homes for the homeless have regulations on gender, age, and animal bans.

The sleeping “nests” are not equipped with cameras, but are equipped with motion sensors, allowing social workers to know when there is a user. The next morning, the social worker will come to the “nest”, support the homeless if they need it, then clean it up. Thus, these “nests” do not disturb the homeless’s living habits but still help them feel like they are interested in society.

The design team noted that the assembled sleeping “nest” does not replace housing, but is only an emergency solution to prevent homeless people from freezing. Besides, “nest” sleep is also not suitable for people with disabilities or with fear of narrow spaces.

The sleep “nest” project, launched in 2018 at the request of the Ulm city government, is still in the testing phase. The design team hopes that after completion and replication, these “nests” will help save many lives.

Thu Nguyet (According to the Input)