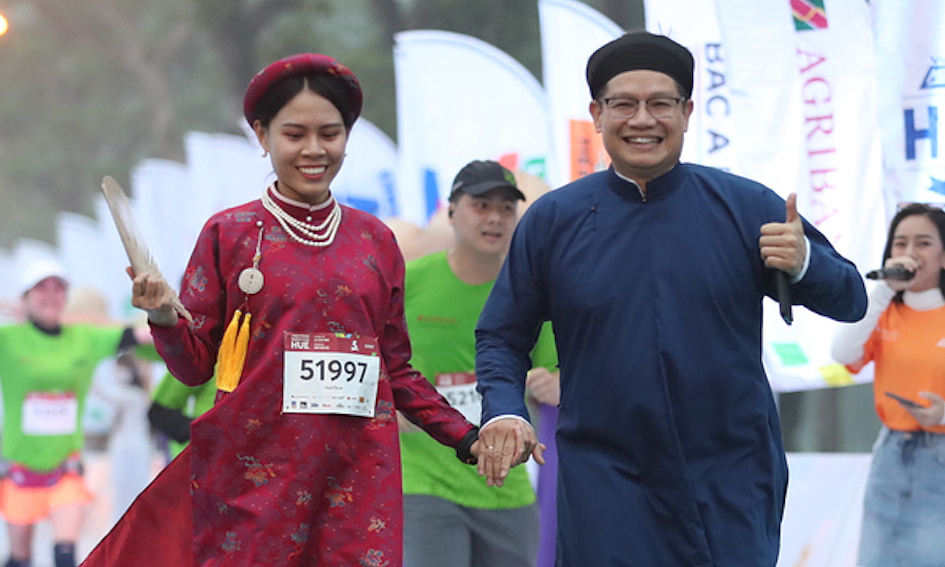 The costume was chosen by many athletes with the desire to promote the culture and people of Hue.

The five-bodied ao dai was born in the Nguyen dynasty and became the traditional costume of the aristocracy and knowledge. The national dress was stitched together from five pieces of fabric, so it was called five bodies or five bodies, different from today’s ao dai.

Mr. Phan Thanh Hai (dark green ao dai), Director of the Department of Culture, Sports and Tourism of Thua Thien – Hue province is the initiator of the movement to wear national clothing over the years. He said this outfit is easy to wear, can be used in all daily activities.

Ms. Ngan Han (red ao dai) from Hue also shared her desire to promote the image of the traditional five-body ao dai to the national runner community. “In a poetic scene in the ancient capital, the five-body Ao Dai will adorn the rustic and ancient features,” she said.

Both attracted the attention of the runner and the audience by recreating the image of Hue culture and people on the run.

Particularly fond of traditional Vietnamese costumes, singer Duc Tuan runs 21 km with this suit. He wanted to honor the national spirit and prove that in a comfortable situation, the five-body ao dai was still suitable.

In the photo is Mr. Phan Gia Tien, lecturer at Hue Industrial College. He and a friend in ao dai run 42 km.

Runner Le Trong Nghia carries a fan and does not forget to pose when he sees the camera lens. He reached a distance of 42 km after 4 hours 14 minutes.

Ms. Truong Thi Kim Anh ran 10 km and waited for her friend to join the 21 km at the finish line. Traditional five-body Ao Dai helps two female runners stand out with a bright smile on their lips.

Another female athlete loves the purple national outfit. “People often think the suit is very entangled and takes a long time to prepare but it is very easy to wear in fact,” she shared.