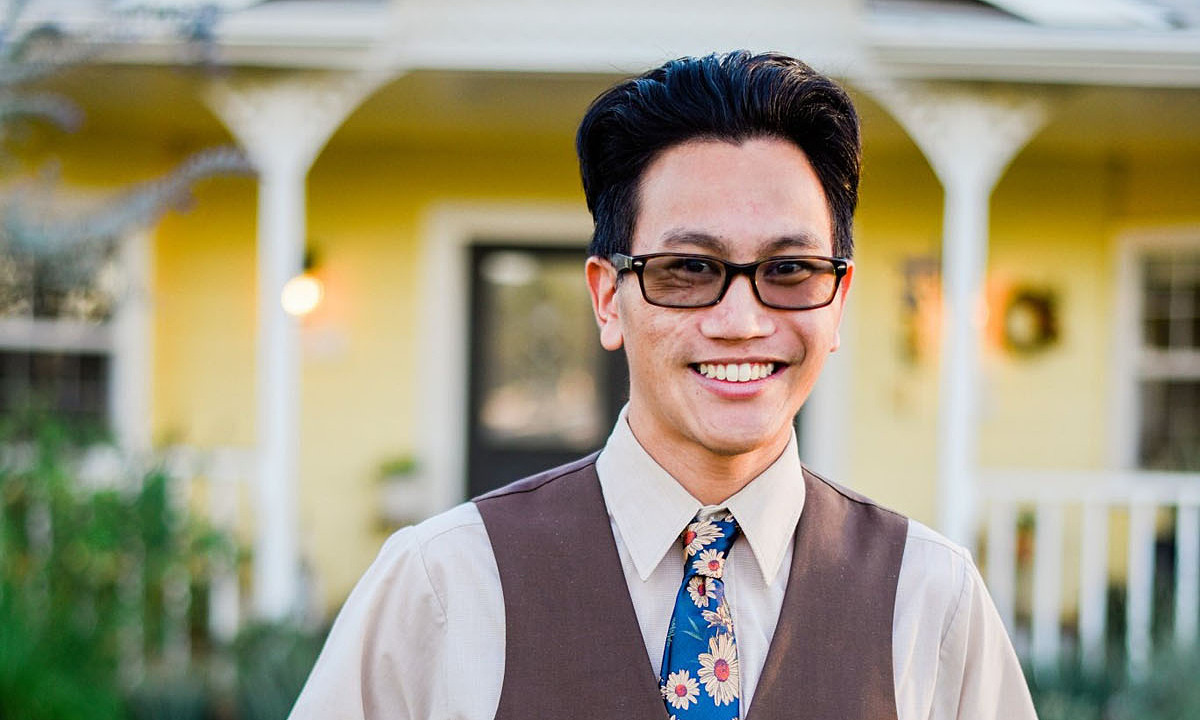 AmericaNearly 17 years ago, when Hope Ettore and her husband adopted Nguyen Le Hung, the little boy was covered with scabies and nearly half of his face was covered by a tumor.

Now Hung (new name is Samuel) is a healthy 18-year-old young man with a delicate face. “I graduated from high school and is about to go to college,” says Hope, 51, of San Diego, California. The 17-year journey of raising an ordinary child has been arduous, and for her and her husband, that difficulty is much more than that. The day Samuel first came to the US, the doctors told him that he would not be able to talk or go to school normally.

In the 1990s, Ms. Hope worked as an epidemiologist in Southeast Asia. Daily contact with poor, sick children, her wish is to one day be able to adopt one of them.

“I always pray to God to guide me. One night, I dreamed that I was walking in Ho Chi Minh City,” she said. Thinking this dream is a signal, in 2005, she and her husband, John Ettore, contacted the orphanage in Go Vap District, Ho Chi Minh City, and expressed their wish to adopt a child. The orphanage introduced her and her husband to a boy with hemangiomas and other health problems, named Nguyen Le Hung, 16 months old. Seeing the picture sent by the orphanage staff, Hope and her husband were stunned, not thinking that the child’s condition was so serious.

The couple decided to visit Hung in person. According to the papers, the boy was born in 2004, from Dong Phu, Binh Phuoc. The father’s name is saved as Le Xuan Hung, the mother’s name is Nguyen Thi Lien. At sixteen months old, he was supposed to be able to walk, but Hung fell into the crib like a newborn baby.

Orphanage officials said, Hung was a premature baby along with another twin brother. Because he was sick, his parents sent him to an orphanage, leaving only the healthy child.

They went back to the orphanage a few times to visit their children, intending to take them home because they missed them too much, but the staff said that if they don’t get medical care, Hung will die, and advised the family to let the child stay, find someone to adopt to be adopted. abroad for treatment.

The first time she saw the boy, Hope approached to ask. “The moment she smiled and smiled deeply in my heart, reminding me to help her,” she said.

She and her husband took Nguyen Le Hung to adopt and changed his name to Samuel Ian Ettore. Two weeks after returning to the US, she gave birth to her youngest daughter. The family of four now has three more members, a newborn girl, Samuel, and another adopted boy, also 16 months old, from Ethiopia.

Initially, Hope and his wife supplemented with nutrition, cured infections, and helped Samuel get the best health for surgery to remove the tumor. But the first few months, the boy was sick and timid, constantly crying.

Samuel’s tumor was filled with blood vessels, so the risk of fatal bleeding was always present. Hope and her husband carried their children around the big and small hospitals, met dozens of doctors, but no one dared to operate on Samuel. After their efforts, Hope and her husband broke down in tears when a doctor nodded in agreement.

Because the tumor was so large, the medical staff had to stage the surgery. In total, the Vietnamese boy underwent 5 facial surgeries and two eye surgeries to regain his normal vision and appearance.

The difficulty does not stop there. Samuel is slow to speak, slow down, slow to absorb. The boy was given physical therapy by his parents, movement exercises, speech therapy, and behavioral therapies to treat developmental delays. At one point, Hope and her husband questioned their own patience. “I wondered if she would have to depend on us for the rest of her life,” the adoptive mother recalls.

Every day, in addition to taking their children to treatment facilities, the couple and other family members join hands to help Samuel change his fate. “Not only did I have to spend huge medical expenses, my parents and siblings taught me to walk, taught me to speak, read to me… Thanks to them, I grew up like a normal child” , said Samuel, who has now found a paying job.

Devoted to treating their child, Hope and her husband at the same time frankly told Samuel about his origin. As the only Asian member of the family, Samuel often looks in the mirror and sees himself as different. But living in a place where there are not many people of Asian descent, he has few opportunities to explore the culture of his homeland.

Fearing that her son would lose his connection with his roots, Hope took him to traditional festivals held by Vietnamese people in the US, and bought books about Vietnam for him. “My mother told me that my biological parents wanted me to have a new chance to heal,” Samuel said.

More than two years ago, Hope’s family was able to connect with the biological father of their Ethiopian adopted son. The reunion of the fourth son has given Hope even more motivation to find a family for Samuel.

The adoptive mother knows that, although he has little connection to the Asian community, Samuel’s form and interests are closely related to the blood flowing in him. “The boy told me that he really wanted to find his parents again. Surely they would miss him as much as he longed to find them. He also loves to eat Vietnamese food, especially pho,” the mother said.

Over the years, she repeatedly asked a Vietnamese living in the US on the group Kids Without Borders to find relatives for her children. But aside from their name and hometown, they had no clue.

Recently, the doctor said that Hope did not have much time left when the breast cancer had spread. Through a Vietnamese friend in college, she put information on finding the biological parents of a Vietnamese adopted child online, in two languages, and shared it across groups.

On May 26, a woman from Binh Phuoc village contacted Hope’s Vietnamese friend, claiming to be Samuel’s mother. Friends are helping Hope and Samuel connect with this person, conduct a DNA test. “I hope to have a result as expected. At that time, I can give Samuel the most meaningful gift of the age of 18,” said Mrs. Hope excitedly.

If she can connect her child with her own blood, Hope will go with Samuel to Vietnam to witness the reunion. The adoptive mother said that what she wanted when she met Samuel’s biological parents was to say thank you, for suppressing the pain of being away from her son so that he could be treated.

Although raising children and helping them through the most difficult days of their lives, for her, Samuel – Nguyen Le Hung is a great blessing.