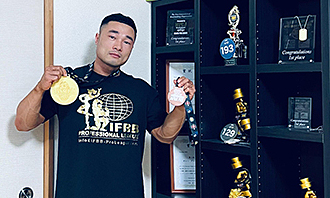 Seven years ago, when he broke up with his girlfriend, Luong Hong Son went to the gym to reduce his thoughts and stress. Unexpectedly, because of this decision, his life turned to another direction.

The most memorable milestone of a boy from Yen The, Bac Giang after seven years of practicing in the gym in Japan is winning a card Pro Card, the World Federation of Bodybuilding Federation (IFBB) professional athlete card that allows him to enter professional competition.

“My goal in 2022 is to pass the qualifying round so that in 2023, I will become the first Vietnamese to appear on the stage of Mr. Olympia – the world’s most prestigious bodybuilding championship stage held in Las Vegas (USA). “, Son, 30 years old, said.

This is an achievement that Son never thought of when he started coming to the gym in 2014. At that time, he and his girlfriend were both international students in Japan. Every day, after school, Son goes to work “crazy”, 8-12 hours a day, no longer paying attention to his girlfriend. From 51 kg, the 1m68 tall guy was only 47 kg when his girlfriend said goodbye.

Son decided to go to the gym to “relieve stress, beautify and increase self-worth”. The roommate tried to dissuade because it was expensive, not suitable for the economy of international students.

In order to have two hours of gym work every day, Son reduced the time he worked overtime in the evening. The practice fee is nearly half of the monthly living expenses. With no money to hire a trainer (PT), the Vietnamese international student had to self-study using YouTube or order fitness manuals from the US. Son also taught himself about nutrition, how to calculate calories as well as exercise methods. After six months, his weight increased 60 kg, toned body.

More confident about his body, Son increased his communication with Vietnamese groups in Japan and began to receive many inquiries about his training and nutrition. Seeing that everyone was interested in the gym, he imported American supplements for bodybuilders and sold it. In the first month, the profit earned is higher than the money for doing more manual jobs such as porter, restaurant assistant… before that.

In April 2016, Son passed the entrance exam to Kyushu International University, majoring in Business Administration. Going to school, but his mind at that time was only interested in bodybuilding. In the second year, Son decided to drop out of school to start an early career in this subject.

However, in order to stay in Japan under a business visa, Son must establish a company with a charter capital of at least one billion VND. Unable to hide from his family, he ventured to call his hometown to borrow money, but faced fierce opposition. His father, Mr. Luong Cao Cong also stated: “If you drop out of school, don’t bring your face back to your hometown”.

Son borrowed from relatives and friends to import supplements for bodybuilders from the US to Japan. In the first batch, he poured all his capital and decided to “play big”, in order to prove his ability to his father. Due to lack of research, some components in the new shipment were not circulated in Japan and were banned from customs clearance. Losing goods, the company stood on the verge of bankruptcy. Fear of being deported, with a debt of billions of dong hanging over his head, Son rushed to work. Real estate, second hand trade, hairdressing… whatever makes money, he does it, 15-16 hours a day.

“There were days when Son worked almost without sleep, driving around Japan to earn every penny. In the first half of the year, he had to borrow money to eat from friends, but he never complained,” Nguyen Viet Phong, A close friend who is also the person who opened a company with Son shared.

Using this place to cover that, after a year, the company gradually stabilized, but the profit was low. Son changed tactics, registered at the Evolgear Japan Open bodybuilding competition in Osaka city, in June 2018, in order to “polish” his name, hoping to sell more products. However, for the first time, Son did not reach the top 20.

“Where you fail, you have to get up there,” he reminded himself, and at the same time sought to understand the reasons for not making progress. After many nights of staying awake studying video tapes as well as intensive reading, the young man realized that his diet was not correct. A week before the exam, candidates must reduce water intake, reduce salt to help skin and muscles stick to the body, when on the competition floor, the body will be more balanced.

Two months later, at a bodybuilding competition in Fukuoka Prefecture, Son won the championship. He is more famous in the Vietnamese community in Japan, the number of followers on social networks has increased 2-3 times, and sales are also higher. At the end of 2019, Son was able to pay off all his debts. The company went from two people to 12 employees now.

Doing well, Son began to expand into other fields. In October 2019, his 100 m2 gym opened in downtown Osaka, also the first Vietnamese gym in Japan. In addition to the gym, Son now also opens a hair salon, a second-hand shop… Total monthly revenue is about two billion VND, 35% profit.

“No matter what, Son tries very hard, whether physically or at work. When working in my real estate company, he is often elected the best employee,” said Mr. Nguyen Duc Long, Son’s former boss. , is also the Vice President of the Japan – Vietnam Trade Association.

Still not forgetting the defeat in 2018 at the bodybuilding tournament in Osaka, in October 2020, Son re-registered at Evolgear Japan Open, which gathers 300 famous athletes from the kansai region (7 prefectures around Osaka) in Japan. Coming back for the second time, he won the championship. In 2021, he continued to become the champion of the West Japan Championships and Olympia Amateur Japan.

Now seeing that his son is passionate about bodybuilding, Mr. Luong Cao Cong no longer asks when he will return to university. As for Son, he is planning to build his own brand of nutritional supplements for bodybuilders right in Japan, but with a Vietnamese brand.

“This is happier than having a lot of money,” Son said.