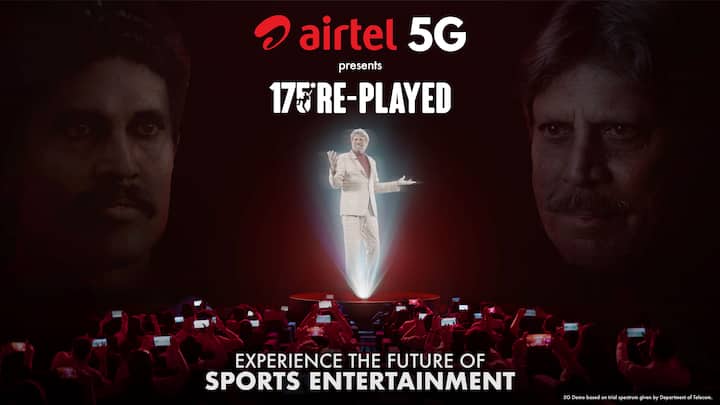 Airtel 5G: Cricket fans have another reason to celebrate. Bharti Airtel has been able to recreate the stadium experience of Kapil Dev’s famous 175* innings played against Zimbabwe during the 1983 Cricket World Cup.

Due to the strike by TV technicians, there was no recorded footage of the original match, but the telecom giant brought to life key highlights from the match through the 4K experience of ‘175 Replayed’. The first of its kind hologram interaction with the legendary cricketer added to the excitement of the event.

Testing its technological capabilities, Airtel offered select audiences a 5G enabled smartphone that could experience speeds of over 1 Gbps and latency of less than 20 milliseconds. This gave over 50 users a chance to enjoy the 4K video experience of the match. Users had real-time access to multiple camera angles, 360-degree in-stadia view, shot analysis and statistics, which made the experience more thrilling. On our way to transform the future of immersive video entertainment, this event aims to take the user experience to the next level.

Speaking on the success of the event, Randeep Sekhon, CTO, Bharti Airtel said, “Gigabit speeds and millisecond latency of 5G will transform the way we use entertainment. With today’s exposure, we begin to open up layers of endless possibilities for a highly personalized immersive experience in the world of 5G and digital.”

The interaction with the hologram of the legendary cricketer, a first of its kind in India, added to the excitement of the event. A 5G powered virtual avatar of Kapil Dev appeared on stage who interacted with the audience in real time and took them through some of the most important and memorable moments of his innings. “I am amazed by the power of 5G technology and see my digital avatar interacting with my fans as if I am actually there myself. Thanks to Airtel for bringing to life this wonderful effort and one of the most important innings of my career. Kapil Dev said while narrating his experience.

Randeep Sekhon said, “With 5G based holograms, we will be able to take the virtual avatar anywhere. It will be a game-changer for meetings, conferences, and live news, and will have many other effective uses. Airtel is all set with 5G to build a solid pipeline of innovative use cases for India in this emerging digital world. ,

As the country moves closer to 5G spectrum, Airtel is focusing more on the technology segment, giving viewers a glimpse of what 5G can bring to its customers. The in-stadia experience is the latest of several 5G events organized by the telco over the past year. In September 2021, the company hosted a live cloud gaming event on Airtel 5G, which featured pro-gamers like Mortal and Mamba.

The following month Airtel conducted India’s first rural 5G trial on the outskirts of Kolkata. The company has also launched the #5GforBusiness initiative and has partnered with several leading technology brands and companies to test 5G based solutions.

Disclaimer: 5G Demo based on trial spectrum given by Department of Telecom.